FIRST-CLASS | TAILOR-MADE: Spend 4 days in the Eternal City and discover its fascinating history, culture, and gastronomy. Enjoy elegant accommodations and skip the line at the Colosseum and Vatican Museums to discover ancient history and artistic masterworks. Cap off the stay with a walking foodie tour through the city’s trendiest neighbourhoods. 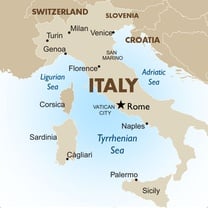 This journey to Rome explores the history and culture of the Eternal City. Staying in the elegant Hotel Twenty One, which offers stunning views of the Roman skyline and Pincian Hill, you’ll have a few days to explore the city’s ancient history and modern gastronomic culture. One day, venture into the past on a full-day tour that starts at the Colosseum to see where gladiators battled for the entertainment of Roman audiences and continues through the former imperial home of Palatine Hill and the Roman Forum. In the afternoon, skip the line to explore the Vatican Museums, one of the world’s largest museums, where masterworks by Raphael are only surpassed by Michelangelo’s breathtaking frescoes in the Sistine Chapel. Cap off the tour in St. Peter’s Basilica, the centrepiece of the Vatican and the world’s largest church. The next day, head on a foodie tour through the trendy neighbourhoods of Trastevere and Campo de’Fiori, where you’ll learn about local history and culinary traditions in between courses of wine and fresh pasta at local establishments.

At the end of your stay, you’ll head to the train station to connect to your next destination.

In the morning visit the 3 sites of the Colosseum's Archaeological Park: the Colosseum, one of the most famous monuments in the world, it was used for gladiatorial fights and wild animal hunts and it had a capacity for more than 50,000 people, the Palatine Hill, one of the seven hills of Rome where Rome has its origins and today a large open-air museum and the Roman Forum, for centuries the center of Roman public and economic life.

After lunch, the guide will meet you at the restaurant to continue the tour at the Vatican Museums, with its immense art collection built up by the Popes throughout the centuries. The itinerary includes Pio Clementino Hall, Laocoon and Apollo Belvedere, Maps Gallery, Candelabra Gallery, Tapestries Gallery and one of the most celebrated masterpieces in the world: the Sistine Chapel, with the breathtaking frescoes by Michelangelo.

After exploring the Vatican Museums, the tour will continue directly and without line into St. Peter's Basilica, the largest church in the world and symbol of the Catholic religion, where it will be possible to admire iconic masterpieces such as La Pieta by Michelangelo and the huge Baldacchino by Bernini.

The tour ends in the suggestive St. Peter's Square, dominated by Michelangelo's imposing Cupola and surrounded by the famous Bernini's double Colonnade.

Our Food Tour is the only Rome food tour designed by chefs!

Venture off the beaten path to experience the real flavors of Rome in the vibrant neighborhoods of Trastevere and Campo de'Fiori. Along the way, we'll share insider tips on Italian cuisine and introduce you to local food specialties, immersing you in Rome's rich culinary traditions. In between each delicious tasting, you'll get a glimpse into the history, culture, and architecture that define the Eternal City.

You'll finish with wine and fresh pasta prepared just for you at one of our spectacular locations in the heart of the city.

This is a leisurely-paced walking tour over uneven surfaces, but by the end you will have enjoyed a complete meal, so gear up your appetite!

Daily except Saturday: April to October