Iceland Beyond the Wall: Reykjavik & Akureyri

FIRST-CLASS | TAILOR-MADE: Game of Thrones might not be known for its tranquility, but television filming locations around Iceland offer that and much more. Begin your tour with a brief stopover in Reykjavik, Iceland's capital, before flying north to experience Akureyri, Iceland's gorgeous northern city. Touring along the way will reveal secrets beyond the wall and of the famed Golden Circle. 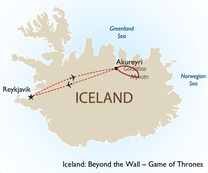 "This 7-day journey through the Seven Kingdoms is more than your average film set tour, taking you through the original Land of Fire and Ice, Iceland.   Start your quest in Reykjavik, a city known for nightlife and cafe culture that has grown up around Iceland’s first farm settlement.   Summer is the most popular time to visit and sees the capital bursting with life below a sun that barely sets. Still, if winter is coming, so are the Northern Lights! Excursions are available during the darker months to take you in search of this spectacular phenomenon.   Fly on to Akureyri. This is the largest town in Iceland’s north, a part of the country that sees few tourists and is often covered in snow year-round.  Visit local artists, then go on to see the surreal landscapes that lie ‘North of the Wall.’ A (hopefully) White Walker-free day of sightseeing awaits, taking you to Godafoss, the Waterfall of the Gods. Let your imagination run free in George R R Martin’s world, then beyond as you delve into the traditional folklore of Iceland, one filled with trolls and Hidden People. You’ll also hear some behind the scenes stories from the show, before unwinding at Myvatn Nature Baths.   Return to Reykjavik and set out to experience the Golden Circle – an incredible circuit just outside Reykjavik that showcases many of the region’s most spectacular highlights – and later enjoy the city at your own pace before your onward flight."

Once you have landed at Keflavik Airport in Iceland, please pick up your luggage and head through Customs and check-in with the bus transfer company. You will then be transferred to Reykjavik (via the main bus terminal). After checking into your hotel, enjoy some time at leisure before visiting FlyOver Iceland. Utilizing state-of-the-art technology, guests hang suspended, feet dangling, as the ride and film whisk across the myriad landscapes throughout the country; it serves an excellent introduction to the Land of Fire and Ice (transfers not included). The remainder of the day is yours to rest and use at your own leisure.

After breakfast, check out of your hotel and make your way to Reykjavik domestic airport (transfer not included) ahead of your flight to Akureyri, the capital of the north. Upon arrival at Akureyri, please take a taxi to your hotel (not included). The ride is short (10 minutes approximately) which is why there are no transfer services included to and from Akureyri airport. The remainder of the day is at leisure, and a stroll through Akureyri is highly recommended. Consider visiting Akureyri Centre, the many workshops and handicraft stores throughout the city, each featuring north Icelandic designs and products of various types and materials. There are also many "retro" cafes where you can relax over local beverages.

This is your chance to visit the "Land beyond the Wall" and see it brought to life with tales of the "Seven Kingdoms" by local guide Jon Thor Benediktsson, who also guided the Game of Thrones crew on set during filming in this area. Today, you will be entering the other worldly landscapes of Lake Myvatn where the scenes for "North of the Wall" were filmed. Now it becomes apparent why Game of Thrones production crew were drawn to this area as the majestic Waterfall of the Gods, Godafoss, greets you. According to the Icelandic Sagas, the waterfall draws its name from Thorgeir of Ljosavatn throwing his statues of the heathen gods into the falls when Iceland converted to Christianity in the year 1000.

Your next stop will be the magical places where the latest series of Game of Thrones were filmed. Here, you can try to relive the action in the locations seen in the series. No, you will hopefully not encounter any White Walkers, but with Iceland's rich folklore let the story telling guide boost your imagination with tales of trolls and Hidden People alongside curious facts about what happened behind the scenes of Games of Thrones. After a day of beautiful waterfalls, volcanoes, unusual lava rock formations, steaming hot springs, bubbling mud pools and mysterious landscape, you'll end the day with a splash at Myvatn Nature Baths. Not a filming location for Game of Thrones, but the calming waters relax you while imagining to be surrounded by other Free Folk. With a bit of luck the Northern Lights will entertain you during your soak, right before returning to Akureyri.

Following a morning at leisure in Akureyri, make your own way to the domestic airport in the afternoon ahead of your return flight to Reykjavik. Please take a taxi to the airport. After returning to Reykjavik, take a taxi to Skuggi Hotel to check-in for the next three nights.

If you only take one guided tour while you are in Iceland, then it has to be the Golden Circle. Combining natural and historical wonders, you'll experience Iceland's landmark attractions in one incredible day: the magnificent Gullfoss waterfall, the exploding hot springs of Geysir, and Thingvellir national park, site of the Viking parliament and over 1000 years of history. A classic tour, not to be missed! The duration of the tour is approximately 8 hours.

Reykjavik is a spectacular city; hip, friendly, dotted with cool cafes, funky stores, interesting museums, galleries, and superb restaurants, it is an excellent place to enjoy a day at leisure. Today, explore the city at your own pace, perhaps taking the time to visit the Perlan Museum or the National Museum of Iceland (admissions not included).

After breakfast and checking out of your hotel, board your bus for an airport transfer, stopping at the Blue Lagoon along the way. It is ideal for departing passengers in order to maximize their time in Iceland. The lagoon's warm geothermal water and natural active ingredients; mineral salts, silica, and blue-green algae help you relax and unwind while the lagoon's distinctive white silica mud gently cleanses and exfoliates the skin. The mineral salts balance and relax body and soul.