FIRST-CLASS | SMALL-GROUP: Discover the vibrant culture and history in some of Portugal’s most interesting cities and towns on a 7-day small group program. Travel with like-minded people as you enjoy the capital city, the famous University city of Coimbra, Porto and port wine tasting, plus a traditional Fado show and so much more! 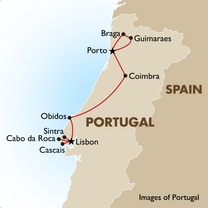 Start your tour in the capital of Portugal, Lisbon built on seven hills and situated on the edge of the Atlantic Ocean. Spend 3 nights getting to know this colourful city.

A sightseeing tour on an electrica (streetcar) takes you first to Alfama, the oldest district of Lisbon. It spreads down the southern slope from the Castle of Sao Jorge, a Moorish castle occupying a commanding hilltop overlooking the historic centre of Lisbon. Alfama is made up of a labyrinth of narrow streets and small squares. It is an historical quarter occupied by Fado bars, restaurants, and homes with small shops downstairs. Also visit Lisbon Cathedral dating back to 1150. There is time to wander the charming narrow streets of local neighbourhoods.
The afternoon is free but it is suggested to consider visiting the Belem Tower and the Monastery of the Jeronimos.

Next is a full day to nearby attractions. Head first to the elegant resort town of Estoril
followed by the colourful Bay of Cascais with its dazzling beaches and the cosmopolitan resort of Cascais. The main destination today is Sintra - an absolute “jewel”. This bewitching place with its fairytale atmosphere is set amid lush vegetation and mystical hills and has inspired many poets, writers and travellers for centuries. Spend time here including exploring Sintra's Castle of the Moors.

Leave Lisbon and travel north to the university city of Coimbra. En route, stop at the medieval coastal village of Obidos with its cobblestone streets and colourful houses. Afterwards, visit the gothic styled Monastery of Batalhas and the Sanctuary of Fatima, the site where three young shepherds saw an apparition of the Virgin Mary. On arrival in Coimbra, Portugal’s oldest University City, have a walking tour through the ancient streets and squares of the Old Quarter and the University of Coimbra. There are many archaeological structures in Coimbra which date back to the Roman era.

Heading north once more, arrive in Porto (also known as Oporto) for a 2 night stay. It is a UNESCO World Heritage city well known for Port wine and also for its ancient churches and monuments such as the Cathedral and the Church of Sao Francisco plus also modern buildings such as the Casa da Musica.

A tour here takes in the cathedral, the Tower of Clerigos and the impressive hall of Porto’s Sao Bento Railway Station. Porto is famous for its tawny and ruby ports so afterwards, descend to the banks of the River Douro and visit one of the local wine cellars in Gaia where there is the opportunity to sample some of these famous ports.

From Porto, travel out of town the next day to first Guimereas, Portugal’s first capital and the archaeological site of the pre-Roman Celtic settlement, Briteiros, dating back 2500 years. Continue to Braga, considered by many to be one of Portugal's most stunning cities with its impressive baroque style buildings including the Bom Jesus Sanctuary. Return later back to Porto. The next morning your Images of Portugal terminates.

Welcome! Your trip starts today with your arrival in Porto. Please make your own way to the joining hotel that is centrally located (details are in your travel documents). Whilst at your discretion, we recommend arriving and departing by train where possible within Europe due to this method of transport's minimal carbon emissions. In the evening, meet your tour leader and fellow travelling companions at a welcome meeting, usually held at 6 pm, where you will be given a briefing of what lies ahead on the tour. This is followed by a welcome dinner in a local restaurant - your group leader will know of some delicious options close by.

Discover Porto: Portugal's second largest city and the capital of the north that sits between the River Douro and the Atlantic Ocean. The World Heritage listed Ribeira district is filled with a collection of twisting alleys, crisscrossing staircases and baroque churches. On a guided tour, discover one of Portugal's most romantic cities. You will pass majestic bridges, medieval riverside district with cobbled streets, merchants' houses and cafes, stop by the cathedral, the Tower of Clerigos, and the impressive hall of Porto's Sao Bento Railway Station. Clerigos Tower offers sensational sweeping views across the whole city, while the grand train station and its historic entrance hall panels evokes a more refined age of rail travel. On your exploration today, discover lesser known parts of the city to tourists (in fact they are known well, but only to the local people and experts). Go under the skin of this beautiful city with an included tasting of some of the region's specialties, and go out and try some coffee and pastry in small, classic cafes, enjoying best local Port wine in a cozy local tavern with dishes like codfish and the Francesinha (Portuguese sandwich). You can spend the evening soaking up the atmosphere of this coastal town, strolling along the riverside or observing local life in action from one of many rooftop bars.

Today you will journey outside Porto to Guimaraes (approximately 1 hour). Portugal's first capital and the birthplace of the country's first king (the 'conqueror', which gives the town its name), the town consists of a well-preserved old city and an impressive castle. Explore Palace of the Dukes of Braganza located in the historical centre of the city and witness the grandeur of the Guimaraes Castle: one of the most complete medieval strongholds in Portugal, dating from the 10th century. As the believed birthplace of King Afonso Henriques, the castle is something of a national shrine. Next you will travel to Braga (approximately 30 minutes), considered by many to be one of Portugal's most stunning cities. It has long been a religious centre, and overflows with churches, monasteries, and chapels. The charm of this place lies in its impressive Baroque buildings, most notably the Bom Jesus Sanctuary. On the western slopes of Monte Espinho, the sanctuary is lead to by a magnificent criss-crossing staircase that has 14 different chapels, each representing a station of the cross. Venture back to Porto for the evening and night's stay.

This morning, farewell Porto and travel to your next stop, and base for the evening, which is the university city of Coimbra. Sitting dignified on the banks of the River Mondego, Coimbra was once the capital of the county, and its royal heritage can be felt in its ancient streets and buildings. Join your tour leader on a wander through the lanes and squares of the Old Quarter, passing the University of Coimbra -- the oldest in Portugal. This evening, regroup and experience more of Portugal's cultural heritage by heading to an included traditional Fado music show. Tonight's dinner is at your own expense.

Today you'll travel to Lisbon (approximately 2 hours), which is located on the banks of the Tagus (Tejo) River and is truly one of Europe's great cities. Much of Lisbon's character and charm lies in its beautiful renovated buildings, grand boulevards and impressive castles and churches. We will visit one of the most symbolic buildings in the city, Lisbon Cathedral, which was built on the site of an old mosque in 1150 by Lisbon's first bishop, Gilbert of Hastings. Inside are nine chapels, each with their own story to tell, and the wonderful Gothic cloister. We will also have time to visit the medieval citadel of Sao Jorge Castle. The citadel dates back to Moorish times and sits on the highest point of the Old Town. Although much of the original castle has been destroyed throughout history, some sections of walls and 18 different towers remain today. Look down on a city swarming with endless angular white houses and buildings with distinct red terracotta rooftops. The afternoon is free to make further discoveries of Lisbon - perhaps roam through the charming narrow streets of local neighbourhoods and see local life play out, visit Belem Tower (a wonderful building originally designed as a lighthouse) or the spectacular Monastery of the Jeronimos.

Travel outside of the city for a full-day excursion from Lisbon. First to Sintra, which is a jewel of Portugal. This bewitching place, with its fairy-tale atmosphere, is set amidst lush vegetation and rugged, mystical hills. The cooler climes made it a summer retreat for royalty, and it has drawn and inspired many poets, writers and travelers for centuries, including Lord Byron. Spend some time here exploring Sintra's Pena Palace and Gardens. The views across the Serra de Sintra mountain range are stunning. Then, continue to Cabo da Rocha: a cape which forms the westernmost extent of mainland Portugal and continental Europe. After the colourful Bay of Cascais and its dazzling beaches, stop in cosmopolitan Cascais. Once a quiet fishing village, later Cascais became a residence of the Portuguese royal court in the 19th century and is now a glamorous holiday destination of designer boutiques and upscale restaurants. During your free time here, why not sit down in one of the little restaurants and try some local delicacies? On the drive back to Lisbon along the coast in the afternoon, see a different perspective of the capital as you approach from the other side of the Tagus River. After a great full day of sights, enjoy this evening at your leisure in Lisbon.

There are no activities planned for today, and as such, you are free to leave at any time. Included with your tour booking is an airport transfer if you happen to fly out today. If you wish to spend some more time exploring Lisbon, we will be happy to arrange additional accommodation for you (subject to availability).