Depart Rome for a magical small group tour. From Abuzzo’s green wilderness to Apulia’s coastal seaside towns. Discover the unique sights of Pompeii, the grottos of Matera and fall in love with the Amalfi Coast. Take your breath away on an irresistible southern Italy program! 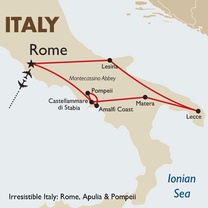 Join a small group of like-minded travellers on this first-class, 6-day round-trip adventure from the Eternal City, Rome. Explore the ruins of Pompeii, bask in the sparkling beauty of the Amalfi Coast, and roam the less travelled corner of Italy, including Lecce and the Apulia region.

With just one night included in Rome, you might want to book an extra day or two, particularly if it’s your first time. From the ancient splendour of the Colosseum and forum to the stately treasures of the Vatican, this city is one of Europe’s great capitals and a feast for the eyes, ears, and obviously, taste buds! Then set out to explore the small town treasures of the mountainous Abruzzo region, including Majella National Park.

Stay overnight in Lesina, your gateway to Italy’s less tourist-heavy east coast. Making your way to Lecce – known as ‘the Florence of the south,’ visit medieval sites, and the town of Alberobello. See the ancient cave dwellings of Matera, and take in the dramatic beauty of the mountainous Basilicata region. Then it’s time for your full day visit to Pompeii and the glorious Amalfi Coast. Uncover the real story of the city tragically buried in ash that fascinated our imaginations, then enjoy the pleasures of the Amalfi Coast, exploring seaside towns, forested mountains, and welcoming villages.

Your journey back to Rome takes you via the Montecassino Abbey, the scene of a decisive World War 2 battle. If you didn’t have time to spend a few additional days in Rome when you arrived, consider doing so now before your onward journey.

You leave Rome and get off the beaten track as you journey east to the Abruzzo region. With the Apennine mountains to the north and forests to the south, this green and wild region makes you feel like you're miles away from civilisation. Stop in Celano, a lovely little town framed by the Sirente mountain and famous for the grand Piccolomini Castle. Next, you travel past hill-top villages and silent valleys into the Majella National Park. The name means 'The Mother of Mountains'. The legend says Maya, the Goddess of the Earth was unable to save her dying son, so she died of deep sorrow and turned into the mountain here. You stop for lunch around the charming village of Bolognano before arriving to a national park and perhaps take an excursion. Then, stop for refreshments in Caramanico Terme at the foot of Majella. This village is known for its thermal springs and beautiful Gothic and Romanesque churches. You travel south-east and watch as the diverse landscape of Abruzzo change from mountains to flat and sandy coastline as you arrive in the early evening to Lesina.

You wake up in the stunning region of Apulia and head south to Trani. Known as the 'Pearl of Apulia', this historic stone built port and fishing village exudes sophistication. Have some free time to walk along the promenade in the marina or stroll through the historic centre and admire the medieval churches, cathedral, and historic Jewish quarter. Next stop is Polignano a Mare, a small, idyllic seaside town perched on the edge of cliffs. Enjoy your lunch surrounded by sun-bleached stone buildings and enjoy the Adriatic breeze. After lunch, discover Alberobello with over 1,500 small and rounded white houses. This UNESCO site features beehive-shaped buildings called trulli and are unique to Apulia. Take your time to meander around the narrow streets and marvel at the impossibly photogenic nooks. Feeling that La Vita e Bella, you leave Alberobello and ramble south to the heel of Italy, where Lecce, the 'Florence of the South' awaits. Arrive in the late afternoon, so you'll have time to spend your evening exploring hidden piazzas and alleys.

Buongiorno! Wake up and start the day with some pasticciotto, a local breakfast pastry. Enjoy free time in the morning by strolling through Lecce's old town and admiring its unique architecture. The city's Baroque style is so unique it got the name of its own, 'Lecce Baroque'. Also, while you explore the city, keep your eyes peeled for any cherubs and gremlins. Next, contrast the splendour of Lecce with the laid-back seaside towns of the Salento Peninsula. You leave at noon and travel through the ochre-coloured fields and olive groves to Torre Lapillo. This peaceful town is surrounded by beaches, so have your swimwear at the ready. Some time ago, these beaches have appeared on lists of the most beautiful unknown beaches in the world. After a refreshing dip in the water, try some of the fresh local seafood and have a look at the 16th-century Tower of St Thomas. You continue your journey along the coast via Gallipoli to Santa Maria di Leuca. Located on the southernmost tip of Italy's heel, the little town sits between two seas. It's steeped in history and the legends of its origin are influenced by various cultures. You have some time here, so visit the Sanctuary of Santa Maria de Finibus Terrae ("at the End of the Land" from Latin). According to the tradition, the sanctuary was converted from a pagan temple by Saint Peter who landed here. Cast your eyes for the last time at the magnificent vistas of the coast and journey inland to Lecce. Arrive back in the early evening for a final stay in Lecce.

You leave Lecce and head to the UNESCO site of Matera. This city is so perfectly adapted to the terrain that it blends in with its rocky surroundings on a cliff edge. Matera is known for its jumble of sassi, the ancient cave dwellings, houses and churches. Spend your time uncovering the rich history of this place and visit ancient churches with paintings on stone cave walls. You can also check out what the 18th-century dwellings were like and stumble upon locations used in Mel Gibson's Passion of the Christ. Your adventure takes you off the beaten track again as you journey into the heart of the Lucanian Dolomites and the village of Castelmezzano. One of the highest villages in the Basilicata region, it's located on a narrow ledge that drops away into a dramatic gorge. Find out about its rich history as you explore the village or go for a hike to see the ruins of the castle which gave the village its name. Alternatively, you can take a nature walk along the Path of the Seven Stones, a trail celebrating an ancient path connecting Castelmezzano with a nearby village Pietrapertosa. After a busy day, you travel through the hills and mountains of Basilicata towards the west coast of Italy, where you spend two nights in Castellammare di Stabia.

On this day, discover the many faces of the region of Campania. Your first stop of the day is Pompeii, the ancient city that was buried in 79 AD with the eruption of nearby Mount Vesuvius. There was no time to flee, so the city and its people were tragically frozen in the volcanic ash. You have three hours to uncover this city and get a glimpse into the way the Ancient Romans lived. After your time travelling in Pompeii, you head to the glamourous Amalfi Coast. Pastel-coloured houses and villas, chic boutiques, gourmet restaurants, this is La Dolce Vita at its finest. Add mountains plunging into the sea, verdant woodland, and sheer crags and you'll understand why this Italian heaven boasts the UNESCO status. You stop in Positano, which looks like a colourful multi-tiered cake dramatically clinging to a sea-cliff. Find a restaurant to enjoy your lunch and drink in the magnificent views over the Tyrrhenian Sea. Then peruse the local boutiques, visit picturesque Santa Maria church, and take amazing photos as you meander through the pastel-coloured streets. Alternatively, walk down the steps to the beach for a swim and some sun. In the late afternoon, you arrive back in Castellammare di Stabia where you can enjoy the rest of your afternoon and watch the sunset with a drink in your hand.

In the morning, you travel north to face Mount Vesuvius. In the ancient times, this mountain was considered to be divine and had connections to the power of Jupiter - god of sky and lightning. Legends say that the giants used to inhabit the volcano, which explained the loud noises and rumbling. But in 79AD Mount Vesuvius exploded and buried the city of Pompeii. Ensure to wear sturdy boots to hike up to its crater for panoramic views. After this exciting start of the day, you travel up north and have lunch en route to the Montecassino Abbey. Sitting atop of the mountain above the town of Cassino, it's a sight to behold. Destroyed numerous times, it always returns in its stunning form. In the past, a working monastery and a pilgrimage site, this place was a centre of art, culture, and learning. It was also the scene for a decisive battle near the end of the World War II. You've got time to stroll through the cloisters of the monastery, admire fabulous frescoes and mosaics, and contemplate the turbulent history and violence of war. Breathe in the mountain air and cast your eyes on the lovely landscape before you travel north and arrive in romantic Rome in the evening.