Journey to Spain and Morocco

FIRST-CLASS | ESCORTED COACH TOUR: Discover the quintessential highlights of Spain and Morocco on a 16-day program. In Spain, visit Madrid and classic Andalusian cities. Then, board a ferry to Morocco, crossing the strait of Gibraltar to explore Casablanca, Marrakech, Rabat and Fez. Relax in Costa del Sol to complete this interesting two country tour. 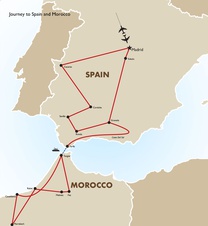 This 16-day Spanish and Moroccan vacation traces the intertwined history of these two countries as it ventures to Madrid, Seville, and the Costa del Sol in Spain before exploring Casablanca, Marrakech, and Fez in Morocco. It features first-class accommodations and shared tours.

Your journey begins in Madrid, the Spanish capital defined by its historical buildings and rich history of art. A panoramic tour will take you to historic landmarks, including the Hapsburg mansions of the Barrio del Moreria, the royal palaces of Plaza de la Villa, the Prado Museum, and the district of Salamanca. End your day with a double-dose of Spanish sport icons at Las Ventas Bullring and the Santiago Bernabeu Football Stadium. From Madrid, hit the road and journey to Caceras, defined by its architectural blend of Roman, Islamic, Gothic, and Italian influences. Reach Cordoba, where you’ll tour the Jewish Quarter, before heading to Seville, the capital of Andalusia. Admire the exterior of the second-largest Catholic cathedral in the world and stroll alongside the massive palace of Plaza de Espana before enjoying a Flamenco tour in the evening.

Enjoy a break from history as you head to the Costa del Sol, the sunny stretch of resort towns and beaches in the south of Spain. Spend a day at leisure in this famous tourist area, suntanning on the warm beach and refreshing with a dip in the waters of the Mediterranean. After recharging in the Costa del Sol, head to Tarifa to rid the ferry across the Strait of Gibraltar and arrive in Tangier, Morocco. Connect south to Casablanca, where you’ll have some leisure time to acclimate to this North African nation.

A city tour of Casablanca will showcase the best of this European-influenced city. You’ll head down Anfa Boulevard and admire the grand exterior of Hassan II Grand Mosque, the largest mosque in Africa. Continue to Marrakech, an oasis in the Atlas Mountains. A sightseeing tour will take you along Koutoubia Tower to the Saadines Tombs and into the souks surrounding Jma El Fna Square, where you can barter for spices and jewelry and watch snake charmers and musicians ply their trades. Hit the road again and reach the capital of Rabat, where you’ll see the exterior of the Royal Palace before heading to Mohamed V Mausoleum and Hassan Tower. Complete the day with a visit to the former imperial city of Meknes, where you’ll visit the Mausoleum of Moulay Ismail, the only mosque in the nation that allows non-Muslims to enter.

End your time in Morocco in Fez, another former imperial centre, where you’ll pass the Seven Gates of the Royal Palace, see the Jewish Quarter, and tour the medina, the walled old town that has preserved life as it was 500 years ago. Return to Tangier on the coast and ride the ferry back to Tarifa, Spain, before connecting back to the Costa del Sol for another day of leisure on the sunny beaches.

On the final leg of your journey through Spain, you’ll head to Granada to learn about the last stronghold of the Moors before they were expelled from the country in 1492. Explore the Alhambra complex, arguably the greatest Moorish accomplishment in the country, and the Generalife Gardens. The next day, head to Toledo to explore a city that personifies the blend of the three religions that define Spain: Christianity, Judaism, and Islam. Learn about the town’s spiritual history and visit a Damasquinado factory before returning to Madrid, where your tour ends.

Meet and greet at the airport. Take a transfer to your hotel. Rest of the day is at leisure.

Discover the beauties of the city with a guided city tour. Barrio de la Morería, the Hapsburgs District, Puerta del Sol, Plaza Mayor and Plaza de la Villa; the Madrid of the Bourbons and the complex town planning schemes of Charles III, the Royal Palace, Cibeles and Neptuno Fountains and the Puerta de Alcalá. The contemporary Madrid with areas such as Gran Vía, Castellana, the district of Salamanca, Plaza Castilla and Parque del Oeste, as well as commercial and financial areas of Modern Madrid, the emblematic Las Ventas Bullring and the Santiago Bernabéu Football Stadium.
Afternoon at leisure to continue exploring the wonders that the city has to offer.
Join your fellow travelers for an authentic Welcome Tapas Dinner at a local restaurant.

Bond for Andalusian soils, back in Spain, we drive to Caceres, considered a World Heritage site because of the city's blend of Roman, Islamic, Northern Gothic, and Italian Renaissance architecture. Walkthrough it's Plaza Mayor and the Old Town with its famous Medieval Quarter. We continue towards Cordoba, once the capital of the Caliphate.

Discover the impressive tour of Cordoba´s Mosque (entrance included) and other sites that will ease our mind and spirit strolling through its narrow winding streets of the Jewish Quarter. In the afternoon, continue your journey towards Seville.

Morning city tour of the Andalusian capital, Seville. Visit the Cathedral, the second largest in the Catholic world after St. Peters in Rome. Continue to Santa Cruz quarter, the natural scenario of Carmen as well as the myth of Don Juan; Continue to Maria Luisa Park and Plaza de España.

The afternoon is at leisure for you to enjoy the city of light.

After breakfast at the hotel, we will drive south passing through typical Andalusian villages to reach Ronda. Enjoy some free time to admire this town of Celtic origin and the marvelous view of the valley and mountain range. We continue our journey with an authentic Olive Oil Experience at a local Almazara, LA Organic. Walk through their olive tree fields and taste their organic olive oil production. Bond for the beautiful Spanish Mediterranean coast, we will continue to Costa del Sol.

After breakfast at the hotel drive along the picturesque tourist route of Costa del Sol, arrive in Tarifa where a ferry boat will be used for a short and interesting crossing of the Strait of Gibraltar towards Africa. Arrive in Tangier, disembark, clear customs, and drive southwards to Casablanca, current industrial and economic capital and the most populated city housing 10% of the country population.

Guided city tour through the most interesting sections of the city, Anfa boulevard, Nations square, residential areas and visit from the outside of the Hassan II grand mosque. Departure towards Marrakech. Marrakech's capital of the South is located within an extensive oasis between the Atlas Mountains and the pre-desert area. City sightseeing, including the Koutoubia Tower, twin tower of the Giralda in Seville, Saadian Tombs, and Bay Palace, walk around the medina, souks, and the magic Jma El Fna Square, which is packed with fortune tellers, snake tamers, acrobats, dancers, all making the center of the city an open-air theatre that requires the participation of the audience.

Breakfast and early departure to Rabat. Visit the capital of the country, Rabat. Visit the exterior of the Royal Palace, the Mohamed V Mausoleum, and the Hassan Tower. Continue to the Imperial City of Meknes, where you will visit the Walls of Bab el Mansour and the Mausoleum of Moulay Ismail, the only mosque in all of Morocco where non-Muslims are allowed. Arrive in Fez.

Enjoy a morning city tour of the most ancient and monumental of the Imperial Cities visiting the most interesting points: the 7 gates of the Royal Palace, Jewish Quarters or Mellah, the gate of Bab Bou Jelous, and a walking tour of the "Medina" (Old City), declared World Heritage Site. Afternoon free.
Optional dinner with show.

After breakfast at the hotel departure to Tangier. Transfer to the pier to board the ferry to return across the strait of Gibraltar back to Spain. Drive towards the Costa del Sol.

Day at leisure for you to enjoy the wonderful beaches of the Costa del Sol and surrounding areas.

Enjoy your daily breakfast at the hotel and depart to one of our favorite jewels in Spain, Granada. With its breathtaking monumental environment, we will visit the world-famous Alhambra complex (entrance included) and Generalife Gardens.

After some time at leisure, join your fellow travelers to experience the most authentic Gypsy Flamenco show including dinner.

Bond to the impressive Imperial city of Toledo, World Heritage City, where the three cultures Christians, Moorish and Jewish, have lived together for centuries. Enjoy a guided city tour of this historical old town through its narrow streets. Continue to Madrid.

After breakfast at the hotel transfer to the airport.