FIRST-CLASS | SMALL GROUP: Starting from London, enjoy historic sites, scenic landscapes, beautiful lakes and quaint towns on this journey which includes stops in Stratford, York and Keswick in the Lake District allowing you to become acquainted with some of England’s most spectacular countryside en route to Edinburgh. 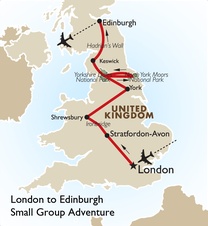 This small group experience (maximum 16 participants) gets you off the beaten track so you get a real feel for the country. Our guides are hand-picked for their pride and passion for their country. Transportation is in modern Mercedes Benz mini-coaches and accommodation is in a combination of guest houses and B&Bs.

Departing from London, you travel to Shakespeare country arriving later in the day in Stratford upon Avon. Spend time here getting know the town after which visit Ironbridge, a UNESCO World Heritage Site and the first bridge constructed of iron which had a considerable influence on developments in the fields of technology and architecture. Stay in Stratford for 2 nights.
Enjoy a full day to North Wales visiting Conwy with its 13th Century medieval castle followed by Snowdonia National Park with its dramatic mountain scenery which includes the former Dinorwic slate quarry now home to the Welsh National Slate Museum. Return to Stratford via the spectacular Llanberis Pass in Snowdonia.

The next morning drive to the Peak District National Park in Derbyshire. Arrive in Castleton, a picturesque town in the High Peak. Then visit Chatsworth House, the stately home of the Duke of Devonshire, one of the most visited houses in the UK with its priceless collection of furniture, paintings and sculptures. Eventually arrive in York where you will stay for the next 3 nights.

Your next day is either free to explore York on your own with its interesting museums, city walls, impressive cathedral, York Minster and its old narrow twisting streets and alleyways or you can take an optional tour to either Knaresborough, a pretty, historic market and spa town or Ripon, a cathedral city and market town. This is followed by exploration of the Eastern Dales with its beautiful scenic countryside and quaint villages.

The following morning, drive to Yorkshire’s North Sea coast via the wild and rugged North Yorkshire Moors National Park. Arrive at the old historic port of Whitby, former home of Captain Cook, the explorer after which drive down the coast to Robin Hood’s Bay, a small, quaint and picturesque fishing village. Later, return to York.

Your next stop is Keswick in the Lake District. En route, traverse the Yorkshire Dales National Park with its beautiful river valleys stretching to the Pennine mountain range. On arrival in Keswick, you will have free time to spend exploring this pleasant market town where you will spend the next 2 nights.

The next day starts with a visit to Castlerigg to see the site of the British stone circles originating from around 3000 BC during the Neolithic era and also enjoy panoramic views of the surrounding mountains. Then continue to Ullswater, described as Britain’s most beautiful lake, after which arrive at Lake Windermere where you can take an optional cruise on the lake. Then visit William Wordsworth’s former home, Dove Cottage in Grasmere.

Leave the following morning heading north to Scotland travelling through the dramatic Hartside Pass arriving eventually at Hadrian’s Wall built by the Romans to keep out marauders from Scotland. Cross into Scotland and visit the town of Jedburgh with its ancient abbey. Before arriving in Edinburgh where your tour terminates, stop at Scott’s View, a favourite viewpoint of the novelist and poet, Sir Walter Scott.

The Phoenix Hotel is conveniently located in central London, 5-minutes away from Hyde Park and overlooking one of the capital's reputed Garden Squares. The hotel is also in the vicinity of local attractions such as Oxford Street and Regents Street, Hyde Park, Earls Court Exhibition Centre, London City Centre and the Knightsbridge. Here you are less than 5 miles from Bayswater Tube Station and 3 miles from London Eye and the Buckingham Palace. Strategically placed, the hotel is surrounded by bars and restaurants; and stores displaying some of the world's famous brands. The beautiful Kensington is less than a 20-minute walk away, while Knightsbridge is merely a mile away.

Please make your own way to the starting point at Stance 3, Greenline Coach Terminal (Bulleid Way, Victoria, London). The tour departs at 9:00am, so ensure you arrive at least 30 minutes earlier. Departing from London you will make your way to William Shakespeare's birthplace Stratfordon-Avon, home to the Tudor thatched cottage and gardens of his wife, Anne Hathaway.

You will have time to explore the magnificent village of Stratford and enjoy lunch, before continuing to the World Heritage Site of Ironbridge. Set in a stunning forested gorge on the River Severn this historic valley boats the world's first ever iron bridge and a host of attractions to choose from. It was once described as the most extraordinary district in the world.

This morning, your tour will take you into the heart of North Wales. You will travel through beautiful green valleys and lovely little towns and villages then visit the medieval castle of Conwy, built by Edward I in the late 13th Century.

Explore the mountain scenery of the Snowdonia National Park including the huge Dinorwic slate quarries and the dramatic Pass of Llanberis in the shadows of Wales' highest peak. You will hear tales of Owain Glyndwr and the Welsh struggles for independence before travelling back through the borderlands into England.

Head north east from Shrewsbury to the hills of the Peak District National Park. You will take a scenic route through the Park to the village of Castleton then in the afternoon you can visit the famous mansion house and gardens of Chatsworth, home to the Cavendish family, Duke of Devonshire. Chatsworth is often named the UK's favourite country house and a visit will reveal some of the finest collections of furniture, priceless paintings, Old Master drawings and neo-classical sculptures.

Finally today, you will arrive in York.

Today you have a choice of things to do. You can spend the whole day at leisure exploring the medieval heart of York, a city whose rich history goes back to the time of the Romans, Vikings and Normans. Visit some of the fascinating museums, the amazing York Minster or just lose yourself in the maze of narrow streets and ancient city walls.

Alternatively, you could join your guide on a half day excursion into the Yorkshire dales visiting the historic market towns of Knaresborough or Ripon and some of the attractive little villages and beautiful countryside of the Eastern Dales, followed by a free afternoon in York.

You will leave the London based tour here and be picked up tomorrow by the tour bus from Edinburgh. Your driver/guide will let you know all the details of pickup times for the next day.

This is a leisurely day that gives you the flexibility to spend more time exploring the medieval heart of York before joining our excursion to the North Sea coast of Yorkshire. Our journey begins in the late morning when we head for the magnificent North Yorkshire Moors National Park. Lunch will be in Whitby, a bustling fishing port and the inspiration for the fertile imagination of author Bram Stoker, who stayed in the Royal Hotel on the western side of Whitby while writing his famous novel Dracula.

After lunch, and free time in Whitby, we travel to the fishing village of Robin Hood's Bay, a perfectly preserved conservation village of winding lanes and narrow alleys before returning towards York.

The minicoach cannot access the main village because of local restrictions. The coach will drop you at the top of the village and you must walk down (and back up!) a steep hill to reach the old village centre.

This morning, you leave York and will be transferred to Yorkshire Dales National Park, home to outstanding scenery, wildlife and cultural heritage. You will then continue to the Northern Dales, the centre of the Dales cattle trade. Beyond the remote hills of the Yorkshire Dales you find the market town of Keswick.

You will be dropped at your accommodation and are free to enjoy the rest of the day in the lively town.

This morning, head a short distance out of town to the mysterious standing stones at Castlerigg, thought to be the scene of many ancient rituals. You will drive along the shores of the Ullswater, described as England's most beautiful lake and may wish to take a walk there. The next stop is at Lake Windermere which offers the delightful options of a leisurely cruise on the lake, or a picnic lunch with views of the mountains.

After lunch, head to the picturesque conservation village of Hawkeshead where William Wordsworth attended grammar school and nearby Grasmere where you could explore Wordsworth's Dove Cottage or enjoy the Wordsworth daffodil garden by the River Rothy.

Hadrian wall and return to Edinburgh

Leaving the Lakes behind us we start our climb of Hartside Pass which stands at over 1900ft. On a clear day, the hills and mountains of Scotland and the English Lake District are clearly visible as you follow the route of the old sheep drovers between England and Scotland. Stopping at Hadrian's Wall, built by Emperor Hadrian to keep the Scots out of the Roman Empire, there is an opportunity to explore some of the Roman remains and walk in the footsteps of the Roman Centurions who patrolled this desolate frontier.

Following the ancient Roman Dere Street, you cross into Scotland and continue on to the Border town of Jedburgh for refreshments in the shadow of the ruins of Jedburgh Abbey. Your final stop is at the world famous Scott's View, encompassing outlooks of the River Tweed and the Cheviot Hills that broadly form the Scottish-English border before continuing north to Edinburgh.

The tour ends at Rabbie's Cafe (Waterloo Place, Edinburgh) around 7:00pm, and you are free to make your own arrangements from here.

Jurys Inn is one of the most centrally positioned hotels in Edinburgh, located just off the famous Royal Mile on Jeffrey Street in the Old Town and surrounded by beautiful architecture. Our hotel in Edinburgh is less than a two-minute walk from Waverly Train Station and a 5-minute walk to Edinburgh Bus Station. Our prime city centre location also means that Jurys Inn guests are a short 15 minute walk from Holyrood Park, which is one of many Edinburgh gems that offers a "unique historic landscape" bursting with heritage and plenty of hills and 'crags' to explore.

Whether you're looking for hotels in Edinburgh for business at the International Conference Centre, or touring Edinburgh Castle and the sights of historic Scotland's capital, our Edinburgh hotel ensures all your destinations are within easy - and always interesting - walking distance.

Please make your own way to the departure point for the tour on Day 2. Ensure you arrive at least 15 minutes prior to scheduled departure time.

Because we believe in time off the bus and give you opportunities to take nature walks we recommend you bring suitable clothing and footwear for your tour. Scotland and England can be a wet!! If you have mobility problems or special requirements please let us know when booking. Unless otherwise notified passengers are restricted to one medium sized suitcase/bag (maximum 15 kilos) and one carry-on bag per person.