Magic Cities of the North & East by Train

FIRST-CLASS | RAIL: Discover the rich history and culture of some of Germany’s most famous cities on this trip through the north and east of the country. Travelling by train, you’ll start in Frankfurt and work your way across the nation with stopovers in Cologne, Hamburg, Berlin, and Dresden to explore their legendary highlights. 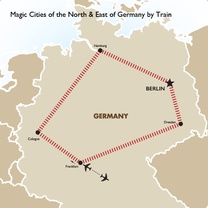 This 7-day German vacation takes to the most famous cities in Germany’s north and east, including Frankfurt, Cologne, Hamburg, and Berlin.

Your trip to Germany begins in Frankfurt, Germany’s financial capital and international airport hub. While most travellers are familiar with Frankfurt due to the airport that services over 60 million passengers each year, the city proper deserves some attention. A private tour will showcase some of its landmarks, from the butcher shops and delicatessens of Fresgass to the half-timbered homes of the Altstadt to the towering glass of the skyscraper district. You’ll see the Old Opera House and stop by some popular city museums before heading to Cologne by train. Cologne boasts over 2,000 years of history, having been founded by the Romans. You’ll find remnants of the city’s ancient past in the many ruins and diverse architectural styles. A walking tour will showcase its most famous sites, from Cologne Cathedral, the most popular attraction in Germany, to the many Roman ruins that dot the cityscape.

Continue your Germany vacation by heading to Hamburg, Germany’s second-largest city and undeniably one of the coolest cities in Europe. Known for its port culture, startling architecture, and immense contributions to the history of music (the city has been home to the likes of Gustav Mahler, Felix Mendelssohn, and the Beatles throughout its history), Hamburg has undeniable style. A walking tour will take you through the trendy warehouse district and the sinful mile of St. Pauli before touring St. Michael’s Church, one of Germany’s best Baroque churches.

Pass southeast to Berlin, the nation’s capital and the king of cool in Europe. Berlin has historical treasures to outmatch most cities, but it’s also one of the most vibrant capital cities on the planet. A city tour will showcase some of its most famous historical sites, such as Brandenburg Gate, Checkpoint Charlie, and Potsdam Square. Also be sure to experience some of the city’s famous culture while you’re here, whether that means shopping for designer brands at the KaDeWe department store, taking in a symphony at the opera house, or getting a taste for its famous nightlife at one of its many clubs and bars.

The final highlight on your German vacation is Dresden, which was destroyed during World War II but has since been rebuilt into one of the loveliest cities in the country. Take a private walking tour to see the Frauenkirche, the Dresden Opera House, and Imperial Zwinger Palace before heading back to Frankfurt to end your trip through Germany.

Arrival at Frankfurt airport and transfer to your hotel. Private tour of Frankfurt with a driver-guide (2.5 hrs). Visit the beautifully restored Römerberg, on the shore of the Main River. Visit the city's museums, the quaint "Fressgass" alley, the old Opera and the elegant Goethestrasse Street. Other highlights include the former residence of Goethe, the Paulus Church and wonderful city views from the Hauptwache.

Transfer to the train station where you board a train for Cologne (travel time: 1:10 hrs). Arrival in Cologne and transfer to your hotel. In the afternoon you'll enjoy a private 2-hour walking tour of the city. The great metropolis on the Rhine River, Cologne is the fourth largest city in Germany in terms of population and has a great tradition of art and history. The spires of the Gothic cathedral dominate the skyline of this old German city filled with numerous art treasures, lovely museums and a rich cultural agenda.

Transfer to the train station where you'll board a train to Hamburg (travel time: 4 hours). Arrival in Hamburg and transfer to your hotel. In the afternoon you'll enjoy a private 2-hour walking tour of the city. Visit this historical warehouse region, the largest in the world; also explore the district of St. Pauli, better known as the "sinful mile", the Baroque church of St. Michael's, nicknamed 'Michel', and the Alster.

Today continue to Berlin by train (travel time: 1:40 hrs). The rest of the day is free to explore the city of Berlin during a regular city tour by bus (Hop on / Hop off). You may start, finish, or pause this tour at any of the 18 different stops around the city.

Discover the city at your own pace. If you prefer, you may also remain on the bus and complete the entire city tour in 2 hours.

Continue exploring Germany's capital. Disembark at any bus stop to visit museums, go shopping or stroll through the different neighborhoods. Berlin captivates visitors with its extraordinary variety of monuments and rich cultural life.

Transfer to the train station where you'll board a train for Dresden (travel time: 2:10 hrs). Arrival in Dresden and transfer to your hotel. In the afternoon you'll enjoy a private 2-hour walking tour of the city. Dresden is one of the most beautiful cities in Germany. Visit the recently restored Frauenkirche church, the famous Dresden Opera House, the Imperial Zwinger palace and enjoy a stroll along the Elbe River.

Transfer to the train station where you'll board a train for Frankfurt (travel time: 5:20 hours). The tour concludes with your arrival at the Frankfurt train station or at Frankfurt Airport.