FIRST-CLASS | RAIL: Embark on an enchanting journey through the south of Germany, stopping in historical Nuremberg and vibrant Munich - which charms with its friendly citizens and gorgeous architecture. Later, discover wonders both old and new at Neuschwanstein Castle and in Stuttgart, and in between, take in the scenic countryside while relaxing on the train. 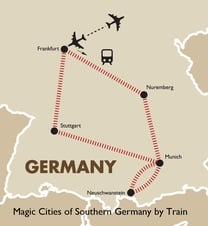 This 7-day Germany vacation takes you by train to some of the most popular cities in southern Germany, including Nuremberg, Munich, and Stuttgart.

Your German vacation begins in Frankfurt, Germany’s financial capital and international airport hub. While most travellers are familiar with Frankfurt due to the airport that services over 60 million passengers each year, the city proper deserves some attention. A private tour will showcase some of its most picturesque landmarks, from the butcher shops and delicatessens of Fresgass to the half-timbered homes of the Altstadt to the restored neighbourhood of Romerberg. From Frankfurt, take the train to Nuremberg, the second largest city in Bavaria and the centre of so much of its history. Take a private walking tour through the city centre to see the collection of historical landmarks, including Nuremberg Castle, the Gothic Frauenkirche, and the old Nazi Party Rally Grounds.

Continue by train to Munich, the capital of Bavaria and the nation’s third-largest city. Munich is walkable and has a small town atmosphere despite its population of 1.3 million. Your first day is at leisure to explore its charming collection of half-timbered architecture, Gothic churches, and beerhalls and restaurants serving up world-class beer and sausages. The next day, head on a walking tour to see the medieval square of Marienplatz, with its famous clock tower, and the famous street market, Viktualienmarkt. While in Munich, you’ll also head on a day trip to the fairy tale castle of King Ludwig II, Neuschwanstein, Europe’s most beautiful castle and the inspiration for Disney’s Sleeping Beauty.

Ride the train to your final destination, Stuttgart, the green city that’s Germany’s car manufacturing hub. While in Stuttgart, you’ll spend an afternoon learning about Mercedes Benz and Porsche, two of the world’s most popular premium cars. Spend the rest of your time in the city enjoying the large parks and public squares before connecting back to Frankfurt to end your trip to Germany.

Arrival at Frankfurt airport, optional transfer to your hotel. Private walking tour of Frankfurt with local guide (2.5 hours). At first glance, Frankfurt impresses visitors with its modern skyscrapers, but a closer look reveals a charming and pleasant city. Enjoy a walk through the beautifully restored Romerberg, on the shore of the Main River, the city's museums, the quaint "Fressgass" alley, the old Opera and the elegant Goethestrasse street.

Today board a train to Nuremberg (travel time: 2:05 hours). In the afternoon enjoy a 2-hour private walking tour of the historic city center. You may visit the old part of the city, where you will find most tourist attractions. Visit the castle, one of the most important medieval imperial palaces. Its privileged vantage point offers incredible views of the city. The castle has been home to every emperor of the Holy German Empire, between 1050 and 1571.

This morning board a train to Munich (travel time: 1:20 hours.). The afternoon is free to spend at your leisure. Take the time and discover the city at your own pace.

Discover the more than 8 centuries of history of the Bavarian capital in just three hours! Munich, home to the famous Oktoberfest, is also one of the most important cities to understand the history and culture of the German people. Starting at the Karlstor, passing by the church St. Michael, the Marienplatz square with the City Hall and its famous carillon, the Frauenkirche and many other attractions of the historic center.

Join a regular excursion to visit the most famous castle in Germany, Neuschwanstein. The castle was built by Ludwig II, who was also known as the Mad King because of his unique personality and eccentricities. The Bavarian king commissioned the construction between 1869 and 1886. He wanted it to resemble the medieval castles of the German knights combined with a neo-romantic style. This castle served as the inspiration for Walt Disney when he created the castle of Sleeping Beauty in Disneyland.

After breakfast make your way to the train station to board a train to Stuttgart (travel time: 2:15 hours). In the afternoon enjoy a tour of the city that is well known for famous car models such as Mercedes Benz and Porsche.

This morning board a train to Frankfurt (travel time: 1:35 hours). The tour will conclude in the city of Frankfurt or at Frankfurt Airport.