Melodies of the Danube: Budapest to Vilshofen

Discover the romance of Old Europe on this river cruise from Budapest. Before sailing, explore Austro-Hungarian landmarks in Budapest. Then board your river vessel and cruise the Danube, stopping in little-seen Bratislava, the Austrian cities of Vienna and Salzburg, and finally Vilshofen, where you’ll disembark. 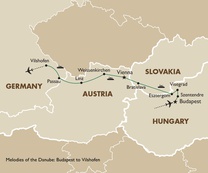 This 11-day Central European vacation takes you along the Danube from Budapest to Bratislava to Vienna and finally Vilshofen. It features deluxe accommodations, shared tours, and is a great way to explore several Central European cities on one itinerary.

Your journey begins in Budapest, the capital of Hungary and former co-capital of the Austro-Hungarian Empire. The grand city tour by bus will showcase some of the most popular landmarks in this gorgeous city, including Heroes’ Square, the Royal Palace, the Chain Bridge, and the stunning Hungarian Parliament Building, the largest in Europe. The next day, head on a full-day excursion to explore the Danube Bend by the water, seeing the old towns of Visegrad, Esztergom, and Szentendre. That evening, head to the Citadel in Budapest to enjoy a three-course meal and folklore show as you admire stunning views of the city lit up at night. On your final day, head on another quick city tour to see the sites you missed on your first few days, including Fisherman’s Bastion and Castle Hill.

In Budapest, you’ll board the AmaSonata, a 5-star river vessel that provides comfortable accommodations, most with twin balconies. Relax on the sun deck, enjoy cocktails in the main lounge, and dine on multi-course 5-star cuisine in the Chef’s Table restaurant. The AmaSonata will be your home during your cruise along the Danube. First stop is Bratislava, the Slovakian capital, known as the Coronation City since 11 kings and queens of the Austro-Hungarian Empire were crowned here. You’ll head on a walking tour of the often-overlooked city, either focusing on the local food in the old town or heading to reconstructed Bratislava Castle for views over the river.

Next stop is Vienna, the Austrian capital, where you’ll further explore the treasures of the Austro-Hungarian Empire. You’ll visit the famous Opera House and the former Imperial Palace, as well as have the chance to go bike riding throughout the old city. In the afternoon, take advantage of free time to visit one of the famous art or history museums in the city core. Continue along the river and reach Weissenkirchen, the gateway to Durnstein. You can head on a walking tour of Durnstein and see the Benedictine Abbey of Melk, or explore the hillsides and visit the fortress where Richard the Lionheart was held captive in the Middle Ages. In the evening, enjoy a folklore show as you taste vintages of Riesling and Gruner Veltiner.

While in Austria, you’ll have the option of visiting Salzburg, the birthplace of Mozart and musical epicenter, or touring the city of Linz and the Czech mountain town of Cesky Krumlov. After either touring the Czech countryside or visiting Mirabell Palace in Salzburg, you’ll cross the border into Germany and reach Passau, the City of Three Rivers. You can hike up to the Veste Overhaus, the massive fortress that overlooks the city, or head on a bike ride along the riverside. You’ll then reach Vilshofen, where you’ll bid farewell with an Oktoberfest celebration.

You’ll then disembark and connect to the airport for your flight home.

Budapest Airport to Hotel in Budapest

The property is centrally located, close to the National Museum, Vaci Street, St. Steven's Basilica and the Jewish Synagogue.

Are you ready to discover Budapest? We are prepared to show you the Hungarian capital in 3 hours so get ready to engage by this city. The Heroes Square, the State Opera House, the Hungarian Parliament, the Royal Palace and the Citadel (photostop) cannot wait for you to see them. The buses are air-conditioned and they all have a live guided. During the Grand City Tour you will also go on a walk in the Castle District to enjoy its unique medieval atmosphere. The tour ends in the city center.

Take an excursion into Hungary's history on this popular Danube Bend full day trip. Traveling by air-conditioned coach, you'll visit the gorgeous old towns of Visegrad, Esztergom and Szentendre, enjoy a three-course lunch and take a River Danube cruise - a highlight of any trip to Hungary!

Did you know that you can see Budapest illuminated (from the Citadel), have a delicious meal (3 course menu with wine) and also enjoy a great folklore show during one night? Your three-course meal begins with an aperitif, and is accompanied by wine. Then sit back and enjoy the varied music and dance of a traditional folkloric show. On your return to Budapest, you will have a marvelous view of the illuminated city.

Sights and Elements: The illuminated 'Paris of the East', traditional restaurant, 3-course menu with wine, folkloric show-program, and a marvelous view on the illuminated city from the Citadel.

Arrive in Budapest and board your luxurious river cruise ship.

Budapest offers an unmatched combination of culture, tradition and even a secret labyrinth of caves under the city. Your city tour begins with a visit to the Great Market Hall before going to both the Buda (hilly) and the Pest (flat) sides of the river. You'll see Heroes' Square and Castle Hill, home to the Fisherman's Bastion and Mattias Church. As an alternative, you can hike up to Castle Hill for breathtaking views of the city below.

Host to the crowning ceremonies of 11 Hungarian kings and queens between 1536 and 1830, Bratislava certainly has earned the title "Coronation City of Kings," as you'll discover during your walking tour. Or join a special "Tastes of Slovakia" tour. For a more active adventure, hike up to Bratislava Castle, offering magnificent views of the city.

*Please Note: Wine Cruise itineraries are modified and will not visit Bratislava. Instead of visiting Bratislava, guests will enjoy visiting the charming wine making town of Gobelsberg.

The "City of Waltzes" offers a wealth of gems and your city tour showcases its regal splendors, including the majestic Opera House and the former Imperial Palace of the Habsburgs. Conclude your tour in Vienna's historic city center and then visit St. Stephen's Cathedral, or discover Vienna by bike. During the afternoon, enjoy leisure time to further explore this iconic city.

After reaching Weissenkirchen, you'll be treated to several choices of excursions. Take a walking tour of Durnstein before visiting the UNESCO-designated Melk Abbey. Or opt for a walking tour of Weissenkirchen followed by an abbey visit. For a more culinary-focused experience, join a walking tour in Durnstein, then enjoy a wine tasting hosted by a local vintner and sample special apricot treats from a local boutique. If you prefer a more active adventure, join a guided bike tour to Melk or hike up to the fortress where Richard the Lionheart was once held. Later in the day, sail through the Strudengau Valley to medieval Grein for an exclusive visit to the more than 500-year-old Greinburg Castle, looming regally from above. While here, enjoy a folklore show and wine reception.

The ship arrives in Linz where you can opt for a full-day excursion to Salzburg and tour the historic center, Mirabell Gardens, Residenz Square and the Old Market. En route to Salzburg, stop at Mondsee, home of the Basilica St. Michael. Or join a walking tour through the old city center of Linz and by the Mozart House; or bike along the city's famed "Cultural Mile" and the Danube. Later in the day, visit the charming Czech mountain town of Cesky Krumlov.

Discover the city of Passau in one of three ways. Enjoy a walking tour and marvel at Gothic and Italian Baroque architecture and St. Stephen's Cathedral. Or choose between a guided bike tour along the Danube River, or a guided hike up to the Veste Oberhaus fortress. Later, cruise to Vilshofen, where you will be treated to a festive Oktoberfest celebration-- an AmaWaterways exclusive.

Bid farewell to Vilshofen and prepare for your flight home.