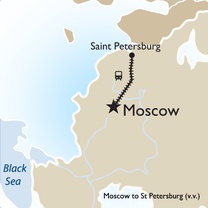 Click for more details on the Sapsan High Speed Train.

This 6-day trip serves as an ideal introduction to Russia, connecting its two most famous cities via a high speed rail journey. It is based on you joining on certain days of the week.

Spend two days sightseeing in one of the world’s great capitals, Moscow. A city tour gets things off to a good start, taking you to famed Red Square, surrounded as it is by the Kremlin and Saint Basil’s Cathedral. Then visit the Cathedral of Christ the Savior, the Novodevichiy Convent, Poklonnaya and Vorobievy Mountains, the Boulevard Ring, and more. Of particular note is the Novodevichiy Monastery, highlighted by the opulent Smolensk Cathedral, which towers 72 metres over the rest of the monastery. Its attached cemetery is the last resting place of Chekhov, Gogol, Khrushchev, and Yeltsin, among others.

Board your train to Saint Petersburg, Russia’s most European city, widely considered one of the most beautiful in the world. Staying close to Nevsky Prospekt, you’re ideally positioned for exploring the most famous streets, sights, and museums of Saint Petersburg. Your first day is devoted to the city itself. Stroll Nevsky Prospekt and Old Nevsky, see the impressive pastel façade of the Stroganov Palace, the imposing columns of Kazan Cathedral, and the colourful Church of Our Savior of Spilled Blood. Explore Palace Square, home to the Baroque Winter Palace, and a monument to Peter the Great. You’ll also have a chance to take in the stark architectural contrasts of Vasilievsky Island, and see the renowned Peter and Paul Fortress, dating back to the early 18th century. Your tour saves one of the best sights for last. Saint Isaac’s Cathedral will dazzle you from its shining gold dome to its lavish interiors recalling an era of unparalleled opulence and splendour.

Of course, one can’t visit Saint Petersburg without visiting the Hermitage museum. Once the private art collection of Peter the Great, the Hermitage now stands alongside the Louvre as one of the world’s greatest art collections. Spend a half day here enjoying works from the Stone Age, through the Renaissance and Impressionist periods, all the way up to 20th century works.

Transfer to the airport for departure, or stay on to discover more of Saint Petersburg.

The Arbat House Hotel is located in the Presnensky district, a calm neighbourhood in the centre of Moscow. The hotel is only a 3-minute walk from New Arbat and Old Arbat Avenues, popular for their eclectic charm, cafes and street musicians. The Kremlin, Red Square, The Pushkin State Museum of Fine Arts and the Bolshoi Theatre are all within a 15-minute walk. Rooms are equipped with standard amenities and include complimentary WiFi.

Moscow metro history began in thirties and it's various stations represent completely different styles and periods. Each station has it's own character. Carrying in excess of eight million people every day, more than New York and London put together, this system is one of the marvels of inner city transport.

Asteria Hotel is located on the embankment of Fontanka River, a short walk from St Petersburg's famous avenue Nevsky Prospekt.

Breakfast is served every morning. Asteria Hotel features a restaurant and a bar, offering Russian, European and American cuisine. Free WiFi is available in the entire hotel.

The staff will be happy to help you with tourist information, ticket reservations and excursion bookings. Shuttle service is provided upon request.

Gostiny Dvor Metro Station is a 10-minute walk from the hotel. Pulkovo International Airport is 13 miles away.

Today you will enjoy a half-day guided tour of St. Petersburg's most important sights. Start by exploring Nevsky Prospekt, the main street in the historical center of the city, planned by French architect Alexandre LeBlond. Nevsky gradually gets wider as you travel along it, and encompasses some of St. Petersburg's most impressive buildings, including Stroganov Palace, Kazan Cathedral, the famous Dom Knigi bookstore, and Church of Our Savior on Spilled Blood. Continue to the Palace Square, the most grandiose square in St. Petersburg, where the State Hermitage is located. This is linked to the Senate Square, with a bronze horseman monument to Peter the Great. Next, proceed to Vasilievsky Island, just across the river from the Winter Palace, connected to the mainland by the Palace Bridge and Lieutenant Schmidt Bridge. Visit the Peter and Paul Fortress as well as the Summer Garden. Finally, explore St Isaac's Cathedral, one of the city's most prominent landmarks and the fourth-largest domed cathedral in the world (after St Peter's, St Paul's and Florence's Duomo). It was designed by 19th-century architect Auguste Ricard de Montferrand in an orthodox style, with Renaissance and Baroque influences. The cathedral is cross-shaped and can accommodate about 14,000 people.

Half Day Tour of the Hermitage

The State Hermitage occupies six magnificent buildings located in the heart of St Petersburg. With the possible exception of the Louvre, there is no museum in the world that rivals the Hermitage in size and quality. Its collection is so large that it would take years to view it in its entirety; at last count, there were nearly three million works on exhibit! The museum is especially strong in Italian Renaissance and French Impressionist paintings and possesses outstanding collections by Rembrandt, Picasso, and Matisse. The origins of the Hermitage can be traced back to the private art collection of Peter the Great. Catherine the Great and her successors expanded the collection along with private purchases of the Western European aristocracy and monarchy. By the time Nicholas II ascended the throne in 1894, he was heir to the greatest collection of art in Europe. The Hermitage today presents collections of world culture and art from the Stone Age to the 20th century. As it is so enormous many visitors prefer to make several brief visits rather than one frenetic marathon tour. Collection highlights include the treasure gallery, Western European art, the Palace of Peter I, The Menshikov palace, General Staff Building, The museum of porcelain, Prehistoric art Antiquity, The Arsenal, Oriental art, Russian culture, Numismatics, The Hermitage's permanent exhibitions in the Konstantinovsky palace.