FIRST-CLASS | SMALL GROUP: Experience the dramatic and rugged beauty of the Scottish Highlands combined with the mystic and historic Orkney Islands. Visit ancient sites, battlefields and learn about the Viking invasion of this part of the world. And perhaps catch a glimpse of the Loch Ness monster? 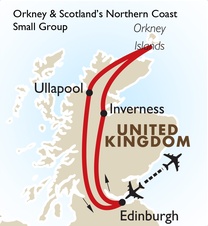 This small group experience (maximum 16 participants) gets you off the beaten track so you get a real feel for the country. Our guides are hand-picked for their pride and passion for their country. You choose your style of accommodation. Transportation is in modern Mercedes Benz mini-coaches.

Stay overnight in Edinburgh after which drive north to the Scottish Highlands passing by the historic castles of Stirling and Doune. Arrive at the town of Callander, the gateway to the Highlands for refreshments then travel past the pretty Loch Luibnaig Loch Earn and Glen Ogle. Eventually arrive at the boggy Rannoch Moor notable for its wildlife and Glencoe a scenic village in the historic glen of the same name with excellent views and an extinct volcano site. Then it’s on to Loch Ness, home of the “fictitious” Loch Ness monster. Arrive for overnight in Inverness, known as the capital of the Highlands.

The following morning, drive up the north east coast of Scotland, a region where one can spot the golden eagle and roaming red deer. Arrive at Scotland’s most northerly village, John O’Groat’s, where you will catch the ferry to the Orkney Islands arriving at its historic capital, Kirkwall, founded in 1035. The original town is one of the best preserved examples of an ancient Norse town. See the magnificent St. Magnus Cathedral considered the finest medieval building in the north of Scotland. Other sites of historical interest in the town include the Bishop’s Palace and Earl’s Palace. You will have 2 nights in Kirkwall.

The next day is spent in its entirety exploring Orkney. Start with a visit to the 5000 year old village of Skara Brae, a stone-built Neolithic settlement and a UNESCO World Heritage Site which is older than Stonehenge and the Great Pyramids. It has been called the "Scottish Pompeii" because of its excellent state of preservation. Then continue to the Ring of Brodgar, a Neolithic stone circle and again a World Heritage Site, Stenness, the UK’s oldest stone circle and Maeshowe, a site where the 12th Century Vikings left a large collection of Norse inscriptions.
The following morning, depart from Kirkwall by ferry back to the Scottish mainland. Drive through the North West Highlands through wild expanses and by colourful mountains stopping at the ruins of Ardvreck Castle dating back to 1490. Arrive for overnight in the picturesque fishing village of Ullapool nestled at the mouth of Loch Broom.

Your last day after departing from Ullapool brings you to Culloden, site of the famous Battle of Culloden in 1746 between the English and the Scottish. Then stop at Cava Cairns, a Bronze Age chamber tomb. Then after travelling through the Caledonian Pine Forest and Perthshire, arrive back at Edinburgh to complete your tour.

Jurys Inn is one of the most centrally positioned hotels in Edinburgh, located just off the famous Royal Mile on Jeffrey Street in the Old Town and surrounded by beautiful architecture. Our hotel in Edinburgh is less than a two-minute walk from Waverly Train Station and a 5-minute walk to Edinburgh Bus Station. Our prime city centre location also means that Jurys Inn guests are a short 15 minute walk from Holyrood Park, which is one of many Edinburgh gems that offers a "unique historic landscape" bursting with heritage and plenty of hills and 'crags' to explore.

Whether you're looking for hotels in Edinburgh for business at the International Conference Centre, or touring Edinburgh Castle and the sights of historic Scotland's capital, our Edinburgh hotel ensures all your destinations are within easy - and always interesting - walking distance.

Departing Edinburgh, we head west past Stirling and Doune Castles. Your first stop is in the town of Callander for refreshments before heading into the highlands for views of Loch Luibnaig, Loch Earn and Glen Ogle. Travel north over the remote Rannoch Moor into Glencoe. The stunning views of an extinct volcano are sure to amaze.

You continue up the Great Glen to the beauty of Loch Ness, travelling the whole 23 miles of the famous Loch while trying to spot Nessie. You will arrive Inverness around 6:30pm for the evening. Feel free to explore the town and have dinner at your leisure.

This morning leave Inverness and cross over the Black Isle then along the northeast coastline. Enjoy ancient landscapes and try to spot wildlife such as the Golden Eagle and Red Deer.

Head onward through John O' Groats, Scotland's most northerly mainland village. You will board a ferry into the Orkney Archipelago. From here it is a short drive to the Italian chapel and then to the Viking stronghold of Kirkwall. Kirkwall was founded in 1040 around an ancient church. At the heart of Kirkwall now is the magnificent red sandstone St Magnus Cathedral, with it's namesake, the Viking Martyr, St Magnus buried in it's walls.

Spend the day exploring Orkney's largest island, Orkney Mainland, including a visit to the 5000 year old village of Skara Brae, the mystical stone circle at Brodgar, and the standing stones at Stenness. Travel to Maeshowe where 12th century Vikings left a large collection of Norse inscriptions. Few memorial stones have been found in Orkney, possibly because of the nature of the stone. Fragments only remain of what must have been a larger number. Graffiti writing has presumably been a popular pastime for many years, but is usually regarded as a mess to be cleared up, rather than something to marvel at. The Vikings left much runic graffiti, but none have so far been as rich and interesting as in Orkahaugr - the Norse name for Maeshowe.

Return to Kirkwall in the evening.

Leave Orkney back towards mainland Scotland. Travel the old road across the top of the country, passing Ben Loyal and Ben Hope mountains. Visit the far northwest highlands and the grandeur, expanse and wilderness of the mountains of Assynt before stopping to view the 15th century ruins of Ardvreck Castle. The castle dates back to about 1490 when the lands were owned by the Macleods of Assynt. Its only place in history is an especially inglorious one.

Today the castle comprises a finger of stone, pointing accusingly at the sky. Just enough remains to identify it as once having been a three storey tower house of traditional design, including a corbelled section that once housed the main staircase and part of a vaulted basement level.

Arrive in Ullapool, a beautiful whitewashed fishing village situated at the mouth of Loch Broom.

Today, depart from Ullapool and take in the drama of River Droma. You will visit Culloden Moor, the site of The Battle of Culloden and then at Cava Cairns. Spend lunch in the ancient Caledonian Pine Forest, then head through Perthshire arriving in Edinburgh.

The tour ends at Gates J and K of Edinburgh Bus Station, St Andrew Square, EH1 3DQ around 6:30pm, and you are free to make your own arrangements from here.