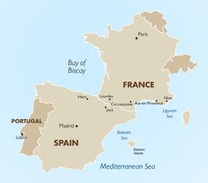 This 5-day French vacation showcases the city of Paris as well as the Palace of Versailles. It features first-class accommodations and a mix of private and small-group tours.

Your journey takes you to Paris, the City of Light and one of the most beloved cities on the planet. Staying in a first-class hotel mere steps from the Eiffel Tower, you’ll explore the city and its landmarks on a variety of tours. A private Paris tour will take you alongside symbols of the city’s architectural and artistic legacy, including Notre Dame, the Louvre, the Arc de Triomphe, and the Opera. At the end of your tour, head to the foot of the Eiffel Tower to join a cruise along the Seine to see the beautiful landmarks from the water and afterwards ride to the top of the Eiffel Tower for the best views in the city. Another day, head outside Paris to the Palace of Versailles, once the home of the Sun King Louis XIV and the symbol of France’s pre-revolutionary opulence. Tour the palace rooms and grounds, including the Hall of Mirrors and the manicured gardens. Back in Paris, join an evening tour of the Louvre to see some of the world’s greatest artistic masterworks, including the Mona Lisa and the Venus de Milo. Afterwards, head to a nearby wine bar to enjoy a tasting of several wine vintages and French cheese and charcuterie. On your final day in Paris, head to bohemian Montmartre to take in a show at the famous Moulin Rouge. Enjoy the famously risqué cabaret while sipping on champagne.

At the end of your stay, you’ll connect back to the airport to return home.

Located on the Place de la Madeleine, between the Opera and the Champs Elysées, Roblin New Hotel benefits from having a strategic location within the heart of Paris. After a total renovation entrusted to the exclusive interior designer Flamant, the hotel today offers a unique atmosphere with a subtle blend of styles inspired by famous Parisian districts. The mainreception area is now an open and inviting space that extends to a sitting room with a combination of classic and contemporary décor which includes a large fireplace.

Take a private tour of the City of Light and admire the breathtaking sites and monuments of Paris. This program is tailor-made so you can discover the main highlights of Paris including a visit to the Eiffel Tower and a Seine River Cruise.

Starting from your hotel, enjoy city tour and discover the most important monuments and symbols of Paris such as the Place Vendome, the Place de l'Opera Garnier, the Musee du Louvre, the Hotel de Ville, Notre Dame de Paris cathedral, the Pantheon, the Musee d'Orsay, the Place de la Concorde, the Champs Elysees, the Arc de Triomphe and Les Invalides. At the end of the tour, you will be dropped off at the foot of the Eiffel Tower where you can take the 1 hour Seine River cruise or join the Eiffel Tower tour (based on a pre-scheduled time). The visit to Eiffel Tower includes priority access to the 1st and 2nd floor. You will also have access to the 3rd floor, the highest floor accessible to the public. Reach the summit and discover Paris for spectacular views at a height of 276 meters. Your tour ends at the Eiffel Tower.

Guided Tour of the Louvre Museum

Your priority access ticket will allow you to follow your guide straight into the world's largest museum. No need to stand in line! This guided tour offers the perfect opportunity to learn about the museum's huge collection and its greatest works of art, such as the Mona Lisa, the Venus de Milo, and the Coronation of Napoleon.

Before it became a museum in 1793, the Louvre had long been one of the principle palaces of the Kings of France. Located right in the heart of Paris, the Louvre's galleries stretch for 786,000 square feet. It is home to the world's largest collection of art works, spanning more than 7,000 years from ancient civilizations to the 19th Century. The museum's collections are split into eight different departments: Egyptian antiquities, Greek, Etruscan &amp; Roman antiquities, Near Eastern antiquities, Islamic art, Paintings, Sculptures, Decorative Arts, and Prints &amp; Drawings.

Spend time discovering these collections with your guide, who will show you some of the museum's most famous works and tell you about the stories that lie behind them. Marvel at the Mona Lisa, painted by Leonardo da Vinci in 1506, one of the most famous female portraits in the world; the Venus de Milo, a celebrated Greek sculpture dating from 100 BC depicting the goddess Aphrodite; or the giant 33-foot-long painting of the Coronation of Napoleon, painted in 1807 by Jacques-Louis David to commemorate the crowning of Napoleon Bonaparte in Notre Dame Cathedral.

After your guided tour, spend time exploring other parts of the museum at your own pace.

Market Food Tour in the 17th

Explore one of the lesser-known areas in Paris, the 17th arrondissement. Located in the northeast of the city, this district is characterized by typical Haussmannian architecture, authentic Parisian neighborhoods and of course, a variety of markets offering local produce, goods and fine wines. On this private tour, with an expert tour guide, you will discover this neighborhood including a covered market offering the freshest food and a selection of favorite gourmet shops and products. Meet talented food artisans, taste cheeses, breads and other treats and be immersed in the Parisian local joie de vivre. Food tastings are included!

The Moulin Rouge is a cabaret in Paris, located close to Montmartre in the Pigalle district. With its trademark red windmill on its roof, it is best known for its entertaining can-can dance and dazzling, spectacular performances.

The "Feerie" show consists of a troupe of 80 artists, including 60 dancers, 1000 traditional sumptuous costumes of feathers, rhinestones and sequins, and the amazing sets in shimmering colors and performances to original music recorded by 80 musicians and 60 chorus singers.

Originally opened in 1889, the Moulin Rouge is a testament to an era that celebrated French liberation, change, artistic creation and joyful fantasy. It helped make famous the singers Mistinguett, Edith Piaf and the painter Toulouse-Lautrec. Today, it continues to inspire artists and audiences world-wide.