The Pearl of the Danube and the Iron Gates Pass: Budapest to Budapest

Cruise down the mighty Danube River to explore medieval towns and natural wonders between Budapest and the Iron Gates. As you cruise along the river, you’ll discover the diversity of Hungary, Croatia, Romania, and Serbia, explore world-class capitals, and enjoy the beauty of one of the world’s great rivers. 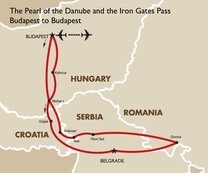 This 8-day Hungary vacation takes you along the Danube River from Budapest to some of the wonders of the Balkans, including Belgrade and the Iron Gates.

Your Danube cruise begins in Budapest, the capital of Hungary and one of the great cities of Europe. It won’t take you long to realize that Budapest is one of the most striking capitals in the world. Stroll down to the banks of the Danube to see the Hungarian Parliament Building, one of the world’s best examples of Gothic Revival architecture. Later, visit St. Stephen’s Basilica, which pays homage to the country’s first king, before hitting up the incredible food and drink scene. Once you’ve gotten a taste for Budapest, board the MS Vivaldi, which will serve as your floating hotel for the next week. With only 178 passengers on board and premium amenities in your rooms, you’ll enjoy exceptional service and an intimate environment as you travel down the Danube River.

Your first stop on your Hungary cruise is Mohacs, a historical centre that’s home to the spring-time Busojaras Festival, where men in the city don masks and scare away the spirits of winter. Continue onwards into Croatia to stop off at Osijek, a university town along the waterfront. You’ll spot the 18th-cenutry fortress towering over the city and learn about the city’s restoration after the war before passing into Serbia and the capital, Belgrade.

Belgrade is a city at cultural crossroads. As you walk through its streets, you’ll see its striking juxtaposition of Socialist architecture with art nouveau classicism, Ottoman minarets with Habsburg columns. You’ll have an afternoon to explore the city and learn about its history. Head to the intersection of the Danube and Sava rivers to enter the imposing Kalemegdan Fotress and stroll through the old city streets to see real-life examples of its cultural diversity. You’ll then continue along the Danube to the Romanian border, stopping off at the spa town of Orsova before sailing through the Iron Gates, an impressive gorge along the river. As you pass through the gates, you’ll journey along the border between Serbia and Romania and spot the Carpathian Mountains towering over you on one side with the Balkan Mountains looming over you on the other.

Continue back along the Danube in the direction of Budapest and take a land excursion to the Krusedol Monastery and the medieval city of Ilok before rejoining the ship and overnighting between Vukovar and Mohacs. Once you return to Hungary, you’ll stop off in the 2,000-year-old city of Pecs, when you can enjoy the great weather courtesy of the town’s microclimate and get a taste for the vibrant energy of the university. That afternoon, take an excursion to the Pannonian Steppe, also known as the Puszta, a massive grassland system that’ll overwhelm you with its long stretches of plain.

Close out your Hungary vacation by returning to Budapest and spending another day exploring the city. Make sure to feast on some Hungarian goulash and soak in the city’s famous natural hot springs, either Gellert Baths or Szechenyi, before your return flight home. Consider adding on a few days in Budapest to explore all the city has to offer.

Passengers are welcome to board the ship in Budapest. After comfortably settling into your cabin, enjoy a welcome cocktail with the crew before dinner. The ship will begin to cruise to Mohacs. Enjoy dinner and an evening of onboard entertainment. Cruise throughout the night.

The morning will be spent cruising. You'll then set out on an excursion to Osijek. Our ship will start sailing to Belgrade. After dinner, enjoy an evening of onboard entertainment.

Join us on an excursion to Belgrade, cradle of the Austro-Hungarian, Ottoman and Slavic cultures. Free afternoon to visit the city. Optional coach transfer (book and pay on board) to and from the town centre. Enjoy dinner and an evening of traditional Serbian entertainment on board. The ship will start sailing to Orsova.

Join on an excursion to the spa towns of Baile Herculane and Orsova. The ship will start sailing through the Iron Gates. Tonight is the festive gala evening.

You'll set out on a visit the Krusedol Monastery, as well as the small city of Sremski Karlovci.
You'll then head to Ilok on an excursion to visit the medieval city and taste some local products. When the tour is finished, you'll return to the ship in Vukovar. After dinner, enjoy an evening of onboard entertainment. The ship will start sailing to Mohacs throughout the night.

Early morning arrival and tour of Budapest. The afternoon will be free or dedicated to an excursion to Godollo Palace. Tonight, join on a tour of Budapest by night. The ship will remain in port overnight.

Enjoy breakfast on board before disembarking at 9 a.m.