Discover the romance of Old World Europe on this river cruise from Munich to Budapest. Unlock the beauty of Austria’s Lake District, tour the historical centres of Salzburg and Vienna, enjoy the charms of little-seen Bratislava in Slovakia, and end your tour exploring the imperial landmarks of Budapest. 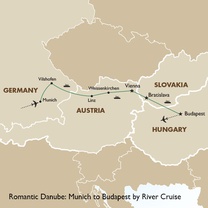 This 11-day European river cruise takes you along the Danube from Munich to Vienna and Budapest. It features deluxe accommodations, shared tours, and is a great way to explore several Central European cities on one convenient itinerary.

Your journey begins in Munich, one of Germany’s largest cities and the centre of Bavaria. You’ll have one night in Munich to explore the lovely old town with its wooden-trimmed buildings and see the Old and New City Halls of Marienplatz. The next day, you’ll board the AmaSonata and begin your journey down the Danube. The AmaSonata is a 5-star river vessel that provides comfortable accommodations, most with twin balconies. Relax on the sun deck, enjoy cocktails in the main lounge, and dine on multi-course 5-star cuisine in the Chef’s Table restaurant. First stop on your Danube cruise is Vilshofen, where you’ll see the Baroque tower in the centre of town, before you continue on to Passau, the City of Three Rivers. Hike up to the Veste Oberhaus, a massive fortress that overlooks the city, or head on a bike ride along the riverside.

Pass into Austria and spend a full day in Salzburg, the birthplace of Mozart and one of the world’s foremost musical centres. On your tour, you’ll visit Mirabell Palace, with its opulent gardens, Residenzplatz, the central square, and the old shopping streets. Alternatively, you can tour the city of Linz and visit nearby Cesky Krumlov over the Czech border. Continue along the river and pass through the Strudengau and Wachau Valleys on route to Weissenkirchen, the gateway to Durnstein. You can head on a walking tour of Durnstein to see the Baroque Stiftskirche and visit the Benedictine Abbey of nearby Melk. If you’re feeling active, instead visit the hillside fortress where Richard the Lionheart was held captive during the Middle Ages. That evening, enjoy a wine tasting in Weissenkirchen, trying local vintages of Riesling and Gruner Veltiner.

Reach Vienna, the capital of Austria, and spend a day exploring the treasures of the Austro-Hungarian Empire. You’ll visit the famous Opera House and the former Imperial Palace, and have the chance to go on a bike ride throughout the city. In the afternoon, visit the sites you missed in the morning, paying particular attention to the wealth of good art museums. Connect into nearby Slovakia and reach Bratislava, where 11 of the kings and queens of the Austro-Hungarian Empire were crowned. Head on a walking tour of this small, but lovely capital, either focusing on Slovakian specialties on a food tour or heading up to Bratislava Castle for views over the river.

The final stop on your Danube cruise is Budapest, the capital of Hungary and former co-capital of the Austro-Hungarian Empire. Head on a quick city tour that takes in the Great Market Hall and the centerpieces of both Buda and Pest, including the Chain Bridge that connects the two. You’ll then disembark and spend a couple more nights in Budapest in the centre of Pest, conveniently located near the National Museum and the trendy Jewish Quarter. While in Budapest, you’ll head on a grand city tour by bus, passing by Heroes’ Square, the Royal Palace, and the stunning Hungarian Parliament Building, the largest in Europe. You’ll also have a chance to see Fisherman’s Bastion and visit Gellert Hill in Buda.

At the end of your stay, connect to the airport to return back home.

Established in 1490, the Hotel Torbraeu is situated in the heart of Munich. All the main attractions of Munich are within a short walking distance, such as St. Peter's Church, the 15th century Frauenkirche Cathedral and Hofbrauhaus (the world-famous Beer Hall). It is also easy to reach Isator S-Bahn (metro station), which is only 100m away from the hotel. Also nearby are Marienplatz, Viktualienmarkt. and New Town Hall - Glockenspiel. This smoke-free hotel features a restaurant, a bar/lounge, and a coffee shop/cafe. Wi-Fi in public areas is free.

Embark your cruise in Vilshofen. This evening meet your fellow passengers on board

Explore Vilshofen's beautiful old town before cruising to Passau, known as the "City of Three Rivers." Join a walking tour or if you prefer to be more active, hike high into the hills for a visit to the "Veste Oberhaus," Passau's Castle Hill; or go on a Danube bike tour.

Opt for a full-day excursion to Salzburg where you'll tour the historic center, Mirabell Gardens, Residenz Square and the Old Market. Stop at Mondsee's Basilica St. Michael, the site of the wedding scene in The Sound of Music. Alternatively, join a morning walking tour through Linz's old city center and by the Mozart House; or bike along the city's famed "Culture Mile" and the Danube.

Cruise through the Strudengau and Wachau valleys to Weissenkirchen, gateway to Durnstein. Once here, you can choose to join a walking tour in Durnstein along its cobblestone streets to the Baroque Stiftskirche, and then visit Melk's magnificent Benedictine Abbey. For the more active adventurer, you can opt to hike up to the fortress where Richard the Lionheart was once held, or take a bike ride along the Danube through the Wachau Valley. As an alternative excursion, visit a local apricot grower, where you'll enjoy the region's finest apricot treats.

Later in the evening, enjoy a special wine tasting of locally grown, world-renowned Riesling and Gruner Veltliner in Weissenkirchen.

The "City of Waltzes" offers a treasure trove of gems and your city tour showcases them, including the majestic Opera House and the former Imperial Palace. Your tour concludes in the historic city center with a visit to St. Stephen's Cathedral. Or if you prefer a more active tour, take a guided bike ride through Vienna.

During the afternoon, enjoy leisure time to further explore this iconic city.

Host to the crowning ceremonies of 11 Hungarian kings and queens between 1536 and 1830, Bratislava certainly has earned the title "Coronation City of Kings," as you'll discover during your walking tour. Or join a special "Tastes of Slovakia" tour. For a more active adventure, hike up to Bratislava Castle, offering magnificent views of the city.

Your city tour begins at Budapest's Great Market Hall, where you'll discover plenty of delicious food and shopping. Afterwards, you'll visit both the Buda (hilly) and Pest (flat) sides of the Danube River. You'll see the 19th-century Chain Bridge, which connects the Buda district with Pest; and the UNESCO-designated Castle Hill district, which contains some of Budapest's most important medieval monuments and museums. As an alternative choice, you can hike up to Castle Hill for breathtaking views of the city below.

Disembark the ship as you prepare for your flight home.

Budapest Port/Pier to Hotel in Budapest

The property is centrally located, close to the National Museum, Vaci Street, St. Steven's Basilica and the Jewish Synagogue.

We are prepared to show You the Hungarian capital in 4 hours so get ready to engaged by this city. The Heroes Square, the State Opera House, the Hungarian Parliament, the Royal Palace and the Citadel (photostop) cannot wait for You to see them. During the Grand City Tour we will take You for an additional walk in the Castle District to enjoy its unique medieval atmosphere and get carried away in history. Sights include: Parliament, Margaret-Bridge (Margaret-Island), Royal Castle on the Buda side, Fishermen's Bastion (Castle Walk), Matthias Church, Gellert Hill (Photostop), Heroes' Square, Opera and St. Stephen's Basilica.