DELUXE | PRIVATE-GUIDED: Take an intimate journey into Rome to discover the heart of the city and its fascinating history. Visit beloved landmarks on a private walking tour, admire the Sistine Chapel and the Vatican Museums before the crowds arrive, and explore the restricted underground dungeons of the Colosseum. 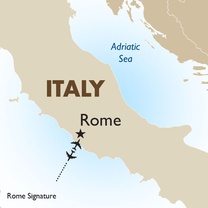 This 4-day Italian vacation showcases all that the Eternal City has to offer. It features deluxe accommodations and a mix of private and small group tours.

Your Italian journey takes you to Rome, the Italian capital and one-time centre of the ancient world. Staying in the deluxe accommodations of The Inn at the Roman Forum, an upscale hotel located on ancient ruins, you’ll explore the city on a variety of tours that’ll showcase its historical and religious significance. A private three-hour walking tour will showcase some of the most popular sites and give you invaluable insight into their history. You’ll venture to the Spanish Steps, the Trevi Fountain, the Piazza Colonna, and the Pantheon. The next day, get up early to see the Vatican Museums before the crowds arrive. Head straight to the Sistine Chapel, where you’ll be able to enjoy Michelangelo’s gorgeous frescoes without the crowds. Then continue through the rest of the museums to see other masterpieces, such as Raphael’s frescoes. Cap off the tour with a visit to St. Peter’s Basilica, the world’s largest church and the resting place of the bones of St. Peter. That afternoon, continue the journey through ancient history with a trip to the Colosseum, where you’ll enjoy restricted access into the dungeons and fighting deck of this ancient stadium. Afterwards, explore Palatine Hill, where the political elite of Rome lived, before ending the tour at the Roman Forum, the centre of economic and philosophical life in the empire.

At the end of your tour, you’ll head to the airport to connect to your next destination. Consider extending your stay in Italy by combining this trip with visits to other cities.

The Inn at the Roman Forum

The Inn At The Roman Forum is a 5-star deluxe property situated in a wonderful position to discover the historical Rome of the ancient splendor, boutiques, and shopping. A 7-minute walk from a metro station, this upscale hotel with Roman ruins and an annex is also an 11-minute walk from the Colosseum. The Rooftop Lounge is the perfect place to relax and enjoy something to drink after a long day spent in the city. This is also where the complimentary breakfast is served.

Take an exclusive 3-hour private walking tour of Italy's capital city, Rome. This tour includes a visit to some of the most famous squares in the centre of the city such as the Spanish Square and its famous Spanish steps, Trevi Fountain, Piazza Colonna, the Pantheon and Navona Square. Unless closed for religious ceremonies, a visit to some of Rome's traditional Catholic churches may be included in the walking tour, for example, the Church of St. Ignatius or the Church of St. Louis.

Take a tour of the Vatican and the Sistine Chapel with privileged entrance. On this exclusive small group tour, get an early start to discover the very best of Vatican City by entering the Vatican Museums one entire hour before the general public. Take in the majesty of Michelangelo's Sistine Chapel in total peace before the crowds start pouring in and admire the Vatican's many treasures with your local guide as you walk through this 9-mile long museum so you get to see the highlights and recommend rooms and collections. Your tour begins at 7:30AM near the Vatican Museums entrance where you will meet your expert tour guide who will let you into the museums one hour before they officially open and you will be immediately guided through the empty Vatican Museum hallways straight to the first stop -- Michelangelo's Sistine Chapel. Since this chapel is the number one attraction in the Vatican, you'll get a rare opportunity to admire Michelangelo's ceiling frescoes and Last Judgment without having to deal with crowds of tourists. You will then walk up the stairs to the amazing galleries, from the Candelabra, to the Tapestries up to the world-known Gallery of Maps, the Renaissance version of Google Maps. A Vatican Tour cannot be complete without the Raphael Rooms of the apartments of Pope Julius II. Once you're done in the Raphael Rooms, your guide will take you through the Sistine Chapel one more time before heading into Saint Peter's Basilica. Admire the spaciousness of this basilica, which is the largest Catholic church in the entire world. A few of the glorious works of art you will get to see up close include Michelangelo's Pietà and Bernini's Baldacchino Altar. Before you leave St. Peter's Basilica, your guide will tell you about the Papal Tombs, the Memorial of Pope Alexander VII, and tell you how to climb up to the top of the Dome. Conclude your Vatican tour by walking around Bernini's celebrated Piazza San Pietro Square.

On this small group VIP tour, you will access two restricted areas of the Colosseum which include the Colosseum underground and Colosseum arena floor. These exclusive areas are rarely visited due to ticket availablity. Vistors will see a 360-degree overview of the Amphitheater Flavius, with privileged access into the areas where fighters and beasts awaited their fate and the ability of walking where the infamous games were held, and a final climb to the nose-bleeding seats. Once inside the Colosseum, you will first be directed to the entrance of the Colosseum arena with your tour guide immediately introducing you to the wonders of the Ancient Roman games. Then, walk through the archway and walk onto the light yellow colored arena, where you will get a feel for what it was like to hear the roar of 70,000 spectators chanting your name. You will descend into the Colosseum dungeons, learn about the complex labyrinth that lived under the arena floor, filled with cages, mechanical elevators, rooms and prisons. Here is where the gory tales you only read about come to life. Once you have finished your tour inside the Colosseum, your guide will lead you to another Roman icon -- the Palatine Hill. This was once an exclusive neighborhood which was home to political figures who were the backbone of the Roman Empire. This hilltop neighborhood embodied the top of Rome's social order at a time when Rome ruled the world. You will see it all come full-circle once you descend into the grand Roman Forum, the public center of Roman political life. Just a few of the inspiring structures your tour guide will take you to, include Julius Caesar's Temple, the Temple of Antonio &amp; Faustina, and the Basilica of Maxentius and many more.

Daily, except Mondays and Fridays:  April to October