Explore the Renaissance capitals of central Italy. Ride a gondola down the Grand Canal of Venice, admire Michelangelo’s David at the Galleria dell’Accademia in Florence and walk the terraced cliffs of the Cinque Terre. 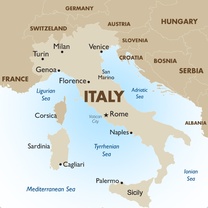 This 10-day tour combines the famous bustle of Venice and Rome with the smaller historical sites of Siena and the villages of the Cinque Terre.

Built on a lagoon of 117 small islands in the Adriatic Sea, Venice used to be one of the world capitals of commerce and culture. Today, it remains one of Europe’s most cherished destinations. The city is a Renaissance masterpiece with winding streets, massive piazzas and stunning canals. Hire a gondola and cruise down the Grand Canal. In St. Mark’s Square you can see the Basilica, as well as Doge’s Palace and the clock tower of Torre dell’Orologio. If you can, attend a concert by the Venice Baroque Orchestra and hear music of famous Venetian Antonio Vivaldi. When the sun sets, visit a canal-side restaurant, order a Spritz Veneziano (prosecco, Campari and sparkling water) and enjoy the fresh seafood the city is known for.

While Venice was one of the capitals of the Renaissance, Florence was its birthplace. It’s the capital of Tuscany and a treasure trove of art. The Uffizi Gallery houses Sandro Botticelli’s “The Birth of Venus” and Leonardo da Vinci’s “The Annunciation.” Gaze upon Michelangelo’s “David” at the Galleria dell’Accademia. No trip to Florence is complete without trying some of the local cuisine. A smart lunch is panzanella, a salad consisting of ripe tomatoes, onions and crusty bread covered in vinegar, extra virgin olive oil and basil.

An architectural blunder in its own time, the Leaning Tower of Pisa is now one of the most beloved buildings on the planet. Pisa boasts more than the Leaning Tower. It’s a bustling university town full of Romanesque and Gothic architecture. Nearby Lucca is the birthplace of opera composer, Giacomo Puccini. Be sure to walk the fortified walls that surround the city centre.

The fishing villages of Monterosso, Riomaggiore, Vernazza, Corniglia and Manarola make up the Cinque Terre or the Five Lands. Dating back to the seventh century, these rugged villages are pastel-coloured remnants of Italy’s past. They are among the western coast’s loveliest sites. Cars are banned here so be prepared to hike through the numerous terraces that wind across the cliffs.

San Gimignano is a medieval hill town located to the south of Cinque Terre in the heart of Tuscany. The town is most famous for the many towers that rival families constructed during the Middle Ages. It’s also close to many wineries, where you can try the region’s white wines made from Vernaccia grapes. Just southeast of San Gimignano is Siena, which is a preserved glimpse of Italy as it was right before the Renaissance. Siena is full of gorgeous Gothic architecture and is home to the Palio, a famous horse race held twice a year. Visit the Siena Cathedral to see how the basilica was originally intended to be the largest in the world. Also be sure to see the statue of the Capitoline Wolf, which was brought to Siena by the sons of Rome’s founder, Remus.

End your tour of Italy’s secrets with Rome, the country’s capital and heart of the ancient Roman Empire. Rome never ceases to dazzle even the most experienced Globetrotter. Visit the Spanish Steps and gaze up at the window where John Keats spent the last months of his life. Enter St. Peter’s Basilica at the Vatican City and marvel at Michelangelo’s masterpieces within the Sistine Chapel. Walk the stones of the Roman Forum and the Colosseum and stand in awe of the empire that thrived there. And don’t forget to sample Roman cuisine. This trip to Italy offers a sample of the country’s wealth of food, wine and art.

Arrive in style! Your airport arrival transfer is by private water taxi. Glide into the centre of Venice by boat to gain an appropriate sense of perspective of this unique city from the water... don't forget to keep your camera handy! After tonight's group meeting enjoy dinner with your fellow travellers at a local restaurant. If you arrive early today, get out and experience the winding canals and streets of beautiful Venice. This city is best explored on foot or by boat

Today you will take an orientation walk in the morning. Board a vaporetto (water bus) to the island of San Giorgio, where you will climb the bell tower and witness expansive views of Venice. Enjoy free time in the afternoon. You might like to visit some museums or take a trip to some of the outlying islands. The Grand Canal, the quaint shopfronts that line the Rialto Bridge and the Piazza and Basilica di San Marco are all worthy sights to visit. It's equally satisfying to simply meander around the tiny cobbled streets and discover the beautiful markets, cafes, galleries and churches. A Venetian gondola ride down the canals is a must, as is a taste of the region's speciality dessert, tiramisu.

Travel by train to Florence. Florence is one of the most culturally rich and beautiful cities in Italy, known to many as the beating heart of Tuscany. The Medicis, Leonardo da Vinci, Raphael, Brunelleschi, Machiavelli, Donatello and Michelangelo all lived in Florence at the height of their creative reign. Walk to Piazzale Michelangelo to take in beautiful views of the city is a lovely way to while away the day. Sample some of the culinary delicacies on offer from across Tuscany. Regional dishes are renowned for their simplicity and ingredient-driven quality. Olive oil, beans and fresh herbs are a feature here. Two standout dishes of the region are bistecca alla fiorentina (essentially a big T-bone steak that is shared between multiple diners) and ribollita (a simple, hearty soup of bread, vegetables and beans). Panforte is the signature sweet treat.

While you are in Florence, there will be plenty of time to explore the city and its museums and galleries. It's impossible to see everything in this Renaissance wonderland, however, so take your time and enjoy it. Visiting the Uffizi while you are here is highly recommended -- it is one of the oldest galleries in the world, and a building of great beauty. Similarly, a visit to Galleria dell'Accademia, where you can see Michelangelo's famous statue of David, is a must.

This morning you will make your way towards the dramatic coast of the Cinque Terre, and visit Pisa and Lucca on the way. Due to the precarious state of the Leaning Tower of Pisa, the Torre Pendente, it is not always possible to climb it, but you will definitely have the opportunity to photograph it from the ground. Your trip leader will take you to the ticket office to purchase tickets to the Cathedral, Baptistry, Museums and Campo Santo, should you wish to visit them. Your next stop is Lucca, where you can walk the bustling streets or perhaps take a walk along the famous city walls. You then continue to your accommodation in La Spezia. This is the gateway to the gorgeous Cinque Terre.

Cinque Terre (translating as 'Five Lands' or 'Five Villages') is a region of Italy famed for its rugged coastline and the colourful villages that cling to it. The footpaths that run between the villages were once the only way to travel in the region. You can choose to walk just a few sections, which will still unveil a great amount of majestic scenery. There is a train that connects the villages as well, so if you prefer to enjoy a more relaxing day, you are welcome to take this option. Join a local shop-keeper for a Pesto making class in Levanto. Make your own pesto and enjoy it with a glass of wine afterwards. In the evening there's no better way to refuel after the taxing walks than indulging in a delicious Mediterranean feast. Be sure to try the local pesto and focaccia, both specialties of the area.

This morning you will start to make your way to your next hotel (the feature stay of this trip) in the Chianti Region, right in the heart of Tuscany. On the way, you will visit San Gimignano, the 'Town of Fine Towers'. This medieval walled town is famous for its well-preserved tower houses which are now on the UNESCO World Heritage list. There will be time for you to explore the old town centre and its fine Gothic and Romanesque architecture. This region is renowned for its ancient Vernaccia grapes, which are the basis for one of Tuscany's finest white wines. Relax in a local family's garden surrounded by olive trees and vineyards and enjoy the local organic wine varieties produced by this family for centuries. Arrive at your hotel (a converted medieval monastery) in the afternoon. Relax by the pool or perhaps take a stroll through the vineyards that are part of the property.

Begin the day with a short drive to Monteriggioni, another Tuscan hill town that was built by the Sienese to defend their territory against the Florentines in the 13th century. Learn a little more about the circular walls and 14 towers which played a significant role in the attacks staged by the Bishop of Volterra. Continue to the medieval city of Siena. It is best known for the Piazza del Campo, the site of the twice-annual Palio (a horse race that goes around the edge of the oval square). Be sure to visit the small but stunning Siena Cathedral, and see the statue of the capitoline wolf which was brought here by the sons of Remus, the founder of Rome. It has been the city's symbol ever since. After a 4 hour drive you will arrive into Rome in the early evening.

From incredible ancient monuments to glamourous restaurants and boutiques, Rome is a city of great beauty and diversity. Today you will be taken on a walking tour of the city. You'll see such marvels as the Roman Forum, the Victor Emmanuel Monument, the Pantheon, the Colosseum, Trevi Fountain, Piazza Navona and Venezia, the Spanish Steps and Via Dei Condotti. As you wander the city, perhaps stop in at a bar for a quick coffee, or indulge in some gelato. The rest of the day is free for you to explore this great city as you please. Make sure you take the opportunity to visit the majestic Vatican City and St Peter's Basilica. The view from the dome of St Peter's is breath taking. Roman food is world-renowned, and the trattorias that line the streets are the perfect place to sample the local pasta delights. A taste or two of the (very well priced) local wine is also a must. Enjoy a farewell dinner with your travel companions to end the trip.

Your trip comes to an end after breakfast.