Walking in Italy: The Amalfi Coast

Explore the Amalfi Coast on a southern Italy tour that combines the region’s fascinating history with the very best in culture, natural beauty, and food. You’ll even sail across to the Isle of Capri. 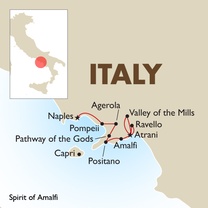 This 8-day Italy trip departs Naples, taking you through the beauty, history, and flavours of the Amalfi Coast.

Naples is a gritty city with something of a rough reputation, but those who love it really love it, including actress Sophia Loren, who lived in the region for many years. You’ll enjoy a guided walk through the historic centre, before perhaps trying the most authentic pizza you’ll ever eat. Then dive into the tragic history of nearby Pompeii, exploring the ruins in the shadow of Vesuvius. Finally, take in the view from Agerola high plain before enjoying a local dinner.

The view from Punto Panoramico extends all the way to the Isle of Capri, making it an ideal first stop on a walking tour that explores the geology and agriculture of the area. Roam through Mediterranean vineyards, small villages, and ancient ruins as you explore the hills (stopping for limoncello at a local distillery, of course!). The following day takes you further afield on a bus tour before following the Footpath of the Gods to Positano and picturesque Nocelle. Your hotel for the next few nights is in Atrani, one of the more authentic and less touristy-heavy villages in the region.

French novelist Andrew Gide described the village of Ravello as being ‘closer to the sky than the seashore,’ but you can decide for yourself as you spend a day exploring its 11th century villas. Then it’s time for your visit to Capri, an island that has enchanted Roman emperors, commoners, and everyone in between. Let the island’s mythology sink in as you approach the majestic cliffs, then spend the day exploring sights such as the former villa of Emperor Tiberius, an historic monastery, and the narrow alleys of Capri’s namesake village.

Your last day of walking takes in some spectacular sights including the Valley of the Dragon, and the ruins of Torre dello Zirro. Refresh with a drink in Pontone, before wandering the remains of Europe’s first paper mills and watching local, day to day life go by. Your final afternoon is at leisure to enjoy the beach, pick up some souvenirs, or return to any sights you might have missed. A farewell dinner provides one last memory of your time on the Amalfi before you depart.

Arrive in Naples, the capital of the region of Campania. Tonight's group meeting is followed by a group dinner - your first chance to savour the region's specialties. If you arrive early, use your free time during the day to discover some of Naples' impressive architecture and grandiose monuments, many of which date back to the Spanish rule of the 16th and 17th centuries.

After a leisurely breakfast, embark on a walking tour of the old town. You'll see the wonderful historic center of Naples, a major European cultural capital since the time of the Greeks. Perhaps seek out an authentic Neapolitan pizza for lunch, then enjoy a short local train ride to the Pompeii archeological site. Here, without question, lie some of the world's most fascinating and preeminent ruins. Finely preserved, they give you an extraordinarily real image of daily life in a Roman city with villas, temples, theatres and bustling markets. Walk along the chariot-marked streets that were nestled under the shadow of Vesuvius until the fatal eruption in 79 AD. Visit the magnificent amphitheater and the 'Villa of Mysteries.' You will also visit the Roman Forum and basilica, temples, public baths, and the tiny Odeon created for music recitals. Enjoy a short stroll and perhaps have a drink on the central square. Here your private minibus will pick you up for a scenic drive (approximately 1 hour) to the Agerola high plain. Along the way, you'll be dazzled by views of the Amalfi Coast. Enjoy dinner in your family-run hotel in Agerola this evening.

After breakfast, embark on your first real day of walking. Most of the walk today is downhill. Your first stop will be the 'Punto Panoramico,' perhaps the most scenic viewpoint on the whole Amalfi Coast. From here you will descend through a spectacular landscape, affording you gorgeous views along the coastline. You will be able to see across to the Isle of Capri, and south to the densely forested and expansive Cilento National Park. Today also offers an insight into the geology and agriculture of the area. Your path leads you through an archetypal Mediterranean landscape with vineyards, chestnut trees, oaks and pretty sections of shrubs and flowers. You will spot many old ruins speckling the hillsides. In spring, you can smell the Italian herbs. The path then leads you through the small village of Furore, from where you can see its lovely 'fjord.' You'll walk up towards grottoes in the cliffside and back up towards Bomerano for lunch. Visit a local artisan at his small liqueur factory in Bomerano. Learn some of the science behind how to make limoncello, understand why the area is famed for the production of the liqueur and sample a drop too. Return to your hotel by local bus.

Pathway of the Gods - Positano - Amalfi

This morning you will take a local bus for a short ride back to the quiet mountain village of Bomerano (where you ended your walk yesterday). Perhaps enjoy a coffee before embarking on the famous Sentiero degli Dei (Pathway of the Gods) to Positano. This path winds its way through unique scenery and boasts unrivalled views along the coast. Walk through forests and fields of wildflowers, past ancient stone huts and beside sheer walls of granite. Glimpse local farmers tending their crops by hoe and elbow grease, herds of goats feeding beside the trail beside their shepherds, and teams of workmen commuting by mule. Taste delicious Agerola cheese on the way as a shepherd (and his goats!) will join you to reveal the process of cheese making. By late morning you will reach Vallone di Grarelle, then continue to the hamlet of Nocelle, a picturesque village situated above Positano. A walk through the village leads to what's known as the Montepertuso Crossing - a deep gorge with limestone walls. From Montepertuso it's just a short walk down the old steps, through olive groves and vineyards, to beautiful Positano (though you can take a bus instead if you like). Take your time to explore Positano, then continue to Amalfi by boat. Settle into your feature stay hotel in the centre of Amalfi, with your main luggage already waiting for you.

Special Information:
Walking time: approximately 5 hours (7 km). Your luggage will be transferred for you between Agerola and Amalfi, so all you need to take with you today is your day pack.

Amalfi is a beautifully preserved town on the coast of the same name, with narrow little streets and a serene town square. From your hotel, you will follow the Valley of the Dragon up to Ravello - another highlight of the coast. The French novelist André Gide once described this town as being 'closer to the sky than the seashore'. For centuries, its lofty position and sunny, dry climate have made it an appealing place for writers, artists, musicians and travellers. Ravello also boasts two magnificent villas - the superb 11th Century Villa Rufolo which was once a papal residence and later the home of Wagner, and Villa Cimbrone, a magnificent 19th Century mansion with fabulous gardens and unrivalled views over the Gulf of Salerno. Retrace your steps along a rather steep mule track down again to beautiful Atrani and then back to Amalfi. Sweeping panoramas will reward your efforts.

Today is dedicated to the rightly famous Isle of Capri, a place where Roman emperors used to come as tourists. You will sail from Amalfi to Capri by boat, following the beautiful coastline and passing the islands of the mythical sirens that were mentioned in Homer's Iliad and Odyssey. As you approach, witness Capri's coastline in all its glory: mighty cliffs, shard-like rock formations, crashing blue seas. Have your camera at the ready on this short cruise. When you arrive in Capri, you will see the popular sights, then take a beautiful circuit walk. During this walk you will pass Villa Jovis (the ruins of the most impressive Roman villa on the island, once home to Emperor Tiberius), see a historic monastery and explore the winding alleyways of the village of Capri. Part of your walk follows the untouched coastline and passes many impressive grottoes, and there's time to dip your feet in the water. Your walk can be extended or shortened in many ways today, depending on the wishes of the group. Late in the afternoon, you will travel by boat back to Amalfi.

Get ready for a magical day of walking. Start in the quiet backstreets of Amalfi, heading up to the village of Pontone. Walk on the narrow ridge and then beneath shady pine trees and through fields of wildflowers. This brings you to a viewpoint from which you can see across the Valle del Dragone (Valley of the Dragon) and the luxurious gardens and villas of Ravello. A series of ups and downs takes you to the ruins of the famous watchtower (Torre dello Zirro). After retracing your steps to pretty Pontone, you can enjoy a drink under the shade of lemon trees and gaze down upon the town of Amalfi. Then walk down into the shaded Valle dei Mulini (Valley of the Watermills). Here you will find remnants of Europe's earliest paper mills, strewn among thick foliage fed by the valley's streams. You may pass locals collecting wild mushrooms and stout men carrying half their body weight in lemons on their heads. The path takes you deep into the valley and the entrance of the nature reserve 'Valle delle Ferriere'. This is one of the most interesting nature reserves of the area and an ideal place for lunch. From here it's an hour back down to Amalfi, past the Museo della Carta (paper museum). The rest of the day will be at your leisure. Enjoy the beach, do some shopping or take a dip in the Mediterranean. Tonight you will gather for a special farewell dinner.

Your journey comes to an end this morning after breakfast in Amalfi. From here it is easy to arrange onward connections. There are local SITA buses that run to Sorrento, Salerno or Naples for onward travel by rail. You may even wish to take a ferry to Salerno or Naples.