The Splendours of Sicily

One week in Sicily reavels a wealth of attractions to entice the visitor. Corleone of “Godfather” fame, a medieval village, a nature reserve, local wine tasting, Greek and Roman historical sites, an active volcano and colourful resorts plus much more. 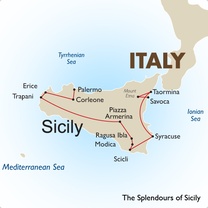 Sicily is the largest island in the Mediterranean and abounds in natural beauty and ancient history. It is rich in culture, archaeological discoveries and is known for its outstanding gastronomy,

Begin your tour in Palermo, the capital city of Sicily, renowned for being featured extensively in the movie “The Godfather”. Travel today to Corleone, a small town associated with the Italian Mafia. You will meet the son of a Corleone couple who will explain the origins and transformations of the Mafia. Return for overnight in Palermo.

The next morning, depart for the medieval village of Erice reached by cable car. Enjoy not only the old town but the panoramic views of the surrounding countryside. Erice dates back to the days of the original settlers in Sicily from as far back as the Iron Age. Then continue to medieval Trapani and visit a nature reserve situated in a wetland with over 170 species of birds including flamingos.  Then it’s on to Marsala, home of the famous fortified wine. You will have the opportunity to enjoy samples. Finally today, spend overnight in the Valley of Temples Archaeological Park in Agrigento.

The next morning, you will explore the valley, a UNESCO World Heritage Site with its 8 temples dating back to 510 BC. Next travel to Piazza Amerina, a charming town with one of the largest surviving Roman dwellings, the Villa Romana del Casale. Eventually reach your hotel in Ragusa Ibia, a charming converted monastery where you will spend the next 2 nights.

The following day brings you to Modica, known as the capital of baroque Sicilian art. Enjoy a walk around the old town with its splendid cathedral. Continue to quaint Scicili used often as a movie site. Return to Ragusa Ibia where the remainder of the day is at leisure.

The ancient city of Syracuse is next. Situated on the sea, it contains many archaeological treasures dating back to the Ancient Greek occupation. Nearby is the island of Ortiga also rich in archaeological sites including the 6th Century BC Temple of Apollo. Continue to Taormina, a pretty hill town perched on top of high cliffs where you will spend the next 2 nights.

Today you will enjoy a visit to the dramatic Mount Etna, the slumbering active volcano.  Later spend the afternoon at leisure in Taormina.

On your final day in Sicily, you will visit Savoca, a village which was featured in many scenes in “the Godfather”. Return to Taormina where your tour comes to an end.

The Principe di Villafranca is an elegant 4-star boutique hotel. With only 32 unique rooms, the hotel resembles a historic house, featuring living areas on the ground floor, bright natural light and contemporary art and furnishings throughout. It is located on a quiet street, steps away from the main boulevard, via della Liberta where you can find fashion and furniture design stores mixed with bookshops and many shops offering products from the local food and wine industry. The hotel offers complimentary Wifi, breakfast room, lounge bar, fireplace room, fitness room and a curated art collection for the promotion of contemporary art.

Today, we'll meet in Sicily's capital, Palermo, and dive straight into its streets for a Mafia-themed tour.

Then, it's onwards to Monreale. We'll pay a visit to the impressive cathedral before moving on to our idyllic farm stay in Selinunte - where a welcome dinner awaits us.

This morning, we're in for a culinary treat. Prepare to sample some of the farm's tasty olives, award-winning olive oil, fresh breads and more!

Then, en route to Favara, we'll stop by the historic fishing port of Sciacca. Back in the times of Ancient Greece, its natural thermal springs were a great attraction - and we'll have plenty of time to explore them before we move on to our hotel.

After breakfast we'll visit the UNESCO World Heritage-listed Valley of Temples - where a local guide will reveal the history of the archaeological site.

En route to Ragusa, we'll make a stop at Villa Romana del Casale, which contains one of the largest collections of Roman mosaics in the world.

We'll start our day in indulgent style with a chocolate tasting session in Modica. And then? The gastronomic theme will continue as we come together for a ricotta tasting session and included lunch in Sant'Angelo Muxaro. Appetites satisfied, we'll return to Ragusa - where we'll have the rest of the day to wander the town at our leisure.

On today's agenda: A visit to the city of Noto, where we'll learn more about almond cultivation with a local expert. After an included lunch at a local restaurant, we'll press on to lovely Syracuse - where we'll take some time to orient ourselves on a walking tour.

Seaside Syracuse - which rivalled Athens as the most important city of ancient Greece - is yours for the taking today. We recommend taking some time to wander the temples and sacred caves before losing yourself in the city's winding streets - which open out on baroque piazzas, bustling markets and beautiful sea views.

Today, we head towards Mt. Etna, a slumbering giant that towers over the surrounding landscape, with the option to take a closer look at its smouldering craters. Then: we'll move on to a local farm for lunch (complete with wine tasting) before journeying onwards to Carruba, where we'll spend the next two nights.

We'll make a pit stop in the town of Savoca (where The Godfather was famously filmed) before moving on to Taormina for a walking tour.

After a day spent exploring, tonight's farewell dinner will be well-deserved

Today, our tour will end in Catania - but not before a walking tour of the ancient port city. With an included visit to a local market, you can stock up on foodie souvenirs to take home (including favourites such as olives, biscotti, cheese and wine). We'll even pass by Catania's oldest cannolo shop, where we'll have the chance to fill our own cannoli with ricotta cheese. What a way to round off the trip!

Romano House is the new luxury residence by the Romano Collection brand. This luxury 4 star Catania hotel, in the heart of this wonderful, baroque city, is a harmonious cross between historical 17th century architecture and the most contemporary and exclusive design.

50 rooms and luxury suites with prized furnishings and an international style, including skilfully restored frescoes, candid stuccoes and baroque friezes, matched with Philippe Starck furnishings and the most modern technologies: full HD plasma screens, motorised shading curtains which can be comfortably controlled from the bed, warm and all-encompassing led lighting, fast and secure wireless internet connection, a notebook available for clients and much more. Every last detail of the rooms at this luxury hotel in Catania, Romano House, has been studied and selected with the intention of ensuring the well-being of guests.

Mobility:
The tour involves walking and requires guests to board and disembark our vehicles several times a day making this tour unsuitable for those with reduced mobility.