DELUXE | PRIVATE-GUIDED: Explore one of the finest cities in the Baltics on this escape to Tallinn. Spread across four nights, you’ll stay in the finest accommodations in the city, explore the Old Town and the local culinary scene, and enjoy private-guided excursions to Kadriorg Palace and Lahemaa National Park. 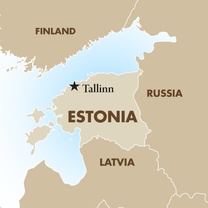 This 5-day Estonian vacation takes you to the capital, Tallinn, as well as to surrounding landmarks such as Kadriorg Palace and Lahemaa National Park. It features deluxe accommodations and private tours.

Your journey through Estonia takes you to Tallinn, the capital and home to one of the best-preserved Old Towns in Europe. Explore the charming architecture and lively streets on a walking tour that takes you from the castles and cathedrals of the Upper Town, including Toompea Castle and the Cathedral of Alexander Nevsky, to the Lower Town, where you’ll see the reconstructed Holy Ghost Church and the open artisan studios of Katariina Gild Street. The next day, tour the opulent Baroque mansion of Kadriorg Palace. Constructed by Russian Emperor Peter the Great as a gift to his wife, the palace is perhaps the best work of Baroque architecture in Eastern Europe. You’ll tour the insides of the palace, including the concert hall, and the manicured gardens and pond. That afternoon, return to the Old Town of Tallinn to take a journey through Estonian cuisine. Walk through the Old Town and Kalamaja Quarter to make six or seven stops at taverns, cafes, markets, and delis to try Estonian food and drink, such as creamy pumpkin soup, sprat sandwiches, and a drink of beer and cola called kali.

While based in Tallinn, you’ll also head on an excursion to the gorgeous landscape of Lahemaa National Park, where you will see beautiful historic manors, such as Sagadi Manor, swing by 500-year-old fishing villages such as Altja and Kasmu, and have the chance to stroll through an old beach forest and ponder the mystery of the Vana-Jurid kivid, huge stone boulders with an unknown origin.

After another night in Tallinn, you’ll head to the airport to connect back home or continue to your next destination.

Vanalinn, the Old Town of Tallinn, is one of the best-preserved medieval cities in Europe. Your guide will introduce you to the interesting mixture of German, Scandinavian and Russian influences here. In Upper Town, enjoy a walk along cobblestone streets and a view of the interesting Toompea Castle, which was built in the 13th century and rebuilt in the 18th century. The Russian Orthodox Cathedral of Alexander Nevsky with its interesting collection of icons has dominated Lossi Plats (Palace Square) since its construction in 1900. From here continue along Tallinn's medieval cobblestone streets past the Gothic Dome Church, also known as St. Mary's Cathedral. Enjoy a panoramic view of the towers and steeples rising above the red-tiled roofs of the Lower Town, then browse through the local shops before walking into the Lower Town. You will have a photo stop at Holy Ghost Church, a structure that retains much of its 14th-century appearance. Stop to admire the Gothic Town Hall. Completed in 1404, it is Tallinn's oldest civic building. Follows a visit to a famous Katariina Gild street with open studios and shops of artisans who daily practice their craft.

The tour to The Kadriorg Palace starts from your hotel in Tallinn. After arriving in at the palace, founded in 1721 by the Russian Emperor Peter the Great as a gift to his wife Catherine II for their summer residence, tour the well-preserved main hall with its rich stucco and ceiling paintings. Perhaps the best example of Baroque architecture not only in Estonia, but also tsarist Russia, it is a treasure of northern Europe. Excellent acoustics and the beautiful interior of this two-storied cupola hall make it one the best chamber music concert halls in Tallinn. Your tour also takes you through a marvelous park with a Baroque flower garden, Swan Pond and smaller park ensemble buildings like a summer house, kitchen house and guard's house which surround both the palace and a second nearby estate, the residence of the president.

Discover how Estonia's food, like its history, has been influenced by other cultures, leaving an indelible and, yes, quite tasty mark. What exactly is Estonian cuisine? It certainly has a Nordic twist but is often inspired by Russian and German kitchens. This private 'Tallinn Food Tour' offers you a glimpse into a surprisingly vivid culinary scene. Moreover, as you stroll around the historical cobblestone streets of Tallinn's UNESCO-listed Old Town, you might just discover the real soul of the city through its food while your guide adds more flavours with stories about the city today and historical tidbits from yesteryear. Your three-hour walk around the Old Town and the nearby Kalamaja quarter usually includes 6-7 food and drink stops that offer an introduction to the city's traditional and modern cuisine. Please be aware that while you are not going to be left with an empty stomach, don't think of the tour menu as the equivalent of a full 3-course meal. Food samples might include a traditional soup, maybe creamy pumpkin, and open-faced spiced sprat sandwiches. The Baltic Sea is full of sprats; served on fresh baked dark-rye bread with a boiled egg and a sauce, they are delicious. Kama is one of the most iconic Estonian foods and probably not found anywhere else in the world. It is used as an ingredient to make delicious Estonian desserts; however, locals also mix kama with buttermilk and serve it as a beverage for breakfast. You might want to try Kali, a mix between beer and cola with a natural fizz, but very low alcohol content. Estonia does, of course, offer some serious drinks too: local schnapps comes in many flavours, some made with genuine Estonian berries and rye spirit. There is lots more to see as you make your way around the medieval taverns, cafés, deli-shops, a typical Estonian restaurant, or a nearby market with smaller specialty shops and food concession stands. Be sure to remember that Estonia makes fabulous chocolate and marzipan. This is a wonderful tour for couples of all ages.

Enjoy a private tour to Lahemaa National Park, approximately 45 miles (70 kilometers) east of Tallinn, and home to the most beautiful manors in Estonia, unique and legendary fishing villages, as well as pristine natural landscapes. Your private guide will pick you up at your hotel and you can look forward to discovering Estonia's most popular nature reserve, just about an hour's drive from the city. The fabulous and completely restored Sagadi Manor complex is one of the trip highlights, and from here, a very short drive takes you to Vihula Manor, which highlights 800 years of history and in an expansive woodland park. It's home to migrating cranes and magnificently restored historical buildings, and you might just want to come back and overnight here. The fishing village of Altja dates back to 1465 and has many restored or reconstructed traditional buildings, including a wonderfully ancient-looking tavern. Lunch is optional but the tavern is definitely a great choice to sit down and reflect on the trip thus far. Among the truly pristine scenery in the area are the enchanting Oandu Forest, the incredibly unique wetlands of Viru Bog, as well as ancient coastal landscapes when you reach the village of Kasmu, located on a peninsula by the same name. It is one of most beautiful seaside villages in Estonia and, time permitting, you can follow a short part of the Kasmu trail from the end of the village, allowing you to emerge from a beautiful old forest onto the beach. The Vana-Juri kivid, huge boulders also known as the "erratic stones", add a lovely touch of mystery. This is a private excursion to provide many wonderful memories and is a great choice for active travelers of all ages.