FIRST-CLASS | TAILOR-MADE: Discover the magic of Istanbul, a unique capital city that straddles two continents. Visit the many historical landmarks, including Hagia Sophia, the Blue Mosque, and the Grand Bazaar, and cruise along the Bosphorus to see the city from the water. 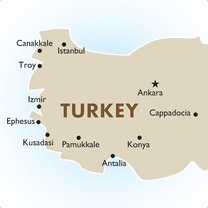 Your trip to Türkiye highlights the wonders of the Turkish capital, the only national centre to straddle two continents. Istanbul was known as Constantinople during antiquity and has long been one of the world’s greatest centres of art and culture. A classic tour of the city will take you to some of its many highlights from throughout the ages. Start at Hippodrome Square to see where chariots used to race for massive crowds during Byzantine times. Continue to the religious and cultural monuments of the Blue Mosque, Hagia Sophia, and Topkapi Palace, before closing out your tour at the Grand Bazaar, where you can barter for all manner of goods in one of the world’s great open-air marketplaces. The next day, see the city from the waters of the Bosphorus, which divides the continents of Asia and Europe. You’ll visit the Spice Market and close at the Bosphorus Bridge, built in 1973 to commemorate the 50th anniversary of the formation of the republic.

At the end of your stay, head to the airport to connect to your next destination or return home.

Panoramic Sea of Marmara views can be admired from the rooftop terrace of Radisson Hotel President Beyazit Istanbul. It is in the heart of Istanbul, 100 yards from the Grand Bazaar. The Hotel's modern rooms are soundproof, have a contemporary decor and offer views of the historic city.

Our final stop, Hagia Eirene, the Church of the Holy Peace, is one of the few churches in Istanbul that was never converted into a mosque, as it was used as an arsenal until the 19th century. Hagia Eirene reputedly stands on the site of a pre-Christian temple and has the distinction of being the first church built in Byzantium as it was converted into the capital of the Eastern Roman Empire. From there, we visit Gulhane Park, once a part of the outer gardens of Topkapi Palace, where the Edict of Gulhane, a declaration of rights and liberties that played an essential role in the modernization of the Ottoman Empire. After the proclaimation of the Republic, Gulhane Park was for many years home to the Istanbul Zoo.

On this shared half day tour, you will drive to the pier in Eminonu for a short visit to historical Spice Market (Egyptian Bazaar). This bazaar was built in 1664 as a part of Yeni Mosque complex situated nearby and is named Egyptian Bazaar because spices and herbs brought from or via Egypt were sold in it. Then, board a regular boat for the cruise along the Bosphorus, a narrow strait between the continents of Europe and Asia connecting Black Sea to the Sea of Marmara. During the Byzantine and early Ottoman days, there was little settlement on both sides of the Bosphorus but as of the 18th century, it became the favorite place for the sultans and their entourage where they built their kiosks and waterside residence.