The Tsar Route: Helsinki to Moscow

FIRST-CLASS | ESCORTED COACH TOUR: Delve into the history and decadence of Imperial Russia on this journey through Helsinki, St. Petersburg, and Moscow. During your Russia vacation, you'll explore imperial palaces and museums, marvel at mighty churches and monasteries, and travel into the heart of one of the planet's mightiest nations. 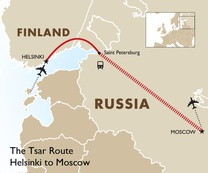 This 9-day Finland and Russia vacation is a journey through Imperial Russia, taking you from Helsinki to St. Petersburg and eventually the capital, Moscow.

Your journey begins in Helsinki, which is ground zero for any Finland vacations. This Daughter of the Baltic is a popular getaway spot and one of the most charmingly-designed cities in Europe. A sightseeing tour will take you to many of the most famous sites in the historical centre, including the imposing red granite Parliament Building, impeccably-designed Finlandia Hall, and the Temppeliaukio or "Church of the Rock," which is carved entirely out of solid rock. You'll also have the freedom to take advantage of Helsinki's design district, where artisan shops and art galleries fill the lanes, or head to the Seurasaari Open-Air Museum to learn about traditional Finnish lifestyles and customs.

From Helsinki, pass over the border in Russia, stopping off at Vyborg Castle, on route to St. Petersburg, the nation's imperial heart. Moscow might have become the Russian capital in 1917 but St. Petersburg remains the nation's greatest artistic treasure. Built by Peter the Great in the early 18th century, this Baltic port is full of palaces and cathedrals that show off two centuries of Russian decadence. A city tour will introduce you to many of the best sites. You'll gasp at the towering golden spire of the cathedral inside Peter and Paul Fortress, stand in awe of the Winter Palace, and learn about the country's religious traditions at the Nevsky Convent. The next day, you'll visit the Peterhof, Peter the Great's crowning achievement, as well as the State Hermitage, which houses the artistic wealth of the old empire.

Ride the high-speed train from St. Petersburg to connect to your final stop on Russia vacations: Moscow. As Russia's political and cultural capital, Moscow mixes old-world opulence and the bustle of a modern metropolis. In fact, it's one of the world's largest cities and simply witnessing the swell of traffic at day's end is humbling. During your time in Moscow, you'll visit some of the key sites of the city, starting at Red Square and St. Basil's Cathedral and working your way to the Bolshoi Theatre, Moscow University, and finally the Kremlin grounds, where the Russian government continues to govern the country to this day. You'll also have the chance to delve underground into the Moscow Metro to see the gorgeous, historical metro stations and enjoy an evening river cruise along the Volga. In your downtime, take advantage of Moscow's world-class foods and arts culture, whether that means enjoying some premium vodka or taking in a performance of Tchaikovsky at the Bolshoi.

This Baltic vacation through the heart of Imperial Russia dazzles with its mix of world-class cities and historical treasures.

Helsinki is located at the crossroads of Western and Eastern culture and this is reflected everywhere in the green and lively Finnish capital. The sightseeing tour takes you around the harbours and the Senate Square with the Lutheran Cathedral, up central Mannerheim Street and by the Parliament Building, the Finlandia Hall, and the Sibelius Monument and for a visit at the famous Church-in-the-Rock. The afternoon offers an optional excursion to Suomenlinna Fortress, a cultural treasure which construction was started in the 18th century as a sea fortress. Located on an island, fortress is a unique attraction for visitors.

St. Petersburg is an amazing city. Its imperial palaces and museums enjoy worldwide fame, while the Neva River and the many canals have deservedly given the city the title "The Venice of the North". During the morning sightseeing tour get acquainted with all the splendours of the city: the Peter-Paul Fortress, the Winter Palace, St. Isaac's Cathedral, the Church of the Bleeding Savior, the Nevsky Convent and much more. The afternoon offers an optional excursion to Zarskoye Selo with the impressive Catherine's Palace and the Amber Room, which vanished during World War II and was restored for St. Petersburg's tri-centennial celebrations. In the evening enjoy an optional visit to the Nikolaevsky Palace with an exciting Russian folklore show, Russian champagne and snacks.

The morning is reserved for an optional visit to Peterhof, an uncontested masterpiece of the time of Peter the Great, with the impressive Grand Palace, Grand Cascade and Water Avenue and its wonderful parks. In the afternoon, an optional visit to the world-famous Hermitage Art Museum is offered. In the evening enjoy an optional Russian dinner at Restaurant Pryanosti &amp; Radosti.

The early morning is reserved for an optional St. Petersburg channel cruise. Around noon you'll go to the Moscow Railway Station and board the Sapsan high-speed train bound for Moscow. The train ride will take you through endless Russian landscapes along the River Volga. In the late afternoon you'll arrive to Moscow and check in at Park Inn Sadu**** or similar.

Moscow, The Mother of Russia, is a genuine Russian city with the Kremlin and its onion domed cathedrals. The dramatic changes over the last decade have made the city to one of the most dynamic metropolis in the world. The morning sightseeing tour includes the highlights of the vast city: the Red Square with St. Basil's Cathedral, the Theatre Square with Bolshoi Theatre and Sparrow Hills with Moscow University and you'll visit the Kremlin grounds and one of the cathedrals. In the afternoon you are offered an optional visit to the Moscow Metro including the historical stations on the Ring-Line and a guided stroll along the famous pedestrian Arbat Street. The evening offers an optional Moscow by night tour including an unforgettable river cruise with the White Flotilla.

The day offers an optional full day excursion to the quaint town of Sergiev Posad, where you'll visit the Trinity Lavra of St. Sergius, the most important Russian monastery and the spiritual heart of the Russian Orthodox Church. The whole Lavra has been beautifully restored for the 700-years celebrations of the birth of St. Sergius of Radonezh. The evening offers an optional visit to the Old Russian Circus.

Optional transfer to the airport.