Spend over a week exploring some of Britain’s most popular highlights. Beginning in London, you’ll tour legendary cities like Edinburgh, Cardiff, and York, experience the famous countryside in Brecon Beacons National Park and the Cotswolds, and venture into the past at Stonehenge, Bath, and Hadrian’s Wall. 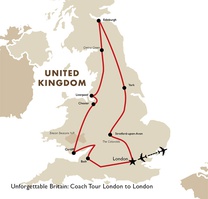 This 9-day England vacation takes you to popular cities and landmarks of the United Kingdom, including London, Cardiff, and Edinburgh.

Your trip to England begins in London, the capital of the United Kingdom and one of the most-visited cities on the planet. With history reaching back to Roman times and some of the finest architecture, galleries, cuisine, and culture to be found anywhere on the planet, you’ll find a lot to like about London. Spend a day sightseeing, heading to the most popular sites in the city, including The Houses of Parliament, Big Ben, Westminster Abbey, Buckingham Palace, and Tower Bridge. The next day tour Kensington Palace, the home of the British Royal Family since the 17th century. Tour the State Rooms and learn about the history of the British monarchy. In the evening, take in a musical or drama in London’s West End to complete your exploration of the city’s culture or head to a local pub to enjoy a pint among fast friends.

Continue your England vacation, heading west to Stonehenge, the ancient and mysterious stone monument that has transfixed visitors for centuries. Head on to Bath, where you’ll learn about this ancient Roman city and tour the famous Roman Baths. Pass into Wales and reach Cardiff, where you’ll head on a panoramic tour of the city, visiting Principality Stadium and Cardiff Castle. That evening, enjoy some world-famous Welsh hospitality as you feast on Welsh dishes and hear some songs in Welsh. Leave Cardiff and pass through Brecon Beacons National Park, known for its picturesque mountains and moorlands. Stop at the border of England and Wales to explore Hayon-Wye, a market town famous for its book. Pass on to Shrewsbury to see its black-and-white half-timbered homes before reaching Chester, where you’ll take a walking tour of its Roman treasures and medieval architecture.

Reach Liverpool, where you’ll learn about the Beatles, the greatest rock band of all time. Learn about the bandmembers’ childhoods and their early days as a band with The Beatles Story. Head north through the Lake District, the largest national park in the country and home to Scafell Pike, the highest peak in England. Pass into Scotland and reach Edinburgh, a city awash with medieval and Georgian architecture. Explore the Scottish capital with a panoramic city tour, heading to the medieval Old Town and Georgian New Town to see popular landmarks and explore the city’s contrasts. Head to Calton Hill to see its series of monuments and tour Edinburgh Castle, a gorgeous palace built on the summit of an extinct volcano.

On the final leg of your United Kingdom vacation, turn back south towards England and stop at Hadrian’s Wall, a massive fortification built by the Roman Emperor Hadrian in 122A.D. to keep northern tribes out of the Roman Empire. Continue to York, one of England’s largest cities, to head on a walking tour to see Roman and Viking historical sites. Stop at Stratford-upon-Avon to see the home of William Shakespeare and learn about the life of the bard. Then leave the Midlands and tour the Cotswolds, home to the honey-coloured limestone houses that are some of the prettiest buildings in all of England. Then return to London to connect back home.

Arrive at your chosen London area airport. Transfer to your London hotel under own arrangements. At 2pm, you will meet with your driver and guide in the hotel lobby before departing for a panoramic tour of London. Discover the iconic landmarks, architectural and cultural diversity, and fascinating history that makes London the most visited city in the world. Your London sightseeing tour will take you on a non-stop procession of recognisable sights, including The Houses of Parliament, Big Ben, Westminster Abbey, Buckingham Palace, Nelson's Column, and Tower Bridge. This evening enjoy a welcome dinner and drink at your hotel.

This morning you will visit Kensington Palace, which has been the residence of the British Royal Family since the 17th century and currently houses several members of the family. The State Rooms are open to the public to be explored, the palace offers exhibits incorporating cutting-edge digital presentations, interactive experiences, and even audio sequences that bring to life the gatherings of gowns, antique furniture, and other memorabilia of notable residents of the palace. The balance of your day is free for personal sightseeing and shopping.

OPTIONAL: Theatre tickets to a West End Show - prices will vary per show.

Today you will travel from London to Cardiff. As you travel through one of England's most historical areas, enjoy an en-route visit to Stonehenge. See the giant stones and explore the visitor centre to make up your own mind about how and why this mysterious stone circle came to be. Continue to the old Roman city of Bath and discover the Roman Baths, where well-preserved ruins bring Roman Britain to life. On arrival in Cardiff enjoy a panoramic tour and discover the old sites of Cardiff Castle alongside the futuristic architecture of the Cardiff Bay area and the Principality Stadium. Experience an unforgettable evening of Welsh hospitality in the historic surroundings of Cardiff Castle. Enjoy the best of Welsh entertainment, Welsh food and the warmest of welcomes from your hosts, who will entertain you with a selection of traditional and contemporary songs in both English and Welsh. Transfer back to your hotel.

Depart Cardiff and enjoy a scenic drive through Brecon Beacons National Park. From mountains to moorlands, the Brecon Beacons offer up a stunning mixture of peaks and rolling hills as far as the eye can see. Stop on the border of England and Wales at Hayon-Wye - a bustling market town known as 'the town of books' - for some free time. Then the black and white half-timbered houses and medieval buildings of Shrewsbury make it the perfect place for lunch under own arrangements. Your final sightseeing on this day is a walking tour of Chester where you will discover a treasure trove of Roman, medieval and Tudor architecture and history. Arrive in Liverpool and check into your hotel for the night.

This morning visit The Beatles Story and discover everything you will ever need to know about the world's greatest ever rock band at this award-winning attraction. The Beatles Story explores the lives, careers and times of The Beatles from their childhoods to world domination through fascinating exhibits and interactive themed areas. Leaving Liverpool head north through the Lake District - England's largest National Park which is home to sixteen lakes and Scafell Pike, the highest peak in England. On the Scottish border, you will then stop at Gretna Green, where generations of couples have eloped to get married - Britain's answer to Las Vegas! Continue to Edinburgh.

Today discover Edinburgh, the inspiring capital of Scotland, with a panoramic city tour. From the historical closes of the Old Town to the wide avenues of the New Town, explore an outstanding city of contrasts. See Calton Hill and its National Monument, rightfully giving Edinburgh its nickname: the "Athens of the North". Visit Edinburgh Castle. Sited on top of an extinct volcano, gaining stunning views across the City of Edinburgh, the castle has witnessed many of the defining events of Scottish history and has dominated its surroundings with majesty for centuries. Spend the balance of the day at leisure.

Travel from Edinburgh back to Northern England via the Scottish Borders. En-route stop for photos at the ruins of Hadrian's Wall. Built in AD 122 by Roman Emperor Hadrian, the purpose of this 80 mile long defensive structure was to keep out the 'Barbarians' to the north. Continue to the historically important city of York. York was a roman garrison town, Viking stronghold and prosperous medieval city and aspects of all this can still be seen today. Your York walking tour will follow medieval city walls and snake through the narrow medieval passageways of the Shambles.

Travel from York to London. En-route visit Shakespeare's Birthplace. In the charming town of Stratford-upon-Avon is a distinctive 16th century, half-timbered house where the great Bard William Shakespeare lived for much of his life. Today the building is a literary shrine to millions of pilgrims every year and gives visitors a glimpse into his life and times. Leaving the Midlands, journey south through the Cotswolds. Honey-coloured limestone houses, historical market towns and rolling green hills represent an unspoiled idyll of quintessential England. Continue to London and enjoy your final evening at leisure.

After a final breakfast at your hotel, transfer to the airport under own arrangements.