MODERATE | ESCORTED COACH: The Emerald Isle has always charmed visitors with not only its warm and friendly people but also with its lush and sometimes dramatic scenery, its historic castles and its rolling countryside. Add to this time in its colourful capital and you will not forget Ireland. 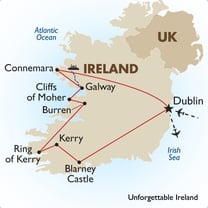 Stay overnight in Dublin before heading south to County Kerry and Blarney Castle where kissing the Blarney Stone is a tradition. Also visit the Blarney Woollen Mills, possibly the largest quality crafts shop in Ireland. Continue to Killarney in South West Ireland for a 2 night stay.

Enjoy here a tour of the exceptional Ring of Kerry on the Iveragh Peninsula with its mountains, peat bogs, lakes and magnificent coastal scenery with views of the Dingle Peninsula and Dingle Bay to the north. Have stops in Waterville and the village of Sneem famous for its coloured houses. Return via the Killarney National Park where you will have a pony and trap ride in what is known as a Jaunting Car. Later return to Killarney.

Leave Killarney and continue north to Tarbert where you will have a ferry ride across the Shannon River to Killimer. Then travel to the Atlantic Coast to view the immense and awe-inspiring Cliffs of Moher which rise sheer out of the sea to a great height and are 8 kilometres/5 miles in length. Call in at the Atlantic Edge Centre. After this, visit the Burren Region, a high plateau of porous limestone, a karsts landscape with some interesting plant life. Continue to Limerick for overnight. Here you can partake in an optional medieval banquet at the 15th Century Bunratty Castle including a 4 course meal with wine.

Travel north to Galway, your home for the next 2 nights. Here visit Galway Cathedral, one of the most impressive and largest building s in the city. Afterwards, have a 1 1/2 hour long cruise starting on the Corrib River and sailing into Lough Corrib, the largest lake in Ireland with its historic monuments. Return later to Galway.

The next morning brings a visit to Connemara, the land of mountains, rivers, lakes and small villages where the Gaelic language is still widely spoken. This area is the wildest and most remote part of the country. Travel through Connemara National Park with its diverse flora and fauna. Also visit Kylemore Abbey with its miniature cathedral before returning to Galway.

Today you will depart Galway and head back to Dublin. En route stop at Clonmacnoise on the banks of the Shannon and explore the visitors centre. Continue to Dublin. The North Side of the city offers striking monuments such as the GPO (General Post Office) on O'Connell Street & the Phoenix Park, the largest public park in Europe. The South Side appears more sophisticated with its vast Georgian squares and is home to Trinity College, Dublin Castle and two Anglican Cathedrals. Visit Trinity College, Ireland's oldest university and home to the Book of Kells. Later, consider an optional evening’s entertainment at Taylor's Three Rock (or similar), a lively pub in Rathfarnham for an excellent night of traditional music and dance.

The next morning, depart from Dublin completing your exploration of fascinating and friendly Ireland.

Arrive at Dublin Airport. Transfer to your Dublin hotel under own arrangements. You are free to explore the city at your leisure this afternoon. Your hotel will be within walking distance of the city centre.

Today meet with your coach and English speaking driver/guide &amp; depart Ireland's Capital traveling to County Kerry. En route, stop in the town of Blarney to visit Blarney Castle. Here you will find the legendary Stone of Eloquence. Kiss it and you'll never again be lost for words. Enjoy some time for shopping at Blarney Woollen Mills. It was bought in 1976 by a former worker and has been transformed into what is perhaps the largest quality craft shop in Ireland.

Today you can enjoy a superb tour of the Iveragh Peninsula, which will give you the opportunity to discover the Ring of Kerry. Taking in spectacular scenery - mountains, peat bogs, lakes and magnificent views of the Atlantic Ocean. Leaving Killarney pass through Killorglin, famous for its Puck Fair, then to Glenbeigh where the cliff road affords panoramic views of the Dingle Peninsula and Dingle Bay. Next arrive in the sea town of Waterville. Continue to Sneem Village, famous for its brightly coloured houses. Next today enjoy transportation of a different kind! A pony and trap (also known as a Jaunting Car) helps you discover areas of Killarney National Park that you might not otherwise visit. Relax aboard a jaunting car as your Jarvey [driver] takes you through the magnificent scenery of the National Park. Today enjoy dinner on your own in one of the many restaurants or pubs in Killarney town.

Burren and the Cliffs of Moher

Travel northwards to Tarbert and take a short boat ride across the mouth of the River Shannon to land on Clare's shore at Killimer. Travel along the coast to the Cliffs of Moher, the most majestic cliffs in Ireland which rise from the Atlantic Ocean. On a clear day, you can admire the Aran Islands and Connemara Mountains. Enjoy a tour of the Burren Region. The Burren is a high plateau of porous limestone situated in Northern Clare. The limestone is bare with no trees growing here or land covering the stone. But the Burren is not as deserted as we believe: the cracks allow different types of flowers to grow all year round. The rocks hide many caves such as the Ailwee Caves.

This morning travel to Galway City and get oriented with this beautiful place which has attracted many musicians andf artists. Visit Galway Cathedral, one of the largest and most impressive buildings in Galway built between 1958 and 1965. Next enjoy a cruise along Lough Corrib including scones and an Irish coffee. This journey on the Corrib Princess takes passengers along the majestic Lough Corrib and onto the lake. Visitors will see unsurpassed views of the historic monuments and natural amenities that make this one of the most spectacular waterways in Ireland.

Today travel through the beautiful Connemara Region filled with lakes, rivers, bogs and mountains. Enjoy some time at leisure in Connemara National Park. Visit Kylemore Abbey, built in 1868 by Mitchell Henry, and see its most famous feature the miniature Cathedral. It has been home to the Irish order of Benedictine nuns since 1920.

Depart Galway for Dublin today. En route visit Clonmacnoise on the banks of the Shannon. Explore the visitors centre and take a tour to see the high towers, the 11th century cathedral and the wonderful high crosses. Continue on to Dublin to discover Dublin's Fair City. The north side of the city offers striking monuments such as the GPO (General Post Office) on O'Connell Street and the Phoenix Park, the largest public park in Europe. The cities south side appears more sophisticated with its vast Georgian squares and is home to Trinity College, Dublin Castle and two Anglican Cathedrals. Visit Trinity College, Ireland's oldest university and home to the Book of Kells.

After a final Irish breakfast, transfer to Dublin Airport for your departure flight home under own arrangements.