Be amazed at the natural beauty of Iceland at your own leisurely pace on a self drive car itinerary. You will see dramatic scenery including waterfalls, active volcanoes, glaciers, bubbling mud pools and geysers. Iceland is nature’s wonderland just waiting to be discovered. 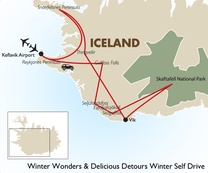 For the independent minded traveller who likes to make up their own mind as to the itinerary they would enjoy and the pace at which they wish to travel, Goway makes it easy to plan a vacation. Whether it is a self-drive car with pre-booked accommodation or a rental car, we have several suggested itineraries in Iceland which lend themselves perfectly to this type of arrangement. We also offer self-drives in other parts of the world.

Iceland is a country of extreme contrasts, a place where fire and ice co-exist. Vast, unspoiled nature lies at the doorsteps of a highly modern urban community. It is volcanically and geologically active. The interior consists mainly of a plateau of sand and lava fields, mountains and glaciers.

On arrival at Keflavik Airport, you will pick up your rental car and drive to Reykjavik for overnight accommodation. The next morning, set out for the great Geysir geothermal area, where mighty Strokkur shoots its towering stream of water every few minutes followed by the famous Gulifoss waterfall. Continue to Seljalandsfoss and Skogafoss Waterfalls and then on to Eyjafjallajokull, an active volcano covered by an ice cap.  Stay 2 nights at a local hotel in Vik.

The next day, visit the majestic Skaftafell National Park which is located between two glaciers and offers many hiking possibilities. The landscape is very similar to parts of the Alps, but it has been formed over thousands of years by different influences of volcanic eruptions.  Continue to the icebergs of the Jokulsarlon Glacial Lagoon later returning to Vik.

The following morning, head to the Thingvellir National Park, home to the world’s first parliament. The park itself is situated in a stunning volcanic landscape of mountains and lava flows on the edge of Iceland's largest lake. Continue to the Borgarfjordur Fjord and visit the historic site of Reykholt and also see the outstandingly beautiful Hraunfoss and Barnafoss Waterfalls and Deildartunguhver, the most powerful hot spring in Europe. Later check into your hotel in Hamar for a 2 night stay.

Depart for the natural wonders of the Snaefellsnes Peninsula which has mountains on one side and the sea on the other. Visit the Arnarstapi sea cliffs and the rocky beach of Djupalonssandur and then drive along the coast passing through small fishing villages before returning to your hotel.

Next up is the Reykjanes Peninsula with its moon-like lava fields. You can stop and take in the Krysuvik geothermal area with its bubbling mud pools. Visit Grindavik fishing village famous for its saltfish. Later arrive at the Blue Lagoon Thermal Spa where you can enjoy a dip in the warm mineral rich waters. After this, arrive back in Reykjavik for your last night in Iceland. Drop off your rental car the next day at Keflavik Airport.

Once you have landed at Keflavik Airport in Iceland, please pick up your luggage and head through customs. Collect your rental car at the Hertz desk at the airport and proceed to your hotel in Reykjavik. The rest of the day is yours to rest and use at your own leisure.

Gullfoss, Geysir and the South Coast

Head out of the city and drive to Gullfoss waterfall and Geysir hot spring, highlights of Iceland's famed 'Golden Circle'. Continue your trip, stopping at highlights such as Seljalandsfoss and Skogafoss waterfalls, and the infamous Eyjafjallajokull and surrounding area, the site of the infamous volcanic eruption in 2010.

Visit the majestic Skaftafell area, which is located between two glaciers and offers many hiking possibilities. Continue to the shimmering icebergs of Jokulsarlon Glacial Lagoon before returning to the charming village of Vik in the afternoon.

Drive to the UNESCO-listed Thingvellir National Park, site of the ancient Icelandic parliament and a jewel of nature. The park itself is situated in a stunning volcanic landscape of mountains and lava flows on the edge of Iceland's largest lake. Continue to Borgarfjordur fjord and visit the historic site of Reykholt, the remarkably beautiful Hraunfoss and Barnafoss waterfalls and Deildartunguhver, the most powerful hot spring in Europe.

Explore the countless natural wonders of the Snaefellsnes peninsula, which also happens to be a national park. With mountains to one side and the sea to the other, visit the wind-tangled Arnarstapi sea cliffs and the rocky beach of Djupalonssandur before driving along the north coast through bustling fishing villages.

Drive to the Reykjanes peninsula and visit the moonlike lava fields around Lake Kleifarvatn. Another suggested stop is at the Krysuvik geothermal area with bubbling mud pools. Visit Grindavik fishing village, famous for its heritage of producing saltfish (bacalao). Saltfish is undeniably responsible for the prosperity of the Icelandic nation, particularly during the late 19th and early 20th century when the industry was at its peak. There is then the OPTION to relax at the famous Blue Lagoon with a refreshing dip in the pleasantly warm geothermal waters, rich in silica and minerals that are great for the skin.

NOTE: Entrance and bathing fee for the Blue Lagoon IS NOT included in your trip price. It is very important that you book your Blue Lagoon entrance and timing in advance as it can be sold out during peak hours. Bathing times are not pre-set and must be pre-booked.

We recommend departing the hotel approximately 3 hours prior to the departure of your international flight.