MODERATE | SELF DRIVE: Grandeur describes this trip beautifully. The scenery is magnificent throughout but comes in flavours ranging from majestic and spectacular to, merely, breathtaking. Rocky Mountain National Park, Yellowstone, Bryce Canyon and Monument Valley are all in there while glimpses of the Old West can be found in Cortes and Durango. You can also enter the Garden of the Gods and admire pueblos and artisan enclaves in Taos and Santa Fe. 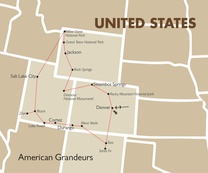 The American West is one of the most legendary landscapes in the world, laced with fiery, red-orange mountains, deep, twisting canyons, ancient rivers and sweet-smelling pines. It’s a great way to explore nature.

This 14-day adventure takes you to some of the most wondrous outdoor spots in the Western United States, including the geysers, mountains and meadows of Yellowstone National Park, the deep gorges and twisted spires of rock in Bryce Canyon, as well trendy art galleries in Santa Fe, New Mexico.

Your American West expedition begins in Denver, known as the Mile-High City. After you pick up your rental car and settle into your hotel, check out the trendy LoDo district for fine food, cutting-edge cocktails and lively nightlife.

The next day, take an easy drive to Rocky Mountain National Park, where you’ll find thick forests lined with nearly 600 km’s of hiking trails. You also can explore the well-known ski resort at Steamboat Springs.

Don your paleontology hat or pretend you’re a Jurassic Park researcher by checking out Dinosaur National Monument and the Dinosaur Quarry, which has revealed more skulls and dinosaur skeletons than any scientific dig in the world. Later in your trip you can marvel at the towering, spiky peaks of the Grand Tetons, which seem to pierce the blue western sky and might be the most beautiful mountain range in the U.S.

It’s a short drive from the Tetons to Yellowstone, America’s first national park and a legendary area for spotting bears, bison, and moose. You’ll also marvel at geysers that shoot hot water nearly 100 metres into the air, and admire multicoloured pools of mineral water. Later on, take in the majestic Mormon Tabernacle and the diverse dining scene in Salt Lake City.

You’ll have a full day and a little more to thrill at the sights of Bryce Canyon National Park and nearby Zion National Park, two of the world’s most remarkable destinations. Both feature otherworldly rock formations in shades of orange and red you’ve never imagined, all carved out by eons of sun, rain and wind.

Explore the deep, crystal-clear waters of Lake Powell and visit the Navajo Nation to learn about indigenous American history. You’ll also get to drive through the Painted Desert and Monument Valley, where so many classic western movies have been shot. Check out the indigenous homes carved into rocky cliffs at Mesa Verde and explore the old mining town of Durango.
Later, you can check out the artists’ colony of Taos in the mountains of northern New Mexico and explore the Spanish architecture and galleries of Santa Fe. Don’t miss a chance to try a hamburger topped with mild, tasty green chilies; a Santa Fe Speciality. The city also has a Margarita trail, so you can sip great cocktails.

Finish up back in Denver, where you can check out historic Larimer Square or sip the perfect cafe latte.

Arrive at Denver's International Airport and transfer independently to your hotel. Depending on your time of arrival you might be able to explore a little bit of a city that dates to the Old West era. Today it is an American metropolis that showcases marvellous 19th century buildings next to state-of-the-art museums. A tip for those in search of dinner conversation material, the mansion of Titanic survivor Molly Brown has been converted into a museum.

You have all day to explore Rocky Mountain National Park, an area that spans the Continental Divide with landscapes that include forests and alpine tundra, surrounded by protected mountains. The scenery is magnificent. Your destination of the day is delightful Steamboat Springs, a real western town that oozes charm and character. While winter sports are a big draw, the recreational options make it a serious adventure destination and it can boast of two fantastic hot springs in town.

Depart Steamboat Springs early in the morning and you can reach Dinosaur National Monument at the Colorado/Utah border in under three hours. Visit the Dinosaur Quarry, which has produced more skeletons, skulls, and bones of dinosaurs than any other dig in the world. Marvel at well over 1,000 dinosaur fossils still encased in the rocks they were found. Continue to the amazing Flame Gorge Reservoir and explore the Green River separated from the reservoir by the impressive wall of the Flaming Gorge Dam. You can indulge in several water activities on both the reservoir and the river. After an eventful day, you cross into Wyoming and arrive in Rock Springs after a drive of approximately 90 minutes.

Taking the most direct route to Jackson would get you there in about three hours. Driving via Boysen State Park and the gorgeous 40-minute Wind River Canyon Byway, north from Shoshoni, is breathtaking in good weather but adds at least 4 hours to your overall journey. Alternatively, if you stay on US-191 you reach Pinedale, the start of the delightfully scenic Wyoming Centennial Scenic Byway with mesmerizing views of Squaretop Mountain and Dinwoody Glacier and Gannett Peak. Arrive in Jackson by late afternoon and enjoy exploring the rustic town walking around the old-fashioned town square of Jackson that features arches made of shed antlers.

It’s a few minutes drive to Grand Teton National Park and Yellowstone is only another 40 minutes away. Plenty of time to explore both areas, you might think, but in truth it is not. First of all, the two parks offer completely different experiences. The mountains dominate Grand Teton, and the vistas are magnificent. If you wish to hike, bike, or go river rafting, this is the place. Yellowstone is for sightseers because it is full of iconic destinations, such as Old Faithful, Lamar Valley and Mammoth Hot Springs. It is also much bigger. Make sure you pre-plan what you want to see and how to see it.

Today is a long day of driving and an early start is highly recommended. You cross a small portion of the state of Idaho enroute to Utah and its capital, Salt Lake City. Idaho Falls, by the Snake River, is a fun place for a break, with unique restaurants and quirky boutiques along the river walk. Just before you reach Salt Lake City, there is Antelope Island, located within the Great Salt Lake and time permitting, it’s worth a visit just for the stunning views.

Leaving Salt Lake City in the morning, you have another relatively long journey ahead of you. It’s a pleasant drive, however, and to enjoy a captivating stretch of scenic road, consider leaving the main highway at Torrey and drive the rest of the way to Bryce Canyon National Park on Highway 12. This evening, weather permitting, be sure to gaze upon the spectacular night sky filled with sparkling stars and brilliant constellations.

You have a full day to explore Bryce Canyon National Park. Famous for its unusual geology, Bryce Canyon consists of a series of horseshoe-shaped amphitheaters where the power of wind, water and other geologic mayhem has etched the pink cliffs and shaped the colorful limestone rock into thousands of spires called ‘hoodoos’.

After having discovered the natural wonders of Bryce Canyon National Park, drive east via Kanab, where the exhilarating scent of sage and cedar fills the clear southwest air, to Page where the red desert meets deep blue Lake Powell, a vast blue man-made lake surrounded by beautiful sandstone walls.

Leave early to explore the Navajo Indian Reservation and pass the trading post of Cameron. You are now travelling through the Painted Desert to gorgeous Monument Valley, with its red sandstone spires and monoliths, an area that embodies perhaps the most iconic images of the American West. From there, cross into Colorado towards the town of Cortez, which enjoys a unique location on an imaginary border between the desert and the mountains.

Departing Cortez, it’s a 15-minute drive to the spectacular UNESCO World Heritage Site of Mesa Verde National Park. Take your time to explore the park to admire the breathtaking cliff dwellings, there are hundreds of them, and almost 5,000 archeological sites. The area offers an intriguing impression of where the Ancestral Pueblo people made their home for about 700 years from A.D. 600 onwards. Continue to Durango and experience the remarkable vibrancy of its historic downtown area. Step back in time at the Diamond Belle Saloon, an authentic Old West landmark, dating all the way back to 1887.

Enjoy magnificent scenery this morning while strolling one last time along Durango's Main Street lined with southwestern boutiques. Depart Durango and travel towards Pagosa Springs, a lovely place surrounded by the San Juan Mountains and the San Juan River flowing through town. Continue your journey, crossing into New Mexico towards a truly enchanting place, the artists’ colony of Taos.

The landscapes of Taos are a dramatic reminder that you are surrounded by some of the most ancient landforms on Earth. In the morning explore the remarkable Taos Pueblo, the only living Native American community designated both a UNESCO World Heritage Site and a National Historic Landmark. The multi-storied adobe buildings of this village have been continuously inhabited for over 1,000 years. In the afternoon, drive south to Santa Fe which was founded on the ruins of an abandoned Indian village. It is the oldest capital in the U.S. and remains one of the most picturesque cities in the state. Be sure to visit one of Santa Fe's famous art galleries, art markets, or museums full of traditional and contemporary art, including works by their own Georgia O'Keeffe; or shop for authentic creations you just won't find anywhere else before you return to Taos.

Today, you travel north through New Mexico before crossing back into Colorado. Panoramic scenery surrounds you all day long enroute to Denver, but you should consider a stop at Pueblo as well as Colorado Springs. The earliest permanent building in Colorado was allegedly erected in Pueblo, today a thriving place with riverwalk cafes, neighbourhoods filled with galleries, craft breweries and outstanding Mexican food. Colorado Springs is best known for its proximity to one of the most amazing geological wonders of the world, the Garden of the Gods. Time permitting, you can join a jeep tour or take a short hike. The views are stunning. The drive to Denver is only a little over one hour, allowing you to gauge an early evening arrival. Larimer Square remains the heart and soul of the city, and according to some it's the place to start a Denver experience.

Depending on your time, you might have a Mile High experience going up the gold-domed Colorado State Capitol with its ‘Mile High’ marker on the 13th step overlooking downtown. Afterwards make your way to Denver International Airport for your flight home unless you plan to extend your stay in Colorado