FIRST-CLASS | SELF DRIVE: Your journey opens with New York, New England, and New France (that’s Canada’s Québec City and Montréal, of course) but also visits Gettysburg, Washington, and Philadelphia, all deeply rooted in history. Ottawa, Toronto, and the Niagara peninsula, all in a region once called Upper Canada, are prominent features as well before you return to the Big Apple. A trip not just for history buffs, but offering captivating scenery, excellent culinary opportunities, and entertainment. 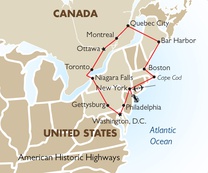 This 15-day tour will have you hot on trails of American patriots as you begin in New York and carve out the foothills of the northeastern states on a self-driven tour down America’s great highways. Historic monuments that paved the way for revolution meet you in places like Cape Cod, Boston, Gettysburg, Washington, and Philadelphia. Cross the border to America’s northern neighbour and tour the French-Canadian hubs of Quebec City and Montreal before setting your sights towards Ottawa, Toronto, and Niagara Falls.

Draw your own conclusions whether or not New York is the greatest city in the world and allow yourself to be dazzled by its bustling streets. After picking up your wheels, you’ll hit the road for the shores of Cape Cod where seafood shacks, quaint villages, and stoic lighthouses dot the landscape. Grab a lobster roll or two before buckling up for the revolutionary route that awaits you in Boston, tracing the steps of patriots who laid the stones for democracy in America.

Allow salty air to roll in your open windows as you head up the Eastern Coastline, stopping in Salem to learn about its infamous Witch Trials. Leaving spooky vibes behind, you’ll continue onwards to Maine where you’ll experience the rugged beauty and sapphire waters of Acadia National Park. Set up camp in Bar Harbour, nestled between Cadillac Mountain and the rocky coastline, and sample some world-famous Maine lobster.

Crossing the Canadian border, you’ll enter the Francophone province of Quebec, where rolling farmland and maple sugar shacks pave the way towards its capital. In Quebec City, feast your eyes on its European architecture and treat your taste buds to some poutine, one of Canada’s most iconic dishes after walking the walled city’s historic street. The towering Chateau Frontenac and the cobblestone streets that surround it will send you back in time as you take in the melody of the French language that surrounds you.

In Montreal, ascend to the top of Mont Royal, the centrally located mountain in the city’s core that offers sweeping views over the financial district and leafy parks. After working up an appetite, grab some smoked meat or wander into a new restaurant, with no shortage of eclectic eats to choose from as Canada’s culinary capital.

As you move into anglophone Ontario, you’ll tour Ottawa, the government capital and home to its impressive Parliament buildings. Heading south you’ll come to Toronto on the shores of Lake Ontario, where ethnically diverse neighbourhoods beckon you to explore their unique spirits. Crane your neck upwards at the CN Tower, the world’s largest free-standing structure, and take a walk across its glass floors if you dare.

Heading to Niagara, fruit trees and wineries are abundant as you trace their watery source to Niagara Falls. With over 28 million litres cascading over the falls per second, you’ll feel its force as mist sprays at you from all angles, understanding what makes it one of the natural wonders of the world.

As you cross its waters and head into Upstate New York, you’ll seek out your next waterway at the glacial Finger Lakes, providing a quiet spot for New Yorkers to relax and unwind. Carry on to Pennsylvania with a blast from the past as you explore its rural beauty and Amish community keeping old world traditions alive today. In Gettysburg, you’ll walk the Civil War battlegrounds where Union and Confederate forces once clashed, as one of the most decisive battles of the era.

Your history lessons continue as you move into the nation’s capital in Washington D.C, exploring the White House, Lincoln Memorial, Capitol Hill, and many museums. The spirit of American liberty isn’t complete without a trip to Philadelphia, where you’ll spend some time before returning your car to New York.

Arrive in New York City and transfer independently to your hotel. Depending on your time of arrival, you might be able to explore a little bit of the city. Going to a Musical on Broadway, spending an evening in Times Square, walking over Brooklyn Bridge, enjoying some shopping in Fifth Avenue, or feeling like a broker in Wall Street are some of the things that can ONLY be done in New York City.

Leaving the Big Apple, today’s journey takes you east through the coastal towns and villages bordering Long Island Sound. Take a break in New Haven, Connecticut or Providence, Rhode Island enroute to the rustic charm of Cape Cod. This hook-shaped peninsula in the state of Massachusetts, is a popular summertime destination. It's the site of quaint villages, seafood shacks, lighthouses, ponds, bays, and ocean beaches.

Explore the area in and around Cape Cod before heading to Boston. Perhaps visit the large town of Hyannis, where the John F. Kennedy Museum is the first stop on the Kennedy Legacy Trail through downtown, where ferries depart to the resort islands of Martha's Vineyard and Nantucket. On the way to Boston, visit the world-famous glacial boulder known as Plymouth Rock, located in Pilgrim Memorial State Park on the shore of Plymouth Harbor. Upon arrival in Boston consider joining a guided tour and learn about Boston’s history and its highlights.

Today’s journey takes you north along the Eastern Coastline, passing through Salem, Massachusetts, the sight of the only witch trials in the United States, and the historic port city of Portland, Maine. Then it’s on to Acadia National Park and Bar Harbor.

Journey across the Appalachian Mountains and past Moosehead Lake before crossing the U.S. border into the French-speaking Province of Québec. Bright blue and white farmhouses dot the landscape as you travel through rolling countryside toward the provincial capital of Québec City.

Enjoy the European charm of this UNESCO World Heritage treasure as you explore the narrow cobblestone streets of Old Québec with its quaint shops and take in over 400 years of history in the birthplace of French North America. The fortifications of Upper Town overlook Lower Town at the river front and you can take a funicular to get back up. Other important places to visit are the Citadel, the famous Château Frontenac Hotel, Place-Royale, the Plains of Abraham, and the Notre-Dame de Québec Basilica-Cathedral. About twelve kilometres outside town are the impressive Montmorency waterfalls, about thirty metres higher than Niagara,

Your drive today takes you southwest to fabulous Montréal. You can savour more French-Canadian flavour walking on its original cobblestones through historic Old Montréal, marvel at the architecture of Notre Dame Basilica or enjoy magnificent views of the city from the observation point at the top of triple-peaked Mont Royal. Add open markets, the unique boutiques of Saint Laurent Boulevard, the amazing Botanical Gardens, the nightlife of Crescent Street and, of course, an exceptionally vibrant culinary scene.

An early start is recommended today to ensure you have plenty of time to explore Toronto with its diverse neighbourhoods which make it one of the most cosmopolitan cities in North America. Little Italy, Greektown, Chinatown, Queen Street West, Kensington Market are just some of the areas worth exploring. Its culinary scene embraces cuisines from all over the world, its nightlife is vibrant and there’s theatres, galleries, and music clubs galore

Today, take a short drive to Niagara Falls make sure to stop by Niagara-on-the-Lake first. It's known for its wineries and the summer Shaw Festival, a series of theatre productions. The picturesque flower-filled, tree-lined old town features 19th-century buildings, mainly along Queen Street. Continue to Niagara Falls and take a stroll along Table Rock to view the thundering waters of the Horseshoe Falls or take a ride aboard Hornblower Niagara Cruises. Their ‘Voyage to the Falls’ takes you as close as possible to the Canadian Horseshoe Falls. Alternatively, you might opt to visit the Skylon Tower, hovering 775 feet above the Niagara gorge or let Lady Luck tempt you at one of the many impressive casinos.

Today’s journey takes you by the Finger Lakes region of upstate New York enroute to the state of Pennsylvania. The drive takes you through Amish Country where you step back in time and enjoy a slower, more peaceful pace, one where the horse & buggy remains a primary form of transportation, and where windmills dot the landscape, providing power harnessed from nature. The simple lifestyle of the Pennsylvania Dutch enhances the rural beauty of the area.

The Civil War battlegrounds of Gettysburg are of immense historical importance and a visit is highly recommended before heading south to the nation's capital, Washington, D.C. Before going out onto the battlefield, it is advisable to get some general background knowledge to prepare for your visit through the Film, Cyclorama & Museum Experience. This will help you to become better acquainted with the personalities, locations and tactics, and your trip to the battlefield will become much more meaningful.

Take the full day to explore the sights, monuments, and museums of the U.S. Capital. The Smithsonian Institution, a world-renowned complex of museums fronting the National Mall, is a repository of national artifacts and treasures. The views from the Lincoln Memorial, the Washington Monument, the White House, and Capitol Hill provide unforgettable images of the city.

Philadelphia, the last stop on your trip deserves a full day to explore one of America’s most historic and iconic cities. From the Declaration of Independence to the Liberty Bell, Grace Kelly to Rocky Balboa, Philly’s alive with history. Snap a photo in front of the Liberty Bell, pose with the Rocky Statue & run up the Rocky Steps, enjoy an authentic Philly cheesesteak or tour Independence Hall, the birthplace of the United States.

This morning return to New York City at your leisure. Once over the Delaware River you will arrive in the Garden State of New Jersey enroute to New York City. Make your way to one of New York’s three major airports from which you are booked for your flight home unless you plan to extend your stay in the city.