MODERATE | ESCORTED COACH TOUR: Discover one of the most fascinating parts of the United States, flavoured with a lot of history, captivating scenery, delicious food, and fantastic music. Charleston and Savannah, full of delightful antebellum architecture, represent the quintessential Southern cities, while Memphis, Nashville and New Orleans tell a comprehensive story about the Blues, Jazz, Country, Soul and Rock’n’Roll. The surprise stops on this trip might be the lesser-known places such as Montgomery and Natchez. 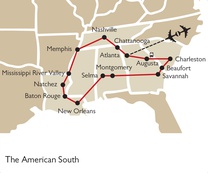 This 14-day tour brings you deep into the heart of the American South, whose lush landscapes draped in Spanish moss and dotted with Antebellum homes will make you feel like you’ve been whisked back in time. Soulful musical traditions await you New Orleans, Memphis, Nashville, and Atlanta, and rich history lines the colourful streets of Savannah, Montgomery, and Charleston on this guided trip that includes accommodations and sightseeing tours.

The preserved beauty of the Southern States is downright cinematic, peaking in vintage aesthetics at Stately Oaks Plantation, which inspired Atlanta-resident Margaret Mitchell’s novel and subsequent movie masterpiece Gone With the Wind. The Road to Tara Museum will contextualize the romanticized era from the film, including original scripts and costumes worn. In Atlanta, you’ll also have the chance to visit the childhood home and final resting place of Martin Luther King Jr, learning about the path he paved for the Civil Rights Movement.

You’ll be delighted by the colourful buildings and tree-lined streets of Charleston and Savannah, considered two of the prettiest cities in the USA. Both are places of resilience, holding much Civil War, Revolutionary, and Civil Rights history in their walls which can be seen at many monuments and museums after feasting at some of America’s finest restaurants.

The Civil Rights Movement takes centre stage in Montgomery, where you can visit the Rosa Parks Museum, learning about the woman who took a stand against racial equality and inspired Martin Luther King’s Montgomery Bus Boycott. The protests were organized from the Dexter Avenue King Memorial Baptist Church, where a mural commemorates the powerful sermons MLK gave in the mid-20th century. Trace the route to Selma, where King’s Selma to Montgomery March pressured Congress to pass the Voting Rights Act, giving millions of African-Americans the right to vote.

Moving into Louisiana, you’ll experience New Orleans, America’s most flavourful city where Spanish, French, Caribbean, African, and Anglo-Saxon culture collide into an eclectic and vibrant melting pot of food, music, and architecture. You’ll never go hungry in “The Big Easy”, as Creole culture created a delectable cuisine of its own, including gumbo, jambalaya, beignets, po-boys, and etouffee that you won’t find anywhere else. Jazz awaits you on every corner of the French Quarter, floating through the cobblestone streets straight to the life of the party on Bourbon Street. Follow the Mississippi River north to Baton Rouge and Natchez, the historic gem of the waterway famous for its Antebellum mansions and early ancestry of the Natchez Indians.

The home of blues and rock ‘n’ roll awaits you in Memphis, where music legends like Aretha Franklin, B.B King, Louis Armstrong, and more once played on the streets and in the music halls of iconic Beale Street. Established during the Civil War era, this lively entertainment district was historically a hub for black culture and entertainment, and played a key role as a meeting place during the Civil Rights Movement for both business and pleasure. In Memphis you’ll also have a chance to visit Graceland, the home and resting place of Elvis Presley.

Your ears may pick up more of a twang as you head northeast to Nashville, straight to the heart of country music. Take a tour of a recording studio downtown while keeping your eyes peeled for the new faces of bluegrass before exploring Music City, whether that takes you to the Country Music Hall of Fame or the Grand Ole Opry.

Travel to the foothills of the Appalachians to Chattanooga and the banks of its wide river, a newly redesigned area boasting local eateries, sprawling greenery, and the expansive Tennessee Aquarium. You’ll enjoy an afternoon with a peaceful walk along its waters before returning to Atlanta, where your tour guide can help you plan your next steps forward in the American South.

Arrive at Hartsfield-Jackson Atlanta International Airport and transfer independently to your hotel. Depending on your time of arrival you might have time to explore the city before meeting with your tour leader at the hotel. During the Civil War, Atlanta was one of the most important Southern Cities as it provided war materials to the South. In 1864, General Sherman marched into Atlanta and burned the entire city. The city recovered from its losses and today is one of the most dynamic in the South, boasting a successful cultural and business hub.

This morning, enjoy a comprehensive city tour of Atlanta, including a visit to the boyhood home of Martin Luther King. You also learn about another of Atlanta's most famous residents, Margaret Mitchell, who wrote the historical novel that became a masterpiece of American cinema, ‘Gone with the Wind and visit the Road to Tara Museum and Stately Oaks Plantation, which was the inspiration for plantation in the film. You even have an opportunity to see memorabilia from the movie including costumes worn by the stars Clark Gable and Vivien Leigh. In the evening, enjoy a welcome reception and meet your fellow travellers over a drink.

Leave Atlanta today and head west to Augusta. Augusta is the second oldest city in Georgia and is home to the prestigious Masters golf tournament. In the late afternoon, you arrive in Charleston one of the most historic and charming cities of the South. For evening activities, just consult your Tour Director who can suggest places to see and where to have dinner.

In the morning, enjoy a locally guided tour of Charleston Walk which is Charleston's preserved historic district, the best protected in the nation. Natural disasters, the Revolutionary War, and the Civil War all took their toll on this beautiful city, yet it stands out as a historic gem of the South. In the afternoon, you may wish to participate in an optional excursion to historic Boone Hall Plantation with its famous Avenue of Oaks. The property has appeared in numerous American movies, among them "North and South". Enroute to Savannah, stop at Port Royal Island and see Beaufort, South Carolina's second oldest city. Its impressive Antebellum architecture has been the backdrop for many shows and films, including ‘Forrest Gump.’

Today, enjoy the charm of Savannah, once the world's largest cotton port. When cotton was king, Savannah controlled the prices of the world cotton market at her cotton exchange. Founder James Oglethorpe laid out the famed city squares. The Civil War destroyed a large portion of Georgia, but Savannah was spared. Numerous buildings around the tree-shaded squares are hundreds of years old; providing the setting for the popular novel "Midnight in the Garden of Good and Evil."

Set course west across the state of Georgia and into the heart of the Deep South, Alabama. Upon arrival in Montgomery, Alabama's capital city and a central backdrop of the American Civil Rights Movement, visit the Rosa Parks Library and Museum. Learn about the Montgomery Bus Boycott inspired by Parks, which ignited the Civil Rights movement and changed American history. You may also wish to visit the Dexter Avenue King Memorial Baptist Church, where Martin Luther King Jr. led the Boycott with his powerful sermons.

Depart Montgomery this morning to discover Selma, Alabama, another centerpiece of the Civil Rights Movement. Visit the Edmund Pettis Bridge where the historic March from Selma to Montgomery began and where the brutal events of Bloody Sunday took place. Experience another historic site of the Civil Rights Trail, the Brown Chapel AME Church before heading south through Mississippi to New Orleans, a city immersed in Creole culture. Today, the city is a unique blend of Spanish, French, Caribbean, African and Anglo-Saxon influences which comes across strongly in the food, architecture and of course, the music. Experience this melting pot aboard a Riverboat Dinner Cruise (optional) and enjoy the rhythms of a Dixieland jazz band.

The day is yours to explore the charm and excitement of one of America's most unique cities and for you to take in the French flavor and grandeur of New Orleans. We suggest starting the day with a visit to a working plantation (optional) before you explore the French Quarter with its trademark wrought iron balconies overlooking the narrow cobblestone streets.

In the morning, you travel to the capitol of Louisiana, Baton Rouge, where you can enjoy a brief city tour. From there, travel via the historic Natchez Trace Parkway to Natchez, the oldest European settlement on the Mississippi River. The parkway is a 444-mile drive through exceptional scenery and years of Native American and European history. Before the Civil War, wealthy plantation owners from Louisiana built magnificent Antebellum homes here because the area was considered safer from flooding. This afternoon, you visit one of the homes and learn about the wealth of these 19th century millionaires.

Leave Natchez and drive on to Memphis, which as a large river port was one of the most important links in the cotton trade before the Civil War. Memphis is also known as the ‘home of the blues’ as well as the home of 'Sun Records', the famous studio where Elvis, Roy Orbison and Johnny Cash recorded their early music. A brief city tour takes you to the city's liveliest street, Beale Street, where blues and other forms of music are played nightly in almost a dozen clubs. Travel along historic Front Street, known as Cotton Row in the days when cotton traders and merchants conducted business here. Of course, no visit to Memphis would be complete without a visit to Graceland, the home of Elvis Presley (optional).

Continue to Nashville, known as the capital of country music. The city earned its title with the very first airing of the WSM Barn Dance radio program, the forerunner of the Grand Ole Opry. The newly renovated Ryman Auditorium in downtown Nashville, once home of the Grand Ole Opry, the studios near Music Row, and Opryland itself attest to Nashville's reputation as the most important city in country music.

Begin your day in the dynamic and thriving state capital of Tennessee with a morning city tour. While exploring the Nashville’s landmarks, perhaps you might discover a new country music classic before they even hit the charts while visiting one of the many recording studios around town. Perhaps enjoy dinner and a show in the evening as an optional excursion.

Leaving Music City, you head to Chattanooga, home to the famous Choo Choo, which has received national recognition for the renaissance of its beautiful downtown and redevelopment of its riverfront. In the afternoon, you return to Atlanta where you may want to check out any of the sites you were unable to experience at the start of the tour, such as the Georgia Aquarium, World of Coca Cola, or CNN Center.

Make your way independently to Hartsfield-Jackson Atlanta International Airport for your flight home unless you plan to extend your stay in the area.