FIRST-CLASS | SELF DRIVE: Allow yourself to be dazzled by the neon night sky of Las Vegas, America’s greatest lightshow and compare it to the sparkling stars when you look at the brilliant constellations displayed above you at Bryce Canyon. On this trip you can visit all of Utah’s Mighty Five as well as the UNESCO World Heritage Site of Mesa Verde National Park. To top it all off drive through Monument Valley, the most iconic image of the American West. 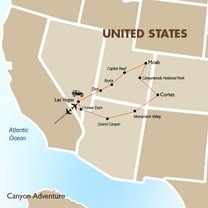 An 8-day whirlwind of four States, complete with the glitz and glamour, both artificial and natural of Las Vegas, five National Parks, Navajo Indian history and the Grand Canyon. The entertainment playground that is Las Vegas launches your adventure; a neon city where you can ride in a private limo (complete with a pole for dancing), peruse a mini version of Venice, New York, Cairo, Marrakesh or Paris in an afternoon, all while sipping on a rum punch the size of your arm in this city which is eternally open. Is Vegas the Entertainment Capital of the World? Catch a Cirque du Solei mind-bending masterpiece, see your favourite celebrity sing or cook you a meal, renew your belief in magic, or try your luck to win big money before a visit to the Mob Museum, or the Pinball Hall of Fame, you will be entertained all along the Strip.

While the bright lights of Vegas are emblazed upon your mind, continue west across the sloping, feminine curves of the desert to the magnificent cliffs of Zion National Park. Explore this land of the natives and the pioneers, where hulking sandstone cliffs of strawberry and vanilla reach to the heavens. The dramatic narrow slot of the park’s canyon and the array of plants and animals will have you struggling to put down your camera and just take it all in. Hop on an environmentally friendly shuttle or hike at your own speed at Zion National before heading to Bryce Canyon where the naturally carved red rock called hoodoos glisten in the sun and make one believe wind and rain are more artists than elements.

The Navajo may have named their village Ancient Enemies almost a 1000 years ago but today the largely unexcavated Anasazi Indian Village is open to explore by all who wish to learn about the Pueblo culture which existed here from 1 AD. Leave time to compete for most dramatic landscape between the Kodachrome Basin State Park (named by the National Geographic Society) and the Capitol Reef Park before arriving at the Moab Valley and the Arches National Park where erosion has crafted the sandstone like a sculptor to a rock. After a solid sleep, lace up your hiking boots and wander the canyons of Canyonlands National Park at your own pace; after all, it took 300 million years to form and commands attention. For the afternoon, marvel at the world-renowned Native American cliff dwellings at Mesa Verde National Park before ending the day with a well-earned meal and a long look at some of the brightest stars you’ve ever seen.

The drive to Monument Valley is all red sandstone spires and monoliths hewn from the earth like giant’s teeth. The trading post of Cameron is rife with handmade Navajo jewelry, rugs and baskets and has some of the tastiest prickly pear French toast you’ve ever sampled. The Navajo Indian Reservation is the place to explore the Navajo Nation, the largest American Indian reservation in the United States where you learn about this ancient culture whose language is so difficult, it was used as a secret code in World War II. End the day with the sun setting over the immense Grand Canyon, as a teaser for tomorrow.
You’ll need at least a full day to take in one of the great natural wonders of the world, and you’ll get it. See the gaping, curving spectacle of the Grand Canyon on an optional day trip by air and get a bird’s eye view of all its form, color, and geological significance. The winding, wild Colorado River weaves through the Grand Canyon with unsurpassed vistas. At 277 miles long and about 10 miles wide, the drop from the top to the bottom is 5,700 feet deep; do look down. Return to Las Vegas by the colossal Hoover Dam to Las Vegas where you will depart the next day with unparalleled memories of the best Nevada, Utah, Colorado and Arizona has to offer.

Arrive at Las Vegas McCarran International Airport and independently transfer to your hotel. The dazzling neon lights of Las Vegas need no introduction and it doesn’t matter what time you arrive; the city is open 24/7 and you can join in the fun at any time.

Today, enjoy a full day Las Vegas style. Walk the famous Strip lined with mega-resorts, place a bet at one of the many casinos, dine at world-class restaurants, catch the latest must-see show, shop designer boutiques, ride a rollercoaster, lie by the pool... the list goes on.

Leave the bright lights of Vegas behind as you travel across the desert to the magnificent Zion National Park. Most visitors park at the Visitor Center and then ride environmentally friendly shuttles through its most scenic areas. Stunning sandstone cliffs surround you as you admire its sheer majesty. Continue to the equally impressive Bryce Canyon, famous for its unusual geology, which consists of horseshoe-shaped amphitheaters where the power of wind, water and other geologic mayhem has etched the pink cliffs and shaped the colorful limestone rock into thousands of spires called ‘hoodoos’. This evening, weather permitting, be sure to gaze upon the spectacular night sky filled with sparkling stars and brilliant constellations.

Drive into Kodachrome Basin State Park, pass by the Anasazi Indian Village and continue through majestic Capitol Reef National Park. Located in the heart of Utah's red rock country, Capitol Reef National Park is a hidden treasure filled with cliffs, canyons, domes and bridges in the Waterpocket Fold, an unusual geologic feature that is like a wrinkle in the earth’s surface extending for nearly 100 miles. Afterwards visit Arches National Park, one of Utah's Mighty 5 to discover a landscape of contrasting colours, shapes, and textures unlike any other in the world. With over 2,000 natural stone arches, in addition to hundreds of soaring pinnacles and giant balanced rocks, this red rock wonderland amazes with its formations and inspires with its unique scenery. Minutes away from the park is Moab. Its unique combination of small-town hospitality and beautiful scenery has made it one of the most sought-after destinations in the Southwest.

Leaving Moab, you can explore Canyonlands National Park which took over 300 million years to form, before you drive south to the spectacular UNESCO World Heritage Site of Mesa Verde National Park. Admire the breathtaking cliff dwellings - there are hundreds of them - and almost 5,000 archeological sites. The area offers an intriguing impression of where the Ancestral Pueblo people made their home for about 700 years from A.D. 600 onwards.

Today you are travelling through the awe-inspiring Monument Valley with its red sandstone spires and monoliths, an area that, perhaps, embodies the most iconic images of the American West. Continue to the trading post of Cameron and through the Navajo Indian Reservation until you reach one of the 7 Natural Wonders of the World, the Grand Canyon.

Grand Canyon National Park defies description until you see it with your own eyes. Time permitting discover the distinct South Rim of the canyon. Stop at one of the dramatic lookouts, walk part of the Rim Trail or along the historic Hermit Road, visit a Photo Hot Spot or climb to the top of a stone Watchtower for breathtaking panoramic views that extend over one hundred miles on a cloudless day. When your head is full of stunning images it might be time to return to Las Vegas, where your trip started

Enjoy your day in Vegas and make your way to Las Vegas McCarran International Airport for your flight home unless you plan to extend your stay in Las Vegas.

*Indicates upgraded accommodation for this overnight