FIRST-CLASS | ESCORTED COACH TOURING: You are going to be surprised how many Canadian National Historic Sites there are to discover on this trip, some with UNESCO World Heritage designations. The warmth, charm, and humour of the people of Newfoundland is well-know and you can experience lots of it as you travel around the island. The stark beauty and mysterious landscapes of Labrador are a short ferry trip across from the island. Discover a piece of history here that dates to the 16th century. Impressively, the Viking settlements at L’Anse aux Meadows, at Newfoundland’s most northern point, are considerably older. 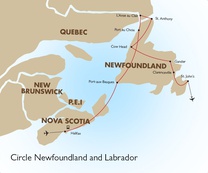 This 13-day escorted coach tour brings you through the seaports and sprawling meadows of Canada’s most charming province, where Viking and Acadian history date back hundreds of years. Discover the island’s friendly reputation as you move through small towns across the eastern province, strolling between colourful buildings and grassy knolls. This trip features first-class accommodations and small group tours with your local tour director who accompanies you throughout your journey across “The Rock.”

Enjoy new beginnings in Halifax, the largest city and cultural hub of Nova Scotia. A vibrant arts and culinary scene meets you here, as does the Canadian Museum of Immigration and the Maritime Museum at famous Pier 21. You’ll travel to Cape Breton Island, taking in jagged cliffs against deep blue waves before crossing those very waters overnight to Newfoundland.

The plains, windswept coast, and dramatic fjords of Newfoundland will provide ample opportunities for quiet reflection. Wind through ocean paths, magical forests, and sweeping valleys as you find a stunning sense of scope at Gros Morne National Park, Notre Dame Bay, Cape Bonavista Lighthouse Provincial Park, Witless Bay Ecological Reserve, and Terra Nova National Park. If the time is right, you may spot some icebergs that loom out of the sea as large as the Titanic itself at Twillingate, the “Iceberg Capital of the World”. Keep your eyes peeled for whales, moose, caribou, and puffins, the lovable black and white seabird who has rightfully claimed the crown as Newfoundland’s provincial bird. You’ll have time to chat with your new travel friends from the tour as you explore, but you might be left breathless by the unique beauty that awaits you on these ancient lands.

The most eastern province in Canada is home to rich Viking and maritime history as the location of many of North America’s first settlements. L’Anse aux Meadows provides fascinating archaeological remains of the first known evidence of Europeans in the Americas when the Norse people sailed over 1000 years ago. Step even further back in time at Port au Choix, where 6000 years of human history collide at ancient burial sites, unique limestone barrens, and diverse plant life right on the board of the sea, familial territory for the Maritime Archaic, Dorset, Groswater, and recent indigenous peoples long before the Vikings set foot on the rocky land.

Colourful towns painted in bright summer hues cover the island, including stops in L’Anse au Clair, St. Anthony, Cow Head, Gander, Twillingate, Clarensville, Trinity, and St. John’s, the capital and North America’s oldest city, making its map debut in 1519. Allow all your taste buds to soak in the local culture as you try a traditional Jiggs Dinner, cod, or mussels. In these towns, you’ll discover where Newfoundlanders get their reputation for being the friendliest people in Canada. There’s no shortage of live music, as locals love any occasion to sing and dance with both loved ones and strangers alike.

Just on the other side of the Strait of Belle Isle lies Labrador, whose lesser-known lands hold pristine beauty with an equally rich history and culture. At Red Bay, you’ll visit the remains of a 16th century Basque whaling station, whose archaeological finds lie both above and below the sea’s surface. You’ll spend the night in L’Anse au Clair, a village with a population of roughly 216 people with French roots.

Your tour will come to an end in St. John’s, where you can transfer independently to the airport for your trip home, or extend your stay as you explore the windy seascapes and picturesque fishing villages on your own.

Arrive at Halifax Stanfield International Airport and transfer independently to your downtown hotel. Depending on your time of arrival you might have some time to explore this bustling oceanside city. The city has a wonderful boardwalk, with lots of restaurants, bars, shops, and boutiques. Famous Pier 21 is home to the Canadian Museum of Immigration and the Maritime Museum, both worth a visit. Importantly though, you are invited to join a welcome reception at the hotel, a wonderful opportunity to get to know your travelling companions. Overnight Halifax

Today you travel via Truro and Antigonish, crossing over the Canso Causeway to beautiful Cape Breton Island. In North Sydney you then board a Marine Atlantic ferry for a relaxing overnight crossing to Port-aux-Basques, your port of entry into Newfoundland. Breakfast and dinner included. Overnight onboard ferry

Depending on the ferry schedule, passengers may overnight in Port-Aux-Basques (Hotel: St. Christopher’s Hotel).

Drive through the Cordroy Valley, framed by the Long Range Mountains, the Anguille Mountains, along the shores of the Atlantic Ocean. The journey continues through Gros Morne National Park and into the fishing community of Port au Choix where you check into your hotel. Port au Choix is a National Historic Site of Canada and considered one of the most important archeological finds in North America. Breakfast, lunch, and dinner included. Overnight Port au Choix.

Today you board a ferry at St. Barbe and cross the Strait of Belle Island on your way to Labrador. The landscapes are raw and dramatic and exude a beauty all their own. The fishing village of Red Bay was the location of a Basque whaling station in the 16th century and received a UNESCO World Heritage Site designation in 2013. Numerous whaling ships, including large galleons sank around Red Bay which led to the designation and makes it a prime underwater archeological site, perhaps the most important one in the Americas. A visit to Red Bay National Historic Site, is part of the trip today. Breakfast and dinner included. Overnight L’Anse au Clair.

This morning (weather-permitting) you embark on a whale watching boat tour hoping for sightings of these giant marine mammals. During certain summer months you can spot titanic-sized icebergs. Don’t forget your camera! Continue to Cow Head, your destination for the night. Breakfast and dinner included. Overnight Cow Head

Magnificent Gros Morne National Park, offering a rich variety of scenery, wildlife, and recreational activities is the focus of today. Embark on a scenic boat tour (weather permitting) to learn about the geology of the Tablelands, see the whales and bald eagles that frequent the deep waters of the fjord, and engage in the history of the small villages nestled along the shores. Breakfast, boxed lunch, and dinner included. Overnight Cow Head

Travel through central Newfoundland and arrive in Gander later in the day to check into your hotel to relax after a long day of travel. Gander International Airport use to be an important transatlantic refuelling stop. It is still a critical emergency option today and became famous after the 9/11 attack when the airport serviced thirty-eight aircraft and accommodated 6,700 passengers from several major European airlines. Breakfast included. Overnight Gander

A scenic drive along the coast of Notre Dame Bay leads to the beautiful town of Twillingate. At the tip of the island, you visit the Long Point Lighthouse and local co-op. Before travelling to Clarenville, your overnight stop, you come back to Gander to visit the North Atlantic Aviation Museum. Breakfast, lunch, and dinner included. Overnight Clarenville

The route today travels along the Trans-Canada Highway and through Terra Nova National Park, the most easterly of Canada’s national parks. Keep an eye out for a variety of wildlife! The day is capped off with a visit to Cape Bonavista Lighthouse Provincial Park and the charming town of Trinity. Breakfast, lunch, and dinner included. Overnight at Clarenville.

Today’s journey ends in the intriguing old seaport of St. John’s, your home for the next two nights. North America’s oldest city and Newfoundland’s capital boasts a stunning location in the granite cliffs and slopes of the Avalon Peninsula. You can enjoy a city tour featuring the Victorian architecture of the downtown area, the busy modern waterfront, the Cathedral of St. John the Baptist, Confederation Building, and the panoramic view from Signal Hill. Breakfast and dinner included. Overnight St. John’s.

In the morning, you travel to Bay Bulls for one of the highlights of the programme - a boat tour in the Witless Bay Ecological Reserve (weather permitting) to search for puffins and other seabirds. Afterwards you visit Cape Spear National Historic Site, the most easterly point in North America. The afternoon is at leisure to further explore the neighbourhoods and delights of St. John’s. Breakfast included. Overnight St. John’s.

Time for last-minute shopping and farewells. Make your way Individual transfer to St. John’s Airport in time to check in for your return flight.