FIRST-CLASS | SELF DRIVE: The Lincoln Memorial, Gettysburg, Colonial Williamsburg, Jamestown, and Philadelphia conjure up much of the colonial history you encounter on this trip while excellent museums await your visit to fill in or add to your knowledge of events and places. Magnificent scenery come courtesy of Shenandoah National Park, the Skyline Drive, one of America's most scenic routes, and the Eastern Shore, the longest stretch of wild coastline remaining on the entire East Coast. Of course, there’s also Chesapeake Bay blue crab and Philly cheesesteak. 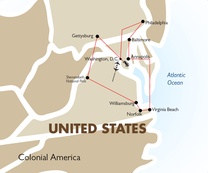 This 11-day trip whisks you back in time as you move deep into the heart of American revolutionary history. Beginning in Washington, this self-driven tour brings you from the capital to Gettysburg, Shenandoah, Williamsburg, Virginia Beach, Baltimore, and Philadelphia, taking in sweeping mountain and coastal views while learning the stories of those who forged their own paths on the land hundreds of years ago.

After picking up your rental car in Washington, you’ll have a wealth of history at your fingertips as you explore the centre of the Federal Government. Walk the long green stretches of the National Mall between the Lincoln Memorial to the US Capitol, admiring everything that lies within its boundaries. There’s certainly no shortage of collections to browse in the capital, from the National Museum of African American History and Culture to the Smithsonian Institute and more. Explore the waters of the Potomac River or neighbourhoods filled with intellectual types by foot or bike, taking in each iconic monument as you go.

Civil War history awaits you on the battleground at Gettysburg, site of a crucial turning point in the war where Union forces held off the Confederate army’s attempts to reach the north. You can walk the pastoral plains as you pay homage to fallen soldiers on your own, or take a guided tour that details battle tactics and the grim realities of war in the 19th century.

Your eyes will marvel at the graceful folds and stunning rock formations at Luray Cavern, whose ceilings tower 10 stories high. This geologic marvel is filled with crystal-clear pools and “singing” stalactites that you have to see with your own eyes and ears to believe. Your journey into nature continues at Shenandoah National Park, whose rocky ridges and dramatic valleys are part of the South Appalachians. The park puts its full beauty on display in the fall, illuminating in brilliant shades of red, orange, and yellow as you hike through its winding paths.

Driving south, continue to marvel at the leafy foliage and hilly peaks on Skyline Drive, one of America’s most scenic roadways. Visit Charlottesville, the former home of Thomas Jefferson, before continuing on to Richmond. You’ll be able to spot the towering architecture of the James River Plantations that line the scenic route along the James River. Synonymous with slavery in America, these buildings have been preserved to look as they did 200 years ago.

Colonial-era history awaits you in Williamsburg and Jamestown, the latter of which was the earliest English permanent settlement in North America. These towns have conserved their history, offering visitors a look at what life was like in the early colonies with a number of museums featuring historical actors.

Continuing to the coast, you’ll find larger-than-life fun on the sandy boardwalks and vibrant coastal ‘hoods at Virginia Beach, as home to both the world’s longest pleasure beach and longest bridge-tunnel complex in the world. Early risers will enjoy calm sunrises over the Atlantic before driving to Maryland for a tour of the US Naval Academy. In Baltimore, you’ll love strolling around the Inner Harbour of this historically significant seaport, a sightseeing hub containing the aquatic kingdom of the National Aquarium and an eclectic cluster of hip bars, eateries, and music venues in a former power plant.

Crossing into Pennsylvania, you’ll want to beeline for Philadelphia, birthplace of both the cheesesteak and American liberty. This hub of history and culture will delight all your senses, from the harmonies of the Philadephia Orchestra to running the famous Rocky steps. Get your bearings on the modern pulse of Centre City West, a neighbourhood that blends sleek skyscrapers with historic monuments like the Liberty Bell and Independence Hall, where the Declaration of Independence was signed.

When you make it back to Washington, you might be inspired to go see the document for yourself at the National Archives Museum before returning your rental car to the airport for your flight home.

Arrive at Ronald Reagan Washington National Airport or Washington Dulles International Airport and transfer independently to your hotel. Depending on your time of arrival, you might be able to explore a little bit of the city. The views from the Lincoln Memorial, the Washington Monument, the White House, and Capitol Hill all provide unforgettable images of the city. Tomorrow you have a full day to explore Washington’s sights, monuments, and museums and you might wish to plan your day over a dinner in the U.S. Capital.

A full day to explore Washington, D.C. Start by strolling along the ‘Mall’ and discover many important monuments or lose yourself in some of the world's most inspired museums. After lunch why not journey across the Potomac to nearby Alexandria unless you prefer to rent a bicycle and continue your exploration of the city. This evening we suggest a visit to the lively Georgetown area of Washington where some of the best chefs vie for your attention.

Leave the seat of government behind today as you travel to one of the most fascinating Civil War battlefields. Gettysburg is of immense historical importance and before going out onto the battlefield, it is advisable to get some general background knowledge to prepare for your visit through the Film, Cyclorama & Museum Experience. This will help you to become better acquainted with the personalities, locations and tactics, and your trip to the battlefield will become much more meaningful.

If you wish, you can explore more of Gettysburg before you head west towards the gorgeous Shenandoah National Park, bursting with cascading waterfalls, fields of wildflowers and quiet wooded hollows. You should certainly stop and visit Luray Caverns, one of the most beautiful caves in the world and the largest in the eastern United States. Walking through it is almost like an otherworldly experience. The town of Shenandoah is in the heart of the ‘Valley’ along the banks of the Shenandoah River. It’s a lovely small, rural community of just under 2,500 citizens.

Your drive south this morning takes you along the natural wonders of Skyline Drive, one of America's most scenic routes. You can see the peaks of the Blue Ridge Mountains which have a distinctly bluish cast, especially in summer. From there you continue to Charlottesville and visit Monticello, the home of Thomas Jefferson, built on a glorious mountaintop. Next is Richmond, Virginia's capital, rising high above the sparkling James River, before traveling along another gorgeous scenic road by the James River Plantations to Williamsburg, where restoration and preservation have turned back the clock 200 years.

Colonial Williamsburg is the largest living history museum in the world. Costumed interpreters welcome you and you can meet a Nation Builder like George Washington or Edith Cumbo and admire the craftsmanship of some of the best artisans in the world. Afterwards you drive on to see the earliest permanent English settlement in North America at Jamestown. Continue to the Yorktown Battlefield, where Washington's decisive victory over General Cornwall's forces turned the colonists' dream of a new nation into reality. Soon after you pass through Norfolk, Virginia's premier port city, to Virginia Beach, boasting 30 miles of sandy seashore and a 2-mile-long boardwalk. Time to relax this evening and dip your toes in the ocean.

Enjoy a day in the city that is listed in the Guinness Book of Records as having the longest pleasure beach in the world. To continue with this record-breaking tradition, the city itself is located at the southern end of the Chesapeake Bay Bridge-Tunnel, the longest bridge-tunnel complex in the world.
The city’s First Landing State Park marks the 1607 arrival of the Jamestown colonists from England, a distinct point of interest. You might also consider a visit to Cape Henry Lighthouse, the Virginia Aquarium & Marine Science Centre and, possibly, Chesapeake Bay blue crab for dinner.

Leaving Virginia Beach in the morning, you drive north across the Chesapeake Bay Bridge-Tunnel to the tranquil Eastern Shore, the longest stretch of wild coastline remaining on the entire East Coast. From here you cross into Maryland with a possible stop at Annapolis, home to the U.S. Naval Academy. You can also visit the State House and visit the Academy before continuing onto Baltimore. This evening, stroll along Baltimore’s magnificently rebuilt Inner Harbor with its many shops, boutiques, upscale crab shacks and attractions like the Civil War-era warship the USS Constellation and Fort McHenry, the birthplace of the ‘Star-Spangled Banner’.

This morning you are bound for the City of Brotherly Love, Philadelphia, one of America’s most historic and iconic cities. From Independence Hall, the birthplace of the United States, to the Liberty Bell, Grace Kelly to Rocky Balboa, Philly’s alive with history. It also boasts. a world class art museum as well as superb shopping and dining. Talking about any culinary aspects, a special mention goes to the world-famous Philly cheesesteak.

Philly deserves a little more time before you drive to Washington, D.C. which is just under three hours. Why not snap a last photo in front of the Liberty Bell, pose with the Rocky Statue and run up the Rocky Steps? Once you arrive in Washington remember that in case you did not see the monuments of D.C. by night at the start of your trip then tonight is your opportunity to do so.