DELUXE | SELF-DRIVE: Embark on a journey visiting the urban centers and the rural splendor of Ontario and Quebec. Start with cosmopolitan Toronto and Canada’s capital Ottawa. Venture into Quebec along the St. Lawrence River to fascinating Quebec City. Turn inland to the Saguenay region and the rolling hills and dense forests of Mauricie, Trois Rivières and, finally, vibrant Montreal, the second-largest French-speaking city in the world. Returning to Ontario, visit historic Kingston and its tranquil Thousand Islands. 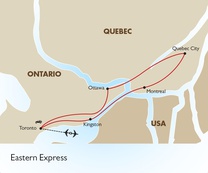 This 8-day journey takes in some of the top sights of Canada, including amazing cities and beautiful islands.

Your trip begins in multicultural Toronto. Try shopping at the boutique stores of West Queen West or the bustling, historic Distillery District, which also has several outdoor patios. Enjoy a drink at a trendy cocktail bar before you retire for the night. Toronto has a great waterfront. You can explore scenic parks on the shores of Lake Ontario such as HTO, with its sunny, yellow umbrellas, or take a harbour cruise. The city also has ferry boats that can take you to the Toronto Islands, where you’ll find acres of parks, small homes with perfect gardens, and sensational downtown views. Toronto is only 90 minutes from Niagara Falls.

Drive east today, following the shoreline of Lake Ontario. Kingston is the gateway to the beautiful Thousand Islands. The nearby town of Gananoque has boats that can take you on a Thousand Islands tour. You also can schedule a helicopter ride over the region. The drive to Ottawa takes you past quaint towns such as Smiths Falls.

The Parliament Buildings in Ottawa are being renovated, but it’s still a thrill to see them from the outside. The National Gallery is a beautiful building with tremendous works of art, while the Byward Market is one of the top shopping experiences in the country. Try a bike ride or a walk along the Rideau Canal, a UNESCO heritage site. You’ll be making your way to Quebec City today, but you’ll have time to wander around the riverfront city of Trois Rivieres.

Your next day is free for exploring Quebec City, the oldest city in Canada and the only walled city in North America. Enjoy the atmosphere and shops in the picturesque alleyways of the Quartier Petit Champlain. Don’t miss a stroll along the wide boardwalk of the Dufferin Terrace, which offers commanding views of the St. Lawrence River. Stop in at the Fairmont Chateau Frontenac hotel for a drink at the bar.

The next day’s drive takes you through the fertile plains and rolling hills of the Mauricie/Bois-Francs and Lanaudiere regions. Stop in Berthierville and visit the Gilles Villeneuve Museum, then continue to the vibrant city of Montreal. Visit the stunning Notre-Dame Basilica, the Montréal Museum of Fine Arts or Mount Royal Park, one of the world’s great urban green spaces. Stroll the streets of the Plateau district and enjoy a fresh Montreal bagel, or stop in at Schwartz’s Deli (partly owned by Celine Dion) for a smoked meat sandwich.

Cross the border into Ontario and explore Old Fort Henry in Kingston, which dates to the 1830’s. A fully costumed military parade is held daily. You also can take an excellent tour at the Kingston Penitentiary. Don’t worry, it’s been closed for years.

The road west along the shores of Lake Ontario leads back through the bountiful lands of Prince Edward County, replete with tasty restaurants and great wineries.

Arrive at Pearson International Airport, Toronto, and transfer independently to your downtown hotel. The Roadbook you received will have all the information needed for your holiday/trip/journey. The Remainder of your day is at leisure, perhaps shopping at the Eaton Centre or sampling the fine cuisine and nightlife of Toronto.

The day is free to discover Toronto at your own pace. You can explore the Harbourfront area on foot, take a cruise or the ferry to lovely Toronto Island. Visit city landmarks such as the Rogers Centre (formerly the SkyDome), Ripley’s Aquarium near the base of the CN Tower or the famous tower itself. The express glass elevator getting you to the top is a thrill. Then again, you might opt for a shopping experience at the multi-level Eaton Center. Of course, you can also have a great time driving to Niagara Falls, visit a vineyard, or get up close to the Falls themselves.

Drive east today, following the shoreline of Lake Ontario and pass through the small communities and villages that dot the landscape. The city of Kingston is home to the prestigious Queen’s University and is the gateway to the beautiful Thousand Islands.  The road turns north along the Rideau Heritage Route in and intermittently follows the Rideau River. The route takes you through riverside towns such as Smiths Falls and Edmond’s Lock until you arrive in the afternoon in Canada’s national capital.

Before departing Ottawa today, you may choose to visit the Parliament Buildings, some museums, the National Gallery, a tour of the Royal Canadian Mint or enjoy a leisurely boat ride on the Ottawa River. Crossing the border into the province of Quebec, taking the north shore of the St. Lawrence will bring you through the town of Trois Rivières. A stop at the Cathedral of Immaculate Conception, a rebuilt Gothic cathedral featuring magnificent examples of stained glass throughout the church, is well worth it. Later you pass through the walled gates of Quebec City for two days of exploring this historic, beautiful city.

Spend a full day in Canada’s oldest city. Founded in 1608, Québec City is the only walled city in North America and a designated United Nations World Heritage Site. The best way to see the numerous historic buildings and experience the city’s unique French culture is to take a leisurely walk through the enchanting, cobbled streets, and narrow laneways. in Québec Don’t miss a visit to The Fortifications, a historic national park, Place Royale, the Basilica, the Plains of Abraham, or the dramatic shrine at Ste. Anne-de-Beaupre. If you have time, a little outside the city are wonderfully natural settings of Montmorency Falls and Ile d'Orleans.

Today’s scenic drive takes you through the fertile plains and rolling hills of the Mauricie / Bois-Francs and Lanaudiere regions heading for the forests and unspoiled scenery of Lac à la Truite. Stop in Berthierville and visit the Gilles Villeneuve Museum, then continue to the vibrant, cosmopolitan city of Montreal. Time permitting, you can visit to Notre-Dame Basilica, the Olympic site, the Biodome, the Montréal Museum of Fine Arts, Mt. Royal Park, Casino, or the underground city. Remember, the city can also boast of an incredibly amazing culinary scene.

Cross the border into Ontario and explore the tranquility of the Thousand Islands region. Visit Upper Canada Village in Morrisburg or Old Fort Henry, a historic fortification dating from the 1830s where a fully costumed military parade is held daily. You may choose to visit colonial grounds of Queen’s University, or the museum of the Royal Military College, the oldest military academy in Canada. Enjoy a cruise* of the beautiful Thousand Islands – an unforgettable trip through the near countless small inlets that are home to a wide variety of marine mammals and waterfowl.

*not included for departures Oct 7-21

The road west along the shores of Lake Ontario leads back through the fertile lands of Prince Edward County, replete with historic communities boasting former residences and summer homes of Canada’s British-era governors and magistrates. The area contains several successful vineyards and cheese makers, inviting visitors to stop in small villages such as Picton for a taste of the local fare. Continue afterwards to Toronto’s Pearson International Airport to check in for your return flight, or your hotel if you plan to extend your stay.