MODERATE | RAIL TOUR: From the bustling seaport of Halifax to the vibrant city of Toronto by train, with stops in the Québec City and Montréal for plenty of magnificent French flavour. Combining big city flair, the romance of rail travel and riveting landscapes across three provinces makes for a superb trip not just for train buffs. 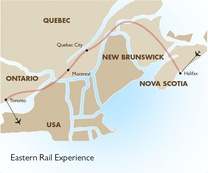 This 8-day rail tour begins in Canada’s East Coast and propels you through Québec and all the way to fashion-forward Toronto on this delightful taste of English and French Canada.
Begin in Halifax where kindness is king and lobster so plentiful, it’s found at fast food or the finest restaurants. Grab a McLobster on the way to Pier 21, an emotional place, where immigrants entering Canada first disembarked, often coming from great hardships. Submit to the ocean and listen to the gulls cry over the deep blue waters on a day cruise around the harbour and look out for a sudden spray of water, it could be a humpback.

Aboard the VIA Rail’s The Ocean train to Nova Scotia and New Brunswick you wonder if you’ve ever seen such raw beauty out the window of a train as the rolling hills of the Baie des Chaleurs and the lovely curves of the St. Lawrence lull you to sleep.

In the pop-up museum which is Québec City, walk, dream and drink steamy café along cobblestone streets which have been there for three centuries. Why is it in Québec City, the most romantic of Canadian cities, thoughts of love bubble to the surface? Ah, maybe because here, crème brulée never tasted so good.

Next stop Montréal where St. Catherine Street is vibrating with new designers, live jazz, stand-up comedy and tiny bistros lit by candles. The competition for most romantic city in Canada is fierce but someone has to investigate so let the clickity-clack of the train bring you to trendy Toronto where the locals are polite and polished, the lounges slick and sultry in this modern city business centre with thick vein of art and innovation along the shores of Lake Ontario. Try any neighbourhood: Little Italy, Chinatown, Little India, Little Portugal, Little Poland, and more; in this pulsating centre of culture and diversity, you can dance salsa, dine on silky risotto and conclude the evening with kiwi bubble tea. Toronto will certainly charm your heart before heading home.

Arrive at Halifax Stanfield International Airport and transfer independently to your downtown hotel. The front desk of the hotel is holding all the information needed for your trip. Depending on the time of your arrival you might have time to exploring this bustling oceanside city. Halifax has a wonderful boardwalk, with lots of restaurants, bars, shops, and boutiques. Famous Pier 21 is home to the Canadian Museum of Immigration and the Maritime Museum, both worth a visit. Alternatively, enjoy dinner at one of several seafood restaurants or try the city’s interesting music scene in a downtown bar.

A full day is yours to discover Halifax’s proud maritime heritage on your own. The city is a centre for East Coast arts and culture, boasting galleries and local artists that capture the essence of Canadian Maritimes life. You may decide to visit the restored Historic Properties, the Citadel that has guarded the city since the 18th-century, the Public Gardens or perhaps arrange a day cruise around the harbour for an ocean side perspective of the city.

Via Rail/ The Ocean - Halifax to Sainte-Foy

Today you make your own way to the Halifax rail station, board VIA Rail’s The Ocean and depart early afternoon on your rail passage to Sainte-Foy. Relax and enjoy lunch on board the train. The train winds across Nova Scotia and New Brunswick before passing by the rolling hills of the Baie des Chaleurs. Once evening arrives, the views outside offer long shadows over the landscape to accompany your delicious on-board dinner, and the rock and sway of the train ensures a restful sleep on your overnight journey.
Overnight on-board VIA Rail

The morning sunrise shows the train following the shores of the mighty St. Lawrence River and you can enjoy delightful landscapes over breakfast.  After you disembark in Quebec City, make your own way to your hotel and check-in.  The rest of the day is yours to discover why this historic city draws thousands of visitors each year. Some of the most popular destinations and attractions worth visiting are the Latin Quarter, the Plains of Abraham, the Fortifications, the National Assembly, Place Royale, or the Basilica. (Breakfast on the train).

Via Rail / The Corridor - Quebec City to Montréal

Breakfast is included with your hotel stay and after checking out you proceed to the Via Rail station to continue your journey onboard VIA Rail’s Corridor service to Montréal. The train’s route follows the shoreline of Canada’s busiest waterway along the St. Lawrence River until you arrive in the bustling metropolis of Montréal. As the second-largest French-speaking urban centre after Paris, the city is renowned for its love of music, the arts and hospitality. Walk down lively St. Catherine Street with its numerous shops and cafes, or once the sun sets, sample the fine cuisine at one of hundreds of restaurants, or take in a session at a lively jazz club. Overnight in Montréal

Today’s 3.5-hours sightseeing tour of Montreal features numerous highlights, such as the Notre Dame Basilica, the financial and residential districts, historic Old Montréal, and the quaint Latin Quarter. The tour continues with a visit to the Olympic Complex, travels through the campus of McGill University and lets you savour the panoramic views from an observation point on top of Mont Royal. Overnight in Montréal

Via Rail / the Corridor - Montréal to Toronto

Today’s journey takes you through the captivating small townships and communities of Québec and Ontario enroute to Canada’s largest city, Toronto. Upon arrival and after checking into your hotel take the rest of the evening to either enjoy the amenities of your hotel or sample Toronto’s outstanding culinary scene and vibrant nightlife.

Today you check out of your hotel and proceed independently to Toronto Pearson International Airport for your flight home unless you plan to extend your stay.