MODERATE | SELF-DRIVE: Our route through the Maritime offers the very best of Nova Scotia and Prince Edward Island. Start in Halifax before traversing Nova Scotia’s picturesque fishing villages and rugged coastal landscapes at the Bay of Fundy. Travel to charming Prince Edward Island and admire the beauty of the low rolling countryside of Canada’s smallest province and cradle of Canadian confederation. Make your way to Cape Breton and enjoy breathtaking views on the Cabot Trail. 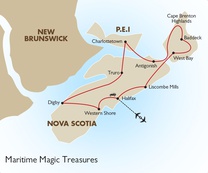 Fourteen days. The best of Nova Scotia and Prince Edward Island, this trip offers up picturesque fishing villages, rugged coast landscapes and one of the world’s best drives.

Kick things off in Halifax, which has a terrific waterfront boardwalk lined with tempting restaurants and shops. Visit Pier 21, home to the fine Canadian Museum of Immigration and the Maritime Museum.

Halifax is located on one of the world’s largest natural harbours. Try the fully narrated Harbour Hopper amphibious tour, featuring sights such as the Halifax Public Gardens and Citadel Hill National Historic Site, followed by a harbour tour in the same vehicle, offering unique views of George’s Island and Cable Wharf.

Today you travel west along the Nova Scotia coast. Take a detour to beautiful Peggy’s Cove, then head down towards the South Shore . Stop in the pretty village of Chester, or check out mysterious Oak Island, which is rumoured to hold buried treasure.

Your resort is located on the beautiful southern shores of Nova Scotia, with breath-taking views of Mahone Bay and Oak Island. Go for a stroll along the resort’s seaside trail and observe humpback and fin whales.

From here you’ll head west. Stop to stretch your legs and enjoy the lovely nature at Kejimkujik National Park and Historic Site.

Drive along Nova Scotia’s northern shore and admire the Bay of Fundy, world-famous for its high tides. Stop in the historic village of Annapolis Royal, home to one of the oldest settlements in Canada, and check out the great wineries near Wolfville.

After your overnight in Truro, make your way to Pictou and explore Hector Heritage Quay, where the first Scottish settlers arrived in 1773. Take the ferry from here across to Prince Edward Island.

Your day is at leisure to explore the Victorian homes and elegant squares of Charlottetown. You’re only a short drive from the boardwalk and beach at Prince Edward Island National Park.

Return to Nova Scotia via the ferry, and head through tranquil scenery and small communities that celebrate the region’s Scottish, Native and Acadian identities.

After an overnight in Antigonish, head over the Canso Causeway onto magnificent Cape Breton Island.
Head to the lakeside town of Baddeck, home to the fascinating Alexander Graham Bell National Historic Site and museum.

Arise early and enjoy a drive along the Cabot Trail. Meander through the rugged Cape Breton Highlands National Park, enjoying stunning views of sea-swept headlands, steep cliffs, and tranquil beaches. If time allows, stop for a drink and maybe some live music at the Red Shoe Pub in Mabou.

From Baddeck it’s only a short drive to the Fortress of Louisburg National Historic Site, one of the historically most significant places in North America. Wander through the reconstructed buildings and watch interactive demonstrations by staff dressed in historical costumes.

After a night in Baddeck, make your way back over the Canso Causeway to the Eastern Shore. Drive along the rugged southern Nova Scotian coastline as you head for Liscomb Mills.

The drive from Liscomb Mills to Halifax runs along the quiet Eastern Shore. You’ll pass small, charming villages such as Ecum Secum and quiet, pristine bays. Check out the waves at Lawrencetown Beach, just outside Halifax.

Arrive at Halifax Stanfield International Airport and transfer independently to your downtown hotel. The Roadbook you received has all the information needed for your holiday/trip/journey. The remainder of your day is at leisure for exploring this bustling oceanside city. The city has a wonderful boardwalk, with lots of restaurants, bars, shops, and boutiques. Famous Pier 21 is home to the Canadian Museum of Immigration and the Maritime Museum, both worth a visit. Alternatively, enjoy dinner at one of several seafood restaurants or try the city’s interesting music scene in a downtown bar.

Halifax is located on one of the world’s largest natural harbors and bears all the hallmarks of both a modern and historic city. You can discover its proud maritime heritage in the many museums and along the waterfront area, which includes the restored Historic Properties. Visit the Citadel that has guarded the city since the 18th-century, the Public Gardens or sail on a harbor cruise aboard the Bluenose II. Today you also take a fully narrated Harbor Hopper amphibious tour, featuring sights such as the Halifax Public Gardens, Citadel Hill National Historic Site, St. Paul’s Church, and bustling Spring Garden Road; followed by a harbor tour in the same vehicle, offering unique views of George’s Island, Cable Wharf, the waterfront boardwalk, and Historic Properties.

Today you travel west along the Nova Scotia coast through the outskirts of Halifax. Driving along the northern shore of beautiful St. Margaret’s Bay, you arrive in the picturesque Western Shore area, just across the water from magnificent and mysterious Oak Island.

Your resort is located on the beautiful southern shores of Nova Scotia with breath-taking views of Mahone Bay and legendary Oak Island. Go for a stroll along the resort’s seaside trail and observe humpback and fin whales as they play off Tancook Island. Try a traditional Nova Scotia dish while enjoying the spectacular views of the water as sailboats glide gently across the bay.

Today you head west and cross the heart of Nova Scotia and the near pristine wilderness that is home to a wide variety of woodland animals. You can stop for a day hike at Kejimkujik National Park and Historic Site; the hiking trails and canoe routes are accessible from Kejimkujik Lake and lead deep into the park’s interior and its remote island-dotted lakes.

Drive along Nova Scotia’s northern shore and admire the Bay of Fundy, world-famous for its high tides. The vertical range between high and low tide can be as much as 15 m, the greatest rise of water on earth. Twice a day, 160-billion tonnes of water flow in and out of the Bay of Fundy. On your way through this beautiful stretch of land, you can visit historic landmarks, such as the Annapolis Royal Area, the Grand Pré National Historic Site, and Fort Edward National Historic Site, and learn more about Nova Scotia’s Scottish, Acadian, and native heritage.

Make your way to Pictou, the “Birthplace of New Scotland”, and explore the Hector Heritage Quay where the first Scottish settlers arrived in 1773.Take the ferry from here across the Northumberland Strait to Prince Edward Island, Canada’s smallest province, noted for its attractive and peaceful charm, as well as its fruitful, low rolling countryside. Arrive in the charming city of Charlottetown, the “Cradle of Canada’s Confederation.”

Your day is at leisure to explore the Victorian homes and elegant squares of Charlottetown. The city is the island's commercial center, but despite its contemporary character the city displays today, it still manages to evoke the feeling of a colonial seaport with quaint sections such as Great George Street and Old Charlotte Town.

Return to Nova Scotia via the Northumberland Strait, and drive along the North Shore Drive through tranquil scenery and small communities that still celebrate Nova Scotia’s Scottish, Native and Acadian identities.

After leaving Antigonish, you soon arrive at the eastern reaches of the Northumberland Strait, where the ocean narrows, and you drive across the Canso Causeway onto Cape Breton and its commercial hub of Port Hawkesbury.  Continue through gentle rolling fields of the bay area as it transitions into the beautiful Bras D’Or Lake lowlands. Arrive in Baddeck, known as the gateway to the Cape Breton Highlands.

A free day free in Baddeck suggests, of course, a drive along the breathtaking Cabot Trail into the highlands of northern Cape Breton. The trail runs past picturesque lochs and glens settled by Scottish Highlanders and along scenic coastlines settled by Acadians. Meander through the rugged Cape Breton Highlands National Park, enjoying stunning views of sea-swept headlands, steep cliffs, and tranquil beaches.

DAY 12 - Baddeck to West Bay (86 km / 53 miles)
Today you travel south, passing charming maritime communities that still celebrate their Scottish heritage. Tour the Fortress of Louisburg National Historic Site, one of the historically most significant locations in all North America. Enjoy exploring the reconstructed buildings and interactive demonstrations by staff dressed in historical costumes. Try 18th-century cuisine at one of the period restaurants, serving authentic meals that the original inhabitants would have enjoyed. Historical re-enactments are performed throughout the season, giving visitors a glimpse of both the majesty and hardships of life in colonial Canada. Continue to Bras d’Or Lake, considered to be one of the world’s best sailing and boating venues.

Depart West Bay and shores of Bras d’or Lake and travel through Port Hawkesbury and back over the Canso Causeway on to the western shore. Consider altering your route and turn south to drive along the rugged southern Nova Scotian coastline. The coastal highway passes through great natural habitats, beach parks and dramatic shorelines along Nova Scotia's eastern Atlantic coast before arriving at Liscombe Mills.

If time allows, make your way to the Liscombe Game Sanctuary, a 250-square-kilometre area of virgin Nova Scotian Forest with an abundance of wildlife, such as moose, deer, mink, and muskrat. Follow the Marine Drive back to Halifax Stanfield International Airport or check into your hotel if you plan to extend your stay.