MODERATE | ESCORTED COACH TOUR: Most of the great National Parks, all in one trip. Yellowstone, the Grand Tetons, Arches National Parks, Bryce and, of course, the Grand Canyon offer spectacular scenery and material for many dinner conversations. Start in fabulous San Francisco, see Lake Tahoe, Salt Lake City and Flagstaff. Cross the Mojave Desert on your way to the glitz of Las Vegas before traversing the Mojave Desert, dotted with Joshua trees to arrive in glamorous Los Angeles. 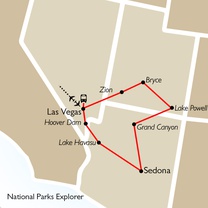 This 14-day tour gives you full freedom of Canada’s mountain roads, leading you on a self-driven tour of the most breathtaking locations in the Canadian Rockies. Your adventure awaits in Calgary, where you’ll get in your car and head eastward towards Vancouver’s Pacific Coast, with stops in Banff, Jasper, Lake Louise, Kamloops, and all their natural gems in between.

Your Road book contains all the information you’ll need for this expedition, so take off with confidence for Banff. From your base at Buffalo Mountain Lodge, you’ll be in direct view of the lofty peaks above due to its unique location on Tunnel Mountain. The town holds many wonders as well, including potential wildlife sightings from wild elk and deer who like to stroll through its streets alongside tourists, doing their fair share of window shopping at Banff’s many boutiques and restaurants.

Pyramid Lake Resort awaits you in Jasper on one of the most scenic drives in the world, so take your time getting there as mountain peaks loom and pines give way to hidden rivers in Alberta’s wild interior. Consider a stop at Peyto Lake, whose waters are such a deep blue that you’ll think it’s artificial. That’s just the natural beauty of the Canadian Rockies, not even counting the waterfalls and alpine meadows stretching as far as the eye can see.

Jasper brings no shortage of adventure nor imagination. Prepare to get wet as you embark on a white-water rafting trip, a thrilling ride suitable for absolute beginners. New experiences abound in this ecological marvel, which you’ll confirm after looking into the depths of Maligne Canyon, whose history dates back 10,000 years. You’ll also get a glimpse of the disappearing Medicine Lake before a trip to Maligne Lake, where you’ll cruise on clear waters to Spirit Island for a world-famous viewpoint of the Rockies followed by a tasty treat at the Lake Chalet. You can rest the next day, when you’ll board the Ice Explorer at the Columbia Icefield for a journey on the Athabasca Glacier.

No two lakes in Alberta are the same, which you’ll find out when you meet the picture-perfect shores of Lake Louise at Baker Creek Mountain Resort. Find inner peace along its clear waters, challenge yourself to a hike with your difficulty level of choice, or check out the abundance of adventure tours in the area.

The border between British Columbia and Alberta lies between mountain and forest, which you’ll traverse on its roads towards Glacier National Park and Mount Robson, the tallest peak of the Canadian Rockies. Crane your neck upwards and carry on towards Kamloops, where you can relax in your hotel or get right back into the outdoors. Kamloops’ reputation as an outdoor activity hotspot is no joke, but if you’d like to take a sports break, you can absorb some history at the Firehall Museum or board the Kamloops Heritage Railway for a short tour in summer.

The drive to your final stop in Vancouver is an unforgettable one that traverses ranch land, making you feel like you’ve taken a step back in time as you spot herds of cattle and cowboys on horseback. Feel the roar of the Frayer Canyon and its river as over 750,000 litres of water rush through the Hell’s Gate Gorge every minute, which is best viewed from a gondola ride about.

Once in Vancouver, freewheel through the streets of Canada’s “Gateway to the Pacific” as salty sea air mixes with the hustle and bustle of this modern city. Take a city tour that shows you all its most lively sights, from Chinatown, Gastown, Robson Street, Stanley Park, Capilano Suspension Bridge, and more.

At the end of your stay, make your way to the Vancouver International Airport for your flight onwards.

Arrive at San Francisco International Airport and transfer independently your hotel. Depending on your time of arrival, you might be able to explore a little bit of the city by the Bay and there is a briefing with your tour director at the hotel in the evening. San Francisco is a walking city and has great neighborhoods waiting to be explored.

Take a city tour which includes Union Square, the Civic Center and Fisherman's Wharf. Standing on a hilltop, watching the fog swirl in through the Golden Gate, it is easy to understand why many consider San Francisco the most beautiful city in America. Enjoy the afternoon and evening at leisure, perhaps a cable car ride to Fisherman's Wharf where one may enjoy a ‘Taste of San Francisco’: local seafood, famous sourdough breads or decadent Ghiradelli's Chocolate. Or take a stroll by Sea Lions' Marina to watch them frolic and play. Be sure to gaze across the bay to Alcatraz Island where ‘America's Most Wanted’ such as Al Capone and ‘Machine Gun‘ Kelly were incarcerated.

Depart for Sacramento, capital of the ‘Golden State’ with a stop in its Old Town, once a bustling center of the Gold Rush and terminus of the Pony Express. Continue to gorgeous Lake Tahoe, nestled in the Sierra Nevada Mountains. In the afternoon visit Virginia City, a 19th century mining metropolis where the Old West comes to life. A short drive takes you to Reno and your hotel, where you may be tempted to try your luck in the casino.

Journey through the Black Rock Desert and across the plains of northern Nevada. Follow the Humboldt River along the route that was once used by early pioneers on the Oregon and California Trails. Visit Elko, the formerly rough and tumble town that sat at the end of the tracks laid from the west by the Central Pacific Railroad. Crossing the state line at Jackpot you enter Twin Falls, located within Idaho's Magic Valley region.

Leaving Twin Falls, you cross the Snake River, known as ‘The River of No Return’ and visit Craters of the Moon National Monument. This eerie desert landscape so closely resembles lunar conditions that the training for the first men on the moon took place here. Later this afternoon you arrive at Yellowstone National Park, established in 1872 by Ulysses S. Grant as the nation's first National Park.

This morning's journey is through the rugged, snow-capped mountains which welcome you to Grand Teton National Park. Visit the Snake River Outlook and try your eye at capturing the stunning landscape made famous by Ansel Adam's iconic photograph. This prairie land is home to wild buffalo, called Tatanka by the Lakota, moose, and elk. Continue to Jackson Hole, the sophisticated ‘Crown Jewel
of the Rocky Mountains. Travel through southern Idaho to Salt Lake City in the Mormon State of Utah. See the State Capitol building and visit famed Temple Square and the Tabernacle before arriving at the hotel for the evening. May we suggest dinner at the Roof Restaurant for panoramic views of Temple Square? (optional). Overnight Salt Lake City

Heading south this morning, pass through Provo, home to Brigham Young University, enroute to Canyonlands National Park. Discover a wilderness of countless canyons and fantastically formed buttes carved by the Colorado River and its tributaries. Rivers divide the park into four districts: the Island in the Sky, the Needles, the Maze, and the rivers themselves. You can visit some of the most scenic spots in the Island in the Sky mesa that rests on sheer sandstone cliffs over 1,000 feet above the surrounding terrain. Continue to Moab for your stay tonight.

Today you visit Arches National Park, one of Utah's Mighty 5 to discover a landscape of contrasting colours, shapes, and textures unlike any other in the world. With over 2,000 natural stone arches, in addition to hundreds of soaring pinnacles and giant balanced rocks, this red rock wonderland amazes with its formations and inspires with its unique scenery. In the evening enjoy an optional Jet Boat Float trip on the Mighty Colorado River.

Visit Capitol Reef National Park, a destination of extraordinary natural beauty, established in 1937 to protect a unique geological feature. Continue to spectacular Bryce Canyon, where a tour through a multi-colored world of sandstone spires and pinnacles, "hoodoos", will dazzle the eye. This evening, weather permitting, be sure to gaze upon the spectacular night sky filled with sparkling stars and brilliant constellations.

Travel to stunning Lake Powell today, where crystal blue water laps against towering red rock canyon walls. After crossing the Colorado, enter the Navajo Indian Reservation and drive through the Painted Desert via Cameron Trading Post. Arrive at the Grand Canyon, one of the 7 Natural Wonders of the World. Stop at the rim to closely experience this mile-deep colorful canyon's plunging gorges and rising spires formed by the mighty Colorado River.

Descend the high Coconino Plateau into the mesmerizing Mojave Desert. Along the way, pass through Seligman, a town built along the famed Historic Route 66 that looks as if it were frozen in time 60 years ago. From here you travel to Las Vegas, the dazzling ‘Entertainment Capital of the World.’ The remainder of the day is at leisure for you to explore the famous Las Vegas Strip.

Enjoy a full day Las Vegas style. Walk the famous Strip lined with mega-resorts and flashing neon lights, place a bet at one of the many casino tables, dine in world-class restaurants, catch the latest must-see show, shop designer boutiques, ride a rollercoaster, lay by the pool ... the list goes on. With so much to do, 24 hours in a day hardly seems like enough.

Today starts with a stop at the iconic Las Vegas Welcome Sign where you may wish to capture a last photo memory. Travel to Los Angeles through the Mojave Desert where singing sand dunes, cinder cone volcanoes and clusters of unique Joshua trees dot the mountainous landscape. Upon arrival in Los Angeles enjoy a tour including Hollywood, Sunset Strip, and parts of Beverly Hills, before reaching your hotel.

Transfer independently to Los Angeles International Airport for your flight home unless you plan to extend your stay in the area.