MODERATE | SELF-DRIVE: Enjoy a perfect week in New England. Encounter history around every corner, from Boston’s Freedom Trail, the witches in Salem to the original pilgrims and the Mayflower II in Plymouth. Add to that the breathtaking scenery of New Hampshire’s Mount Washington, the Green Mountains of Vermont and, of course, magnificent Cape Cod. 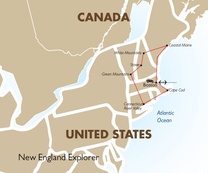 This eight-day trip sets your sights on America’s northeastern states as you explore the charms of New England, from Boston to small-town shores and the mountains that divide its leafy interior. Your self-driven tour will have the option for a curated selection of unique accomodations with character and history, giving you some extra warmth at the end of each day.

Your journey begins in Boston, a city with deep roots in American revolution and democracy. History buffs will love strolling on the Freedom Trail, an iconic 2.5 mile long path that passes by 16 monuments of great importance for American liberty. Take in the city from a unique perspective aboard a Duck Tour trip, showing you the city’s greatest sights by boat as you take in river views of Trinity Church, Faneuil Hall, and the Holocaust Memorial. Sports fans might try to catch a Red Sox game at Fenway Park, or watch it on the big screen at one of the many bars lining Landsdowne Street.

North of Boston, you’ll follow the coast to Salem, home to the infamous Witch Trials. Pay your respects to the women who were accused of witchcraft and learn more about the hysteria that overtook the town in the 17th century, giving you a spookier vibe if you visit in fall.
Your horizons will brighten as you continue on to coastal Maine for views of the east coast’s finest Atlantic seascapes. Sandy beaches meet rugged rock on the road to Portland, Maine’s largest city, offering time for quiet reflection and sampling local seafood in small towns like Gloucester and Rockport. In the harbour town of Portland, you’ll find not only a wealth of freshly caught lobster, but an incredible variety of locally brewed craft beers. Sample a flight after you tour a microbrasserie, leaving it no mystery why Portland is one of America’s best beer cities.
Heading inland, leave behind salty shores for tree cover as you move towards the White Mountains, also known as the “rooftop of New England.” These mountains will bring you breathtaking lookout points in every season, but will be particularly stunning in fall as shades of red and gold sweep across the landscape. The interior is also home to wildlife like bears, moose, deer, and wild turkey, so drive carefully as you move deeper into the tranquil interior. You’ll also find quaint villages nestled into the forest, giving you a fairytale-like sense of wonder as you explore local cafes and restaurants run with a warm New England friendliness.
Next, drive alongside the Green Mountains after a night in Stowe, a ski resort in the hills of Vermont. As you may have guessed, verdant landscapes meet the eye, rolling from peak to valley off into the distance. The winding waters of the Connecticut River Valley will allow you to step back in time at Old Sturbridge Village, where you can take a peek into 19th century New England society, with or without your horse drawn carriage.

Moving south, follow the circular beams of lighthouses to the Massachusetts coast. Here, you’ll find a unique culture of seaside life populated in the summer by America’s most prominent families. Drive right to the tip of Cape Cod, the famous peninsula known for its quaint villages, laid-back atmosphere, and long stretches of beach. Enjoy a lobster roll or fried clams as you gaze across the brilliant blue waters, feeling no shame as you lick the butter off your fingers.

Return your rental car to the airport in Boston for your flight home, unless you’d like to continue exploring the sandy dunes of the East Coast and all the adventure that awaits you there.

Arrive at Logan International Airport and transfer independently to your hotel. Depending on your time of arrival you might be able to explore the city or simply start off with a stroll around the beautiful public gardens and plan, in a relaxed space, what you plan to discover the next day.

Although many visitors know about Boston's rich history and its role in the Revolutionary War, they may not be aware of the city's world-class museums, numerous universities, and abundant shopping opportunities. Begin your exploration of the city on The Freedom Trail, including the famous Old North Church and the Paul Revere House. Spend time with the Museum of Fine Arts' extensive collection or the eye-opening exhibits at the Museum of Science. For a more intimate experience, visit the Isabella Stewart Gardner Museum or the Nichols House Museum. Walk across the Charles River on the Longfellow Bridge or take the "T" (subway) to Cambridge to explore the ivy-trimmed campus of Harvard University and nearby cafes and bookstores. Shoppers will enjoy areas such as Newbury Street in the Back Bay (high-end boutiques in restored brownstone houses), Copley Place (a two-level mall with top brand-name stores) and the famous Faneuil Hall Marketplace (100-plus shops and pushcarts as well as 50 restaurants, pubs, and food vendors). Sports fans should plan to watch a Boston Red Sox baseball game (April through October) and take a tour of Fenway Park, the oldest Major League Baseball Park in the country. If the weather is nice, stroll through the Boston Common and take a ride on one of the famous Swan Boats in the Public Garden.

Leaving Boston, you drive north and encounter almost four centuries of history along the way, as well as some of the coast's finest beaches and seascapes. Your first stop is Salem, the location of the infamous witch trials before continuing along the coast to the charming harbour towns of Gloucester and Rockport. Enjoy the old-time seaport atmosphere of Portsmouth, New Hampshire, and its wealth of historic buildings before crossing into Maine. Pass through Kennebunkport, summer home to Presidents, and enjoy exploring Portland, Maine's largest city.

Your drive today takes you inland towards the spectacular scenery of the White mountains, the ‘rooftop of New England’, a landscape dotted with historic villages and enchanting covered bridges. Delight in the breathtaking views of mountain ranges and pristine forests as you drive along.

Today, traverse the gorgeous White Mountains that divide the New England states of New Hampshire and Vermont, home to bears, moose, wild turkey, and deer. This route takes you through some of New England's most captivating scenery. Drive by Lyndonville and see Willey's General Store in Greensboro before continuing through Craftsbury, a Grandma Moses kind of village, and on to Stowe with its picture-perfect villages and famous covered bridges.

After leaving Stowe, you travel alongside the Green Mountains of Vermont, part of the Appalachian Mountain range that stretches from Quebec in the north to Alabama in the south, and right through the Connecticut River Valley. As you step into Old Sturbridge Village you find yourself transported back in time. In historic households and shops, at water-powered mills and on working farms, you can admire the everyday tasks and seasonal celebrations of early 19th-century New England.

Today’s journey takes you south towards the Massachusetts coast. Many of America's most prominent families - from the Astors to the Vanderbilts – spent their summers in Newport. Many of their homes are now preserved and open for tours. As you continue along the coast you reach magnificent Cape Cod with its high cliffs, rolling dunes, broad beaches, miles of walking trails, enchanting villages, and delicious seafood. This world-famous peninsula is a popular vacation spot for visitors and locals alike.

In the morning drive back to Boston, but first stop in Plymouth, a living panorama of Pilgrim and Colonial times and admire the replica of the Mayflower II, celebrated for transporting the Pilgrims to the New World in 1620. Make your way to Boston’s Logan International Airport for your flight home unless you plan to extend your stay in New England