MODERATE | ESCORTED COACH TOUR: Cross the United States and compare the excitement and glamour of Manhattan in the East with that of Hollywood in the West. The places you see in between could be on most bucket lists with Niagara Falls, Yellowstone, the Grand and Bryce Canyon delivering the dramatic landscapes, while after a visit to Mount Rushmore you follow the trail of the Bison into Montana. History is well served with visits to Philadelphia, Washington, and Gettysburg. Then there’s Chicago, parts of Route 66 and the glitter of Las Vegas. 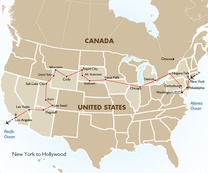 This 17-day trip takes you from east to west coast on a tour of America’s natural, cultural, and historic marvels, giving you an urban start in the boroughs of New York City and exploring the streets of Philadelphia, Washington, Niagara Falls, Detroit, and Chicago. From there, you’ll embark to America’s wild frontiers through national parks and outdoor landmarks of the Badlands, Mount Rushmore, Yellowstone, Grand Teton Mountains, Grand Canyon, the Mojave Desert, and coming to an end in the star-studded capital of Los Angeles.

Learn about the origins of all 50 states in Philadelphia as you set your sights on the Liberty Bell and Independence National Historical Park in the city where the founding fathers once gathered. The capital of Washington will throw you into the heart of modern day American history, where you’ll enjoy a city tour of the US Capitol Building, Washington Monument, Lincoln Memorial, and the White House. Museums of historical and artistic nature abound here, paving the way for a visit to Gettysburg National Military Park.

Moving north, you’ll cross the Canadian border where the mist of the Niagara Falls will take over your senses. Feel the roar of the falls in your ears as you explore this natural wonder, which will make for an interesting contrast against the sounds of Motor City USA, also known as Detroit. Here you’ll visit the Henry Ford Museum and the nearby Ford plant, understanding where the city’s reputation comes from. Set your sights towards Lake Michigan, stretching as far as the eye can see as you move around its shores towards Chicago.

The bustling centre and cultural hubs of The Windy City will impress you with its modern high-rise architecture that towers over Navy Pier, boasting one of the world’s tallest buildings. Urban sights will fade away as you travel through Midwestern farm country, where corn fields and dairy farms meet the eye.

In South Dakota, you’ll marvel at the rocky peaks and prairies of Badlands National Park. The alien-like landscapes of the Black Hills, nearly inexplicably created by wind and water, will stun you as you gaze off into the distance coloured in red, brown, green, and gold hues. Come face-to-face with America’s least natural but most famous rock formations at Mount Rushmore, snapping a selfie alongside four of the country’s great presidents.

Wyoming will give way to mountainous terrain, as home to Yellowstone, America’s first National Park. Yellowstone is a wet wonderland of bubbling hot springs, exploding geysers, and glacial lakes set against the backdrops of snowy peaks and bison herds that graze in its green pastures. Neighbouring Grand Teton National Park will give you no shortage of sweeping views either, such as the panorama from the iconic Snake River Outlook.

Cross the border into Utah where you’ll explore Salt Lake City, one of the country’s best-planned centres. Afterwards, you’ll explore the martian-like natural red amphitheatres of Bryce Canyon, shelved in unique geological shapes due to thousand year old erosion. Warm canyon walls make a stunning contrast against the crystalline blues of Lake Powell, one of America’s largest man-made lakes. Follow the desert into the dizzying drops of the Grand Canyon, with its extinct volcanoes and red rising spires.

The freedom of the open road awaits you on historic Route 66, bringing you to Seligman, a town that gives you a healthy dose of nostalgic Americana. The icons keep coming as you roll into the dazzling lights of Las Vegas, where you can take in the sights and sounds along its famous Strip.

Travel through clusters of unique Joshua trees on the road through the Mojave Desert, as the sun beckons you to Los Angeles. Once there, go on a stargazing tour of Hollywood, the Sunset Strip, and Beverly Hills as you discover all the glitz and glamour the City of Angels has to offer. The next day, transfer independently to the airport or continue exploring the Golden State and all its coastline has to offer.

Arrive in New York City and transfer independently to your hotel. Depending on your time of arrival, you might be able to explore a little bit of the Big Apple before you meet with your tour director and your fellow travellers for a briefing. Going to a Musical on Broadway, spending an evening in Times Square, walking over Brooklyn Bridge, enjoying some shopping in Fifth Avenue, or feeling like a broker in Wall Street are some of the things that can ONLY be done in New York City.

Depart New York for Philadelphia and spend the morning exploring the historic district of the City of Brotherly Love and the birthplace of a Nation. See the Liberty Bell, and stroll through Independence National Historic Park and Mall. From here your trip continues to the Nation's capital, Washington, DC.

Enjoy a city tour that features many highlights, such as the U.S. Capital Building, Washington Monument, Lincoln Memorial, the White House and Arlington National Cemetery, site of the JFK Memorial. Spend the remainder of the day exploring the city’s great museums such as the Smithsonian Institute or simply stroll along the banks of the Potomac River.Overnight Washington, DC

Your day starts off with a visit to Gettysburg National Military Park, site of one of the most decisive battles during the American Civil War, and the place where Abraham Lincoln gave his famous address in 1863. From here travel through upstate New York to Buffalo and finally cross the international border into Canada, where the thundering noise and mist of Niagara Falls are waiting to dazzle you.

Spend the morning sightseeing at Niagara Falls. Stroll along Table Rock and view the thundering waters of Horseshoe Falls. In the late afternoon, you cross the border again and returning to the United States and continue to your hotel in a suburb of Detroit. Enjoy your evening at leisure in Detroit also known as ‘Motor City USA’.

This morning starts with a visit to the Rouge Factory followed by the Henry Ford Museum. After time exploring the many exhibits of the museum, next is the nearby Ford plant to watch a modern production vehicle roll off the always busy factory floor. Leaving the Motor City behind you travel inland to the south of Lake Michigan to reach Chicago for our overnight stay.

Today enjoy a short tour of the city's highlights including Lake Shore Drive, the Magnificent Mile and Navy Pier. The Windy City's stunning high-rise architecture and the Willis Tower, one of the world's tallest buildings (admission not included), provide a dramatic backdrop for this cultural and financial center. The rest of the day is at leisure.

Travelling through the Midwest today, you traverse typical farm country abundant in corn fields, wheat fields and dairy farms. After approximately four hours you cross the mighty Mississippi River and enter the state of Iowa to arrive just as Lewis & Clark did 200 years ago on the banks of the Missouri River.

Today your journey continues westward through the grasslands of South Dakota and onwards to Badlands National Park, once home to large herds of buffalo and antelope, and filled with strangely shaped and colourful rock formations. Continue to the Black Hills, sacred to the Plains Indians and home to Mount Rushmore, an enormous monument to four great American presidents: George Washington, Thomas Jefferson, Abraham Lincoln, and Franklin Delano Roosevelt.

The marvellous vistas today included twelve mountain ranges, rolling grassland and desert landscapes as you enter the state of Wyoming and continue to Cody for the night. If overnight in Cody is not possible due to weather or adverse road conditions in Yellowstone, overnight will be in Billings/ Livingston, Montana.

Weather permitting, you travel through Grand Teton National Park and see awesome mountain peaks towering over 13,000 ft. (4,000 meters). Visit the Snake River Outlook and try your eye at capturing the stunning landscape made famous by Ansel Adam's iconic photograph. This prairie land is home to wild buffalo, called Tatanka by the Lakota, moose, and elk. Later, arrive in Utah, known for its Mormon Community, and take a short tour of its capital, Salt Lake City. The followers of Brigham Young built one of the best-planned cities in the country. See the State Capital building and visit famed Temple Square and the Tabernacle before arriving at the hotel for the evening. May we suggest dinner at the Rooftop Restaurant for panoramic views of Temple Square (optional).

Continue today to spectacular Bryce Canyon, where a tour through a multi-colored world of sandstone spires and pinnacles, "hoodoos", will dazzle the eye. This evening, weather permitting, be sure to gaze upon the spectacular night sky filled with sparkling stars & brilliant constellations.

Depart Bryce Canyon this morning and journey to stunning Lake Powell, where crystal blue water laps against towering red-rock canyon walls. Lake Powell is the second-largest manmade lake in America, and one in a series of lakes formed by the damming of the Colorado River. Afterwards, visit breathtaking Grand Canyon National Park, one of the seven great natural wonders of the world. Stop at the Canyon rim to fully experience this mile-deep canyon's plunging gorges, rising spires, extinct volcanoes, and below the rim, the winding Colorado River.

Leaving Flagstaff, a famed stop on Historic Route 66, your trip continues through Seligman, a town also built along Route 66 that looks as if it were frozen in time sixty years ago. From here you travel to Las Vegas, the dazzling ‘Entertainment Capital of the World’. The remainder of the day is at leisure for you to explore the famous Las Vegas Strip.

Travel to Los Angeles via the Mojave Desert, home of the world's tallest thermometer, at 134 feet (41 meters) high. Clusters of unique Joshua trees dot the mountainous landscape. Upon arrival in Los Angeles, you can enjoy a tour through the City of Angels including Hollywood, Sunset Strip, and parts of Beverly Hills.

Today you transfer independently to Los Angeles International Airport for your flight home unless you plan to extend your stay in the area.