MODERATE | ESCORTED COACH TOUR: A wonderful trip that moves you from New England to New France and, ultimately, New York. It’s intriguing history, mesmerizing landscapes, and amazing cities all the way. Québec City and Montréal are North America’s fabulous French gems, Niagara Falls does not only offer natural drama but was the site of a crucial battle in the War of 1812, while Gettysburg played a pivotal role in the American Civil War. Boston, Washington, and Philadelphia add historical weight and impressive iconic sights of their own, and New York still feels like the most exciting city in the World. 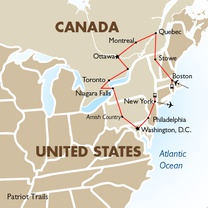 This 9-day trip gives you a taste of eastern sensibilities in America and Canada, following the steps of the American Revolution in New England, including a visit to its northern neighbours in picturesque Quebec City, Montreal, Ottawa, Toronto, and Niagara Falls. Top off this historic journey with a jaunt around the Capitol in Washington D.C and tour of the cultural monuments in Philadelphia alongside your fellow travellers.

The journey begins in Boston exploring the Freedom Trail and moves through the leafy rural states of Massachusetts, New Hampshire, and Vermont on your way to the Canadian border. The tree cover is particularly stunning in the fall with its red and gold patterns, but makes for lovely scenery year-round. Its forests do not skimp on maple trees, which you’ll discover at an authentic maple farm once over the border.

French-Canadian culture awaits you in Quebec City, whose French-style architecture and walled city centre designated it a UNESCO World Heritage Site. Heading east, try some poutine in Montreal after exploring its intricate cathedrals and Vieux Port area, one of Francophone Canada’s most famous dishes.

Moving into Anglophone Ontario, Canada’s bilingual capital of Ottawa is home to the country’s impressive parliament buildings and manicured gardens, making for a good sightseeing stop before carrying on to Toronto, one of the most multicultural cities in North America. International cuisine, the soaring heights of skyscrapers, and the CN Tower await you in Canada’s largest city, which you’ll enjoy before continuing along Lake Ontario to the Niagara Region. Allow your senses to be taken over by the thunder of the Niagara Falls and the Horseshoe Falls, with the option of taking a boat ride through its misty waters.

Travel back into the Land of the Free as you explore Amish Country through the rolling hills and farmlands of upstate New York, including a stop at Gettysburg Civil War National Battleground for an important history lesson. In Pennsylvania, you’ll be introduced to Dutch Country at the Amish Museum, feeling frozen in time as you explore the world of a people who are keeping old traditions alive in the modern day.

Patriotism is on full display in Washington D.C as you tour the nation’s capital, including stops at the Washington Monument, Lincoln Memorial, and the White House. Stroll the calm shores of the Potomac River or browse the collections of the Smithsonian Institute or many other museums in the area, leaving little to the imagination for history buffs. A tour of Philadelphia will capture America’s spirit for you with a stop at Independence Hall and the Liberty Bell, before transferring back to New York.

Your tour comes to an end in downtown Manhattan, where you’ll have the choice of continuing on to the airport or exploring the streets of the Big Apple for yourself with your new travel friends.

Arrive at Logan International Airport and transfer independently to your hotel. Depending on your time of arrival you might be able to explore the city or simply start off with a stroll around the beautiful public gardens. In the evening meet your tour leader at the hotel for a briefing.

Start your trip travelling through the rural New England states of New Hampshire and Vermont on your way to Canada. Pass through small, picturesque villages and the White Mountains, which are particularly beautiful during the fall foliage and cross the international border to enter the Canadian province of Québec. You might wish to visit an authentic maple farm and this evening, take the opportunity to sample a bit of celebrated French-Canadian cuisine (optional).

Begin the day with a tour of Québec City, the capital of the province and a UNESCO World Heritage Site. Highlights include the Québec Provincial Parliament Building and Citadelle. Afterwards, enjoy a walking tour of the walled city, and admire the famous Chateau de Frontenac, as well as unparalleled views over the St. Lawrence River. If time allows, we suggest a visit to Rue du Trésor, a quaint open-air gallery situated in a narrow, cobblestone alley before leaving for Montréal. Upon arrival, go on a tour of Old Montréal, the area known as the ‘Vieux Port,’ with stops at Place Jacques Cartier and Notre Dame Basilica.

Depart Montréal for the capital of Canada, Ottawa. This vibrant city of parks and flowers boasts one of the most impressive parliament buildings in the world. Continue to Ontario’s mesmerizing 1000 Island region, where you can join an optional excursion on the St. Lawrence River and explore the magnificent scenery on a relaxing cruise. Later in the afternoon, continue along the 1,000 Islands Parkway to the largest English-speaking city in Canada, Toronto, a bustling metropolis on the shore of Lake Ontario.

Begin the day with a drive through Toronto’s impressive collection of modern skyscrapers, most notably, the CN Tower, one of the world’s tallest free-standing structures (1,815 ft./553 m). Do you dare to stand on the glass floor located over three hundred meters above Toronto (optional)? Continue along Lake Ontario, crossing the Welland Canal, before arriving at Niagara Falls to take in the dramatic views of an exhilarating natural wonder. Stroll along Table Rock, see the unique Floral Clock and view the thundering water of the Horseshoe Falls. For the most intimate view of the Falls, you can take an optional tour on the renowned Hornblower Cruises boat ride at the base of the Falls.

Today ride through the rolling farmland of upstate New York, known as the Finger Lakes Region, and enter the Keystone State of Pennsylvania. This afternoon, visit the historic Gettysburg Civil War National Battleground, site of the largest battle ever fought on American soil, and the place where President Lincoln gave his famous address in 1863. Travel along the Susquehanna River to South Pennsylvania for your overnight.

Continue travelling through delightful rural countryside to Pennsylvania Dutch Country. Visit an Amish Museum and see their 300-year-old tradition of simple living (admission included). The Amish people live in a world that stopped in the mid1850s. They use no electricity, mechanical devices, or modern equipment. In the afternoon, continue to the nation’s capital, Washington, D.C.

Enjoy a tour of the National’s Capitol with such highlights as the Washington Monument, the Lincoln Memorial, the White House and Arlington National Cemetery, site of the JFK Memorial. Spend the remainder of the day exploring wonderful museums, such as the Smithsonian Institute or simply stroll along the banks of the Potomac River.

Transfer to New York via Philadelphia. It is the birthplace of a nation, and you need to see Independence Hall and the Liberty Bell. Your tour ends in midtown Manhattan upon arrival at our post-tour hotel at approximately 17:00 hours. Independently transfer to the airport for your departure flight, if leaving tonight, unless you plan to extend your stay in the city.