A Taste Of The Maritimes

FIRST-CLASS | SELF-DRIVE: Embark on a journey to experience the natural wonders, historic centers and fascinating cultures representing some of the oldest communities in the country. See vibrant Halifax, the commercial center of the Maritimes and follow the lighthouse route to Digby, where you cross the Bay of Fundy into Saint John. Its charming streets reflect elements of its colonial past, while on PEI Charlottetown embodies the small city charm of the region. Finally, Baddeck serves as the hub from which to explore the stunning coastlines and primeval forests of the Cabot Trail. 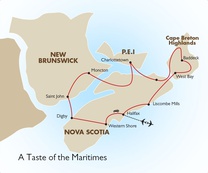 A TASTE OF THE MARITIMES

This is a 13-day journey that embraces the natural wonders, fascinating cultures and historic communities of Nova Scotia, New Brunswick and Prince Edward Island. You’ll also experience one of the world’s great drives.

Your trip begins in Halifax, one of the most beautiful and friendly cities in Canada. Stroll the boardwalk that lines the harbour, taking in views of pretty boats, boutique shops and restaurants. Famous Pier 21 is home to the Canadian Museum of Immigration and the Maritime Museum. Try a meal in the hip North End, and finish your night at a downtown pub.

The Citadel in Halifax, which dates back nearly 170 years, has marvellous tours and soldiers in costume. Several companies offer tours of the harbour. Or you can take a ferry over to trendy Dartmouth, where there are several funky, independent shops and restaurants

Take an easy drive from Halifax to Peggy’s Cove, a picturesque fishing village where waves of ocean water crash onto impressive mounds of bare granite. Just a little further down the coast is Lunenburg, a UNESCO World Heritage Site famous for its multi-coloured houses. It’s also home to the legendary Canadian ship, the Bluenose II. The next day you can explore Chester, Mahone Bay or the tiny fishing village of Blue Rocks, a photographer’s dream.

From the south shore you’ll go inland to explore the lakes and quiet walking trails of Kejimkujik National Park. Soak up views of the lush Annapolis Valley, famous for apples and excellent wine. Fort Anne is in the centre of Annapolis Royal and dates to the 1600’s. You’re only 45 minutes from the seaside town of Digby, famous for its fresh, juicy scallops.

Enjoy a ferry ride from Digby to Saint John, New Brunswick. Take the afternoon to explore the downtown area and the Saint John City Market. The next day, check out some of the small museums or galleries in town.

The next day’s drive is filled with breathtaking scenic moments. The seaside village of Saint Martin is only a few minutes from Saint John and has two covered bridges. The highlight of the day is Hopewell Rocks, one of the most famous spots in Canada. Imposing towers of orange-red rock called flowerpots rise up from the sea bed. At low tide you can actually walk on the sea floor and admire the towers from below.

Swing by the handsome Point Prim Lighthouse on your way to catch the ferry to Nova Scotia. After your ferry ride, continue into Cape Breton Island and settle into Baddeck, a pretty village on Bras d’Or Lake. Don’t miss the Alexander Graham Bell museum, which explores the life of the inventor of the telephone

The Cabot Trail on northern Cape Breton Island is one of the great drives of the world, with a road that dips and swirls over steep hills. You’ll enjoy stunning views of sea-swept headlands, steep cliffs, and tranquil beaches.

Your last full day features a leisurely drive through Cape Breton and Nova Scotia. Stop for lunch or a coffee in Antigonish, home to Saint Francis Xavier University, then continue to Halifax.

Arrive at Halifax Stanfield International Airport and transfer independently to your downtown hotel. The Roadbook you received has all the information needed for your holiday/trip/journey. The remainder of your day is at leisure for exploring this bustling oceanside city. The city has a wonderful boardwalk, with lots of restaurants, bars, shops, and boutiques. Famous Pier 21 is home to the Canadian Museum of Immigration and the Maritime Museum, both worth a visit. Alternatively, enjoy dinner at one of several seafood restaurants or try the city’s interesting music scene in a downtown bar.

Halifax is located on one of the world’s largest natural harbors and bears all the hallmarks of both a modern and historic city. You can discover its proud maritime heritage in museums and along the waterfront area, which includes the restored Historic Properties. Independently visit the Citadel that has guarded the city since the 18th-century, the Public Gardens or even sail on a harbor cruise aboard the Bluenose II.

Drive along the Lighthouse Route to the fishing community of Peggy’s Cove. This picturesque fishing village is surrounded by bare granite and coastal barrens with trails leading to its famous lighthouse. Continue along the coast and stop in the port of Lunenburg, a UNESCO World Heritage Site, for a visit to the renowned Fisheries Museum of the Atlantic before arriving in Western Shore, its shoreline dotted with delightful seaside communities, including Chester and Mahone Bay.

Enjoy your day to fully appreciate the quaintness of Mahone Bay or see more of Lunenburg, it is less than fifteen minutes away. If you visit the Oak Island Municipal Museum you can find out how this small island is rumored to have been a site of buried treasures for centuries.

Take the scenic, cross-country drive linking the rocky south shore with the lush Annapolis Valley. Relish the amazing views as you traverse extensive woodlands dotted with lakes. Take time to explore the wilderness of Kejimkujik National Park along the centuries-old Mi’kmaq canoe routes or follow the hiking trails into its forested heartland. Time permitting, we suggest you drive to Annapolis Royal, rather than directly to Digby. It is an enthralling seaside town and home to Canada’s oldest National Historic Site. From here the drive to Digby is just 45 minutes, a worthwhile diversion.

Enjoy a ferry ride across the Bay of Fundy to Saint John, famous for the world’s largest tides. Arriving in In Saint John, check into your hotel and take the day to explore the downtown area. A vibrant, visitor friendly culture reverberates around this small town. Restaurant patios offer beautiful views and fresh ocean breezes to spend the day relaxing.

A second day at leisure in St. John to visit one of the small museums and galleries in town or take a trip to the famous Reversing Falls – a trick of the tide that reverses the water’s current. It can be interesting, but only if you happen to be there at the precise time of the water changing direction. Alternatively, Irving Nature Park is nearby the urban center, a delightful wooden park with groomed trails and fabulous views of the Fundy coastline.

Today’s drive is full of breathtaking scenic moments as you make your way towards Fundy National Park. We suggest leaving early to enjoy time in the park before you move on to Hopewell Rocks. Ideally, you want to see the over twenty free-standing sea stacks, also called flowerpots, at low and high tide. The transition takes six hours and tide times are posted on the web. Planned carefully, you can do it and still visit other places before or in between. At low tide you can walk the ocean floor and get up close to these stacks with names like Elephant, Dinosaur or ET. You might consider dinner in Shediac, the lobster capital of the world is just 21 minutes from Moncton where you are staying for the night.

Before leaving Moncton, we suggest a stop at Magnetic Hill. Put your car in neutral and experience the illusion of being pulled up hill by a magnetic force. The Northumberland coast of New Brunswick has a rich British and Acadian heritage, which is yours to discover if you choose to travel on the route that passes through the architectural gem of Dorchester and visit the French fort of Beausejour at the Nova Scotia provincial border. About half an hour later you arrive at the Confederation Bridge and cross into Prince Edward Island, Canada’s smallest province, where you arrive in the charming city of Charlottetown an hour later.

Today’s journey takes you past Orwell Corner Historic Site to board the ferry across the Northumberland Strait to Nova Scotia. Drive through tranquil scenery and small communities that continue to celebrate Nova Scotia’s Scottish, Indian and Acadian identities. Continue into Cape Breton Island through the magnificent highland scenery that surrounds Bras d’Or Lake, and drive to the delightful resort community of Baddeck. An excellent local museum is dedicated to the life and works of Alexander Graham Bell, the inventor of the telephone.

Driving the Cabot Trail into the highlands of northern Cape Breton is one of the absolute scenic highlights of this trip. The trail runs past lochs and glens settled by Scottish Highlanders and along breathtaking coastlines settled by Acadians. Meander through the rugged Cape Breton Highlands National Park, enjoying stunning views of sea-swept headlands, steep cliffs, and tranquil beaches. Hiking trails lead into the interior of the park where magnificent vistas appear at each turn. Return to Baddeck through the lush Margaree Valley.

A day of leisurely travel across the heart of Nova Scotia. You can stop for lunch in either the small town of Truro or Antigonish for a taste of peaceful Maritimes life. Continue to Halifax where you might visit places you did not see at the beginning of your trip or enjoy one last splendid seafood dinner.

Travel back to Halifax Stanfield International Airport for your flight home or stay in the city if you plan to extend your trip.