MODERATE | SELF DRIVE: From the captivating Bayou to glamorous Miami Beach and fabulous places in between, this is a great drive, that rarely veers off the coastline. New Orleans and Miami provide an exciting start and finish, with gorgeous beaches in Biloxi, Santa Rosa, Sanibel, and Naples dazzling you throughout the trip. If you’re into wildlife, there’s manatees in Crystal River and alligators in Everglades National Park. 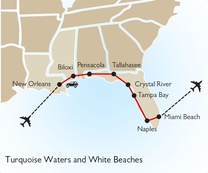 This 11-day beach lover’s vacation begins with the French flair of New Orleans, where ornate metal balconies and colourful homes, voodoo vibes and live music spills out from endless hot spots along the beating heart of Bourbon Street. Take a side trip to a famous plantation house or go gator spotting just outside the city and head back to hunt down Joan of Ark’s statue, get your cards read by a Voodoo believer and brace yourself with a Vieux Carré before tucking into some jambalaya or massive Mississippi oysters on a paddle steamer sunset cruise.

Follow the Gulf of Mexico to Biloxi, Mississippi. The Cueva' Indians made this beach-side spot their home long before the French settled here in 1699. Contemplate the passing of time on a sugar-white beach, deep-sea or freshwater fish, hit a few balls at a championship golf course, treat yourself to fresh seafood and take a gamble at a classy casino resort open all night.

Stop for photos along the Gulf Coast as you pass pristine wildlife preserves and natural habitats before arriving in Pensacola, Florida where the sky and the water converge over the sandy beaches of sublime Santa Rosa Island.

Venture inland to the Capital of Florida, Tallahassee, where one of the world’s largest and deepest freshwater springs at Wakulla Springs is the perfect place to spy alligators, deer and turtles in a glass-bottom riverboat tour. In Citrus County, Florida’s beautiful Nature Coast, the Crystal River is famous for its gentle manatees. From Kings Bay, watch wildlife above or below water or roam the streets of Crystal River and take in the historical landmarks of the city.

Head south along the Gulf and pass some of the world’s best beaches, like Clearwater or St. Pete and stop for souvenirs and sustenance at one of the beach towns in between. In Tampa Bay, explore part of the 400-mile open water estuary before heading to Ybor City for some sangria and sopas at Columbia Restaurant where Cuban delicacies have been served since 1905.

The soft, fluffy beaches and azure waters of Sanibel Island set the scene for the chill beach town of Naples. Stroll down the streets of and take in the historical landmarks of this Spanish city in between the trendy shops and galleries. Fancy clams and crabs or any other fresh seafood? You’ve found your foodie heaven.

Was that an alligator? Make your way to the rugged coast of Everglades National Park, known as “Alligator Alley” and count how many of these prehistoric creatures you can spy before living it up in the sexy city of Miami Beach, a jewel on the Atlantic Ocean. The bikini wearing roller-skaters, the outdoor lifestyle, the art deco architecture, the luxury boutiques of Lincoln Street, the beach side lounges with live music, it’s no wonder celebrities play in Miami Beach and so will you until your plane takes you home.

Arrive at Louis Armstrong New Orleans International Airport and transfer independently to your hotel. Depending on your time of arrival, you might be able to explore a little bit of the city on the bayou. The jazz and blues clubs are too numerous to mention, but you have two days in New Orleans which gives you plenty of time to check them out.

Keeping yourself busy and entertained is no problem in ‘The Big Easy’. The music scene is rich and varied, with jazz, blues and different flavours of Cajun music topping the list. Riverboats are a cool and delightful feature and boarding a paddle steamer for a dinner cruise on the mighty Mississippi River is well worth considering. Speaking of dinner, to indulge in a little bit of fantastic Creole cuisine is a must and the city’s fabled French Quarter is the perfect place for that.

New Orleans might be hard to leave, but the scenic route along the Gulf of Mexico to Biloxi is quite delightful. This is the laid-back, sandy side of Mississippi’s coastal region and Biloxi is one of the oldest communities in the country, having first been settled in 1699.  Enjoy the sugar-white sand beaches or optional activities such as great deep-sea or freshwater fishing, museums, and historic sites, tantalizing seafood restaurants, and the excitement of a 24-hour non-stop casino resort.

Continue your Mexican Gulf expedition as your journey takes you from Mississippi through Alabama and into Florida. You travel along the Gulf Coast through the untouched wildlife preserves and natural habitats that dot the landscape. Find serenity when arriving in Pensacola where blue skies meet the emerald-green water of the Gulf. Wander through Pensacola's Seville District or head to the beaches of Santa Rosa Island.

Today you venture inland to an area close to Florida’s capital Tallahassee. Here you can discover the home of one of the largest and deepest freshwater springs in the world along with its amazing wildlife. Wakulla Springs offers a glimpse of the Old Florida and bountiful opportunities to see alligators, deer, and turtles in their natural habitat. The park offers daily guided riverboat tours on a glass bottom boat allowing for amazing views of the incredible wildlife swimming below. Alternatively, you can try optional activities such as swimming, snorkeling bird watching, visiting a Historic lodge or just enjoy a picnic.

Time to leave the freshwater springs behind as you continue to admire the beautiful views along the Gulf Coast. Arriving in Citrus County you encounter the unspoiled splendor of Crystal River, the gem of Florida's beautiful Nature Coast. Crystal River is internationally recognized for its manatee-watching opportunities. The city makes the most of its great location on Kings Bay and offers many optional activities such as fishing, kayaking, diving, river touring and other wildlife watching. Alternatively, why not enjoy a stroll down the streets of Crystal River and discover the historical landmarks of the city.

Today continue your journey south along the Gulf driving along some of Florida’s most beautiful beaches, Clearwater Beach being one of its most captivating. Connected to Clearwater Beach are St. Pete Beach and many small beach towns in between. Once you reach the Tampa Bay area, enjoy the scenic view of the largest open water estuary in Florida, extending more than 400 miles. You may choose to make a stop in Ybor City, which was founded in the 1880s by cigar manufacturers, and boasts the Columbia Restaurant, the oldest in Florida, opened in 1905 and the largest Spanish restaurant in the world.

On your way to Naples, we recommend that you make a quick stop to visit the soft, white sandy beach and crystal blue waters of Sanibel Island. As you continue your drive south, you reach the beautiful beach town of Naples. Here you can enjoy the fine dining, designer shops and the relaxing atmosphere of a wonderful beach community. This is a great place to enjoy the beach, stroll through the historic town center with lots of shops and admire the Spanish architecture. Make sure to experience an exquisite Southwest Florida sunset before dinner.

A Floridian tip of the day ‘keep your fingers inside your car’ and prepare for a ride through the fascinating Everglades National Park, known as "Alligator Alley," due to its overwhelming number of freshwater alligators. The good thing on this single stretch of road is that it's very difficult to get lost. Your journey ends in fabulous Miami Beach where dazzling wide beaches and the Art Deco District of South Beach with its gorgeous pastel-coloured buildings welcome you. Along with its vibrant culinary scene and exhilarating nightlife, it's easy to see why some never leave. This is the place where celebrities from around the world come to play. Kick back on a patio cafe, lay on the beach or window shop the world-famous boutiques of the Lincoln Street corridor - this is the place to see and be seen.

After a long trip, today might be the perfect time to relax and partake in the beautiful Miami beach life. Rent an umbrella, beach chair, or grab some shade under a palm tree while enjoying the view of the ocean. Soak up the sun, enjoy the turquoise waters and white sand, strolling down the beach, and be sure to take a photo of the famous multi-colored South Beach lifeguard stands.

Return to Miami International Airport to check in for your return flight, or your hotel if you plan to extend your stay.