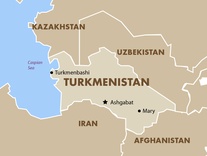 Turkmenistan is not your ordinary Asian destination. In the past, the country was an important stop along the Silk Road connecting China to Europe, but the past century saw Turkmenistan annexed by Russia, first as a part of the Russian Empire and then as a member state of the Soviet Union. The breakup of the USSR in 1991 brought little freedom to Turkmenistan as President Saparmurat Niyazov initiated a dictatorship, transforming the country into a cult of personality dictated by his own eccentricities. However, when Niyazov died in 2006, Turkmenistan began to open up to the rest of the world, reclaiming its Silk Road legacy.

The population of Turkmenistan is a little over five million, almost three-quarters of which are Turkmen, with Russians and Uzbeks constituting the significant minorities. Over 90 percent of the country is Muslim, and although religious minorities exist, Islam dominates the culture.

The country is large but dry and largely vacant. Over 80 percent of Turkmenistan lies within the Karakum Desert, the fourth largest desert in Asia and one of the driest deserts in the world. As such, the climate is dry all year round, warm in summer and mild in winter. However, despite consisting mostly of desert, beachside idylls do exist on the east side of the country, which sits on the Caspian Sea.

Turkmenistan’s capital, Ashgabat sits in the south just across the border from Iran. This city of over 800,000 boasts the highest number of marble buildings on the planet and the kind of gold domes and gorgeous parks more reminiscent of exotic fantasy than Central Asian reality. Simply put, it’s a city one never forgets, once visited. In 1948, a magnitude nine earthquake destroyed Ashgabat and killed more than 100,000 people. The Soviets rebuilt the city in their own utilitarian concrete style, so it wasn’t until after the Soviet collapsed that opulent modern buildings started sprouting up, giving the city the eccentric mix it showcases today.

While Ashgabat gives you a taste of the ever-changing present, most of Turkmenistan’s popular destinations draw on its past and the legacy of the Silk Road.

The Ancient Cities of Nisa and Merv

Nearby Ashgabat is Nisa, once the capital of the Parthian Empire and an important excavation site. The ancient city of Merv further to the east used to stand alongside Baghdad and Cairo as one of the epicentres of Islamic culture. Experts even believe it was briefly the largest city in the world during the 12th century, when it was a key stop on the trade routes between the East and West. Today, Merv is a series of ruins and a UNESCO World Heritage Site. A knowledgeable guide and personal transportation are a must when visiting Merv, as its sights are hard to decipher and relatively spread out.

As Turkmenistan has the fourth-largest natural gas reserves in the world, the country has enjoyed an economic boom in the past 20 years, using fossil fuel revenue to rapidly expand its urban centres and modernize at breakneck speed. One of Turkmenistan’s natural gas fields located in Darvaza collapsed and was set on fire by the Soviets in 1971to prevent methane gas leakage. The Darvaza Gas Crater, commonly referred to as the Gates of Hell or Doors to Hell, was expected to burn only for a few weeks, yet is still burning today, almost 50 years later. The fiery crater is located 260km (161 miles) from Ashgabat. Best viewed at night, this pit of glowing flame is both fascinating and captivating.

Culture, Customs, and Other Travel Tips

You’ll notice when visiting Turkmenistan that the country has many particular customs and flourishes. While Saparmurat Niyazov is dead and gone, the country retains many holdovers from his rules, such as certain months named after his family members and key events of his life. Some of the rotating statues of Niyazov have been removed from Ashgabat in recent years, but many of his garish monuments remain.

While travelling in the country is relatively safe, Turkmenistan is still off the beaten path and some of its customs can be surprising to even the most seasoned globetrotters. Smoking is banned in all public places as a security measure to combat fires caused by the dry climate. It’s also best to avoid discussing the country’s autocratic government or large police presence while visiting. Steering clear of politics is a good way to ingratiate yourself to the surprisingly hospitable Turkmen people.

It’s necessary to get a travel visa to Turkmenistan prior to visiting so as to avoid any possible delays. There are also registration fees to be paid upon arrival and you will have to retain your departure card throughout your trip, surrendering it when you leave the country. Ashgabat is accessible by air from most major cities in Asia and the Middle East and increasingly, a few European destinations as well.