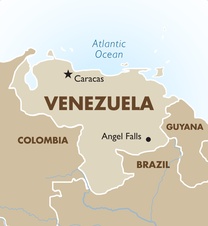 Venezuela is divided into four geographical regions. These are the Andes in the west, the Orinoco Basin in the east, the Caribbean Sea in the north and the Amazon Rainforest in the south. This diversity allows for more than 1400 species of birds and over 25,000 species of orchids to exist in the 40-plus national parks.

What are the best places to visit in Venezuela?

Caracas is the capital of Venezuela, situated on the Caribbean Sea. It is one of the most cosmopolitan and modern cities in South America. It has everything from some of the highest buildings in Latin America to a colonial and historic centre located around the Plaza Bolíva, the place where the city was founded. It is the cultural hub of the old town. In the plaza are statues of four women who represent the states of Venezuela, Ecuador, Peru, and Colombia. An equestrian statue of national hero Bolívar is also located in the plaza. If interested in this hero, consider visiting the Simon Bolivar Mausoleum. The Panteon Nacional, was formerly a church and is the burial place for prominent Venezuelans from the 1800s. You can see the ceremonial changing of the guard, well worth the visit. The central nave is dedicated to Simon Bolívar, the Venezuelan who was instrumental in bringing independence to not only Venezuela but other Latin American countries. With its original facade dating from the middle of the 17th century, the impressive Caracas Cathedral dates back to the 17th Century. The main altar is gilded with more than 140 kilos/300 pounds of gold leaf. The nearby Museo Sacro de Caracas has displays of religious statues, paintings, furniture, and colonial costumes, La Casa Amarilla de Caracas (the Yellow House) was the city’s prison in the 1600s after which it became the official residence of some of Venezuela’s presidents. Something different to do is to take the metro cable. This gondola lift provides an excellent way to see Caracas from the top of a hill.

Angel Falls is located in the south of the country in the Canaima National Park. This park is surrounded by tabletop mountains and has many different species of wildlife. Angel Falls was named after a US pilot, Jimmy Angel who discovered the falls, first by flying over them and on a separate occasion, crash-landing there. They are the world’s highest waterfalls and can be seen by flying over them, taking a canoe trip, or taking a trek and camping.

Los Roques Archipelago National Park is located around 130 kilometres/80 miles north of Venezuela in the Caribbean Sea made up of a chain of islands and coral reefs. It has some excellent white sand beaches which are quiet and mostly deserted. The park has some excellent facilities for diving, snorkelling, and surfing.

The Orinoco Delta is a labyrinth of waterways coursing their way through the jungle and a good area to see the locals, their culture, and their way of life. Almost the whole of the Orinoco River lies within Venezuela. It is the world’s largest area of rainforest. The central area of the Orinoco Delta is the home of around 20,000 Warao people who dwell in the rainforest where the river begins. They have remained in seclusion for centuries surviving the arrival of the Europeans. The Warao's name means 'boat people' as they skilfully make canoes. On a Venezuela vacation, you can take tours from Caracas and spend time in the Orinoco Basin, not only visiting a Warao village but exploring the Delta. There are lodges in the Orinoco Delta and you can also stay at a  locally-owned guest house on the edge of a large Warao village.

From its sugared beaches in the north to its snow-capped Andean peaks in the west, Venezuela is a country amply blessed with natural gifts. Book your Venezuela vacation today and start exploring.

When is the best time to visit Venezuela?

The weather in Venezuela depends a lot on how elevated the destination is. Lowland regions have a tropical climate compared to mountainous regions which have much cooler temperatures. In the highest mountainous regions, believe it or not, snow can be found on the peaks. Seasons in Venezuela are geared more to the amount of rainfall than variations in temperature. Most of the rain happens between May and December but it comes in short sharp showers.