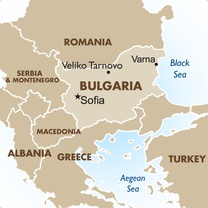 Bulgaria is tucked away in the southeast corner of Europe and is divided by the Balkan Mountains which cut through the middle of the country. It also has 220 kilometres/355 miles of coastline along the Black Sea. A large part of the country is forested. There are 3 national parks, 11 nature parks and 17 biosphere reserves. The country has a long history and was for 5 centuries, a part of the Ottoman Empire until liberated by Russia. Bulgaria became a democratic constitution in 1991. It is known for its wine production and is a large exporter. Its cuisine which should be tried on a Bulgaria vacation is heavily influenced by both Turkey and Greece.

First of all, Bulgaria is very inexpensive. Your dollar will go a long way here. Certainly known for its excellent Black Sea beach resorts, they can be combined with other attractions in the cities and the countryside. The major cities of Sofia, Plovdiv, Varna and Veliko Turnovo all have their own individual charm and attractions. One thing Bulgaria has is an abundance of mountains, some with their rocky, pointed summits with hundreds of blue glacial lakes; others with stunning waterfalls and sunny meadows, lush forests and fascinating trails. The Bulgarian mountains offer some of the best hiking routes in Europe. Another aspect of Bulgaria is the number of monasteries, the most interesting probably being the Rila Monastery in the Rila Mountains.

Bulgaria is rated 3rd in Europe for its quantity of important cultural-historical monuments. It is a destination with numerous important historical sites from early European civilization to modern times. You can explore thousands of preserved architectural landmarks from Thracian, Greek, Roman, Byzantine, Medieval Bulgarian and Ottoman civilizations across the country. Bulgarians are very proud of their heritage and folklore still forms an important part of their lives where legends and traditions are passed on from generation to generation.

What are the best cities to visit in Bulgaria?

Sofia is a cosmopolitan city with tree-lined boulevards and pleasant parks plus many interesting churches and cathedrals. Its architecture includes a range of styles from the Roman, Medieval and Soviet eras. The Aleksander Nevsky Cathedral is a major landmark and one of the most visited and outstanding buildings architecturally on a Bulgaria vacation and is one of the largest Eastern Orthodox cathedrals in the world. The interior is decorated with Italian marble, murals, chandeliers and thrones. Another interesting building is the National Palace of Culture. It is Europe’s largest conference centre and is used for events ranging from art exhibitions to musical concerts. It is also home to over 80 monumental works of art including paintings, sculptures, mosaics, murals, wood carvings and metal works, created by leading Bulgarian artists in the second half of the 20th Century.

The Museum Of Socialist Art is another venue where you can see the artwork, this time created during Bulgaria’s socialist period by notable painters and sculptors. Most of the exhibits on display are of trials of the partisan and resistance movement during World War II. The  Sveti Georgi Rotunda is considered the oldest building in Sofia and is the remains of the ancient town of Serdica, built in the 4th century by the Romans. It is also famous for its mediaeval frescoes inside the dome only uncovered and restored in the 20th Century. The National Art Gallery contains around 42,000 Bulgarian and foreign artists’ works of art for visitors on a Bulgaria vacation to enjoy. The gallery houses the country's largest collection of mediaeval paintings, including more than 4,000 icons.

Plovdiv is known as Europe’s oldest continuously inhabited city and is full of colourful 19th Century mansions that are now museums, galleries and guesthouses. It is known as a cultural city due to its having been the European Capital of Culture. The city draws many visitors to its music and art festivals on Bulgaria tours. The Roman Amphitheatre built in the 2nd Century AD but not discovered until 1972, hosts large-scale events and concerts. The Hindlian House, once owned by a merchant, has an amazing collection of period furniture in relatively good condition. The main street of Plovdiv is wide and pedestrianized, lined with cafes and shops. The Philipopolis Art Gallery is Bulgaria’s first private art gallery and contains works by 19th and 20th-century Bulgarian artists. The Archaeological Museum in Plovdiv has over 60,000 items in its collection including Thracian and Roman Pottery and jewellery, icons and ecclesiastical artifacts.

Veliko Tarnovo is a town rich in history and traditions. Once the capital of Bulgaria, it is now a quiet small town with a beautiful castle and monasteries worth exploring. It has the second-largest university in Bulgaria. The attractions are the cobblestone streets and the fortified walls, the views from the castle and Samovodska Charshia, the best-known street in the town with a large number of antique shops and local craft shops. Tsarevets Fortress, which dominates the skyline, is medieval dating from 1185 to 1393. It is considered one of the most popular attractions in Bulgaria and the highlight of a visit here. It has the remains of more than 400 houses, 18 churches, a royal palace and an execution rock.

Great sights of interest in Bulgaria

The Rila Monastery is Bulgaria’s most famous monastery and is regarded as one of Bulgaria's most important cultural, historical and architectural monuments. The monastery’s fortress-like complex is very large. Within its stone walls, you will find colourful architecture and religious art. The most important thing in the church is the icons carved out of wood. There are also wall paintings done by Bulgarian artists. The Belogradchik Rocks are enormous sandstone and limestone rock formations which cover a large area and reach a height of 200 metres/650 feet. They were sculpted over millions of years. The rocks are located on the slopes of the Balkan Mountains near the town of Belogradchik in northwest Bulgaria and vary in colour from red to yellow. They are often named for people or objects such as Adam and Eve, the Mushrooms, the Schoolgirl, the Bear, the Dervish, the Shepherd Boy, the Lion, the Camel, the Madonna and the Horseman.

The Museum of Wood-Carving in Tryavna was the place where the Tryavna Artistic School, the oldest in Bulgaria, was set up. It originated at the end of the 17th Century and developed icon painting and wood-carving. It’s the only museum devoted to wood carving. Almost the entire interior of the typical Tryavna house was decorated with wood carvings including furniture, ceilings, doors, columns etc

For more information on things to do in Bulgaria, click here

Bulgaria's long Black Sea attracts not only Bulgarians but people from across Europe and beyond on a Bulgaria vacation. The big, purpose-built resorts here have become serious rivals to those of Spain and Greece. Varna is the third-largest city in Bulgaria and during the summer, is a major beach destination. It is commonly known as “The Sea Capital of Bulgaria”. It is replete with restaurants, bars, clubs and nightlife. Besides the beach, you can spend time on cultural pursuits at the Museum of History, the Ethnographic Museum and the Museum of the Revolution plus several other museums. Primorski Park stretches for 8 kilometres/5 miles with several cafes, an aquarium and a summer theatre. Pobiti Kamani, also known as the Stone Forest is about 16 kilometres/10 miles from Varna where there are several large caves that used to be grottos which can be explored.

Burgas is Varna’s rival resort and the second-largest city on the Bulgarian Black Sea coast. It is a lively, well-kept city with a neat, pedestrianized centre, a long, uncrowded beach, an attractive seafront park and some interesting museums such as the Archaeological Museum, the Natural History Museum and the Ethnographic Museum.

What about the food in Bulgaria?

Bulgarian food is fresh and very tasty, famous for its quality vegetables and dairy products and its variety of mild spices. Pork and chicken tend to be the most common forms of meat, though fish and veal dishes are also popular and lamb has a special traditional place in Bulgarian cooking. And of course, no visit would be complete without tasting the world-famous Bulgarian wines.

When is the best time to visit Bulgaria?

Bulgaria has a continental climate with hot, dry summers and, especially in the interior, cold winters. The peak season for tourism is definitely the summer between June and August when the days are longest and the temperatures hot and the weather dry though June tends to be the rainiest month of the year. September can also have good weather after which, from October, temperatures drop considerably. April and May are good months for mild weather, especially along the Black Sea Coast. In the summer, the coastal resorts are very crowded.

Air, rail and road transportation are all well-developed in Bulgaria. The country has four international airports – Sofia, Varna, Plovdiv and Burgas. The Bulgarian State Railways links the most sizeable towns and cities. Journey times on Bulgaria vacations are usually slower than on buses. On the plus side, the scenery is likely to be more rewarding. Two of the most spectacular train trips are along Iskâr Gorge, from Sofia to Mezdra, and on the narrow-gauge track between Septemvri and Bansko. Railway buffs often go on these trips for no other reason than the journey itself.

Extend your Stay throughout Europe

Consider an additional stopover to your Bulgaria vacation at one of Goway's other European destinations. You can choose from a Paris vacation, a London vacation or an Amsterdam vacation. This can be done stopping over en route to or from Bulgaria.