Our Croatia Vacations and Tours

Croatia is relatively new as a worldwide tourist destination which is surprising considering the attraction of its spectacular coastal scenery and its long and interesting history, perfect for a Croatia vacation. It is situated on the east side of the Adriatic Sea to the east of Italy and borders Slovenia to the north-west, Hungary to the north, Bosnia and Herzegovina to the south-east, Serbia in the east and Montenegro to the south. It was part of original Yugoslavia. Tourism accounts for up to 20% of Croatian GDP. The bulk of the tourist industry is concentrated along the Adriatic Sea coast. It is ranked as the 18th most popular tourist destination in the world.

Northern Croatia has a temperate continental climate whereas the central and upland regions have a mountainous climate. The entire Adriatic coast has a pleasant Mediterranean climate, perfect for a Croatia vacation. Spring and Fall are mild along the coast.

Croatia is a land with a rich cultural heritage which is certainly discovered in the numerous museums, galleries and churches, but also, where even the shortest stroll becomes a journey through thousands of years of history which has been, at times, turbulent and exciting. On a Croatia vacation, whether walking through narrow white stone streets and alleys or climbing the green slopes of Central Croatia to the fairy-like fortresses and castles, each step is an ever-new experience. Croatia is also a land of urban culture which numbers more cities than any other part of the Mediterranean. 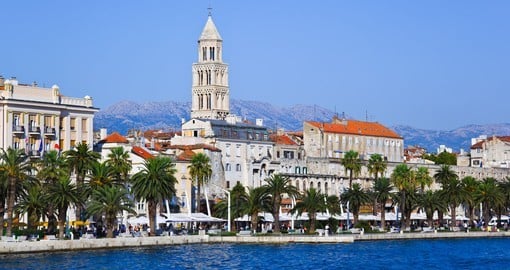 Because of its geographic position, Croatia represents a blend of four different cultural spheres. It has been influenced by both western and eastern cultures. There are, in total, seven UNESCO world heritage sites.

Croatian traditional cuisine varies from one region to another. Dalmatia and Istria draw upon Italian and other Mediterranean cuisines which feature various seafood, cooked vegetables and pasta dishes as well as condiments such as olive oil and garlic. The continental cuisine is heavily influenced by Hungarian, Austrian and Turkish cuisine which includes meats, freshwater fish and vegetable dishes. There are three distinct wine-producing regions in Croatia. The continental region in the northeast of the country, especially Slavonia is capable of producing premium wines, particularly whites. Along the north coast, Istrian and Krk wines are similar to those produced in neighbouring Italy, while further south, in Dalmatia, Mediterranean-style red wines are the norm. 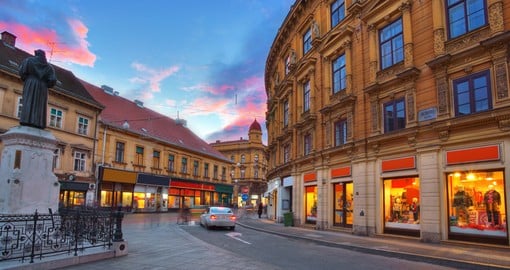 Top places to visit on a Croatia Trip

Zagreb, the capital, is a vibrant city. It has a charming medieval' old city with architecture and cobbled streets reminiscent of Vienna, Budapest, Prague and other Central-European capitals. Although not on the coast, Zagreb is well worth spending time in. It offers visitors pleasant walks through its many parks and pedestrian-only areas. The centre has two interesting parts. There is Upper Town, as it is known, which is a historical area dating back 1,000 years with charming medieval buildings, cobblestone streets, and baroque churches. Lower Town is where you will find shops, restaurants, cafes and bars plus an antique market and fruit and vegetable market held daily here. In the city, there are many interesting museums and art galleries. One of my favourites is the Museum of Broken Relationships which is dedicated to romantic liaisons that have failed – exhibited through letters, memorabilia, and photographs – all submitted by jilted lovers around the world. Another favourite place of mine is Strossmayer’s Walkway in Upper Town, where you have great views of the city below and it is where, in the summer, you will find painters, musicians, and other artists offering performances and concerts.

Dubrovnik, probably the best-known tourist centre in Croatia, is a stunningly intact walled city on the Adriatic Sea coast in the extreme south of the country and is listed as a UNESCO World Heritage Site. It is a seaport and is nicknamed "Pearl of the Adriatic". Dubrovnik was one of the centres of the development of the Croatian language and literature, home to many notable poets, playwrights, painters, mathematicians, physicists and other scholars. Today, on a Croatia vacation package, it is one of the most beautiful towns in the Mediterranean. George Bernard Shaw once said that "those who seek paradise on Earth should come to Dubrovnik and find it.'' Royalty, presidents and diplomats have all favoured the city. Dubrovnik is steeped in stunning architecture and sculptural detail and boasts spectacular churches, monasteries and museums.

Split is the second largest city in Croatia and the largest city on the Adriatic coast. It is dominated by the enormous Diocletian’s Palace complex, the most important sight in Split. In 295 AD, Roman Emperor Diocletian ordered this to be built as a residence for his retirement. Today, these ruins are some of the most valuable surviving buildings of the Roman era on the Adriatic coast, and the largest Roman palace ever built. The ancient palace/fortress is now what I would describe as a city within a city – with numerous shops, cafes, restaurants, and also apartments located in the old buildings on the narrow streets. The centre of activity is the main square called the Peristyle. In the palace are antiques which include three 3500-year-old sphinxes brought to Split from Egypt for the Emperor. Although primarily not a beach resort, there are beaches in Split. Most of them are southeast of Split’s harbour. Bacvice Beach is at the beginning of a 10-kilometre/6-mile stretch of coastline, offering a large selection of beach resorts.

Zadar is the perfect alternative to Dubrovnik, the oldest continuously inhabited city in Croatia. Although smaller in size and situated on a peninsula, it has many attractions which include a historic old town with Roman ruins, medieval churches, cosmopolitan cafes, and quality museums and art galleries. While on your Croatia vacation, you will find that it is not overrun with tourists. The numerous Roman sites include the forum, built in the 3rd century AD, a temple, and an amphitheatre. Zadar boasts two unique attractions. One is the Sea Organ, a series of stairs below which are a set of organ pipes which play music. The sound is created by the air pushed up by the sea, described by someone as “an endless concert of mystic harmonies by the ‘Orchestra of Nature’.” The other is the Greeting to the Sun, which consists of 300 multi-layered glass plates on the waterfront in the shape of a 22-metre-in-diameter circle. They produce an amazing and impressive show of light.

Although not on the coast, a deviation from this natural inland wonderland would be rewarding. It is a 2-hour bus ride from Zagreb or Zadar. Within the boundaries of this heavily forested national park, a UNESCO World Heritage Site, are 16 terraced lakes which literally tumble into one another via a series of waterfalls and cascades. The lakes are renowned for their distinctive colours, ranging from azure to green, grey, and blue. There are boardwalk trails, caves, boats for hire, and wildlife which includes deer, wolves, brown bears, wildcats, lynx, wild boar, voles, otters, and more than 160 different species of birds.

Istria is the largest peninsula in the Adriatic Sea located at the head of the Adriatic between the Gulf of Trieste and the Bay of Kvarner. It is shared by three countries: Croatia, Slovenia, and Italy. The Italian influence is fairly dominant. On a Croatia vacation package, the major resort in Porec with good beaches. Inland is Pula with its interesting Roman amphitheatre.

The Kvarner Gulf is a bay in the northern Adriatic Sea located between the Istrian Peninsula and the northern mainland. It includes the seaport city of Rijeka and the resort of Opatija, a popular summer and winter resort surrounded by beautiful woods of bay laurel. The whole coast to the north and south of Opatija is rocky and picturesque and contains several smaller winter resorts.

Hvar has earned the reputation as the country’s premier party town if considering a Croatia vacation. During the tourist season, the port is filled with large yachts, while the all-night discotheques attract young visitors. But that’s not all that is attractive about Hvar. It is often called “The Island of Lavender.” Hvar Town is surrounded by 13th Century walls inside of which are several beautiful Gothic palaces and pedestrian streets. You can enjoy the livelier aspects of Hvar certainly but you can also explore the sights as well as swim at one of the numerous beaches. Hvar is also one of the two most famous wine-making regions in Croatia, famous for both red and white wines.

Mljet is 37 kilometres/23 miles from Dubrovnik and is reached by ferry from there. Over 2/3 of the island is covered in forest and half of it is a national park. The rest is dotted with fields, vineyards, and small villages. Mljet has been described as an unspoilt oasis of tranquility, with its lush landscapes and pine forests. The island is considered to be one of the most beautiful of all Croatian islands. It is Croatia’s greenest island with a clear and clean blue sea and sandy shoreline. One major attraction on the island is Mljet National Park, which covers the western half and is very scenic with its two attractive saltwater lakes.

Korcula is an island which is generally reached by ferry from Split. Its beaches are some of the best you’ll find on your Croatia vacation. With a very long and varied coastline, Korcula offers a wide range of beaches, some rocky, some sandy and some just pebble. Historical, fortified Korcula Town is known as “Little Dubrovnik,” given its medieval squares, churches, and palaces. Many traditional activities take place on Korcula including traditional folk music and dancing.

So, on a Croatia vacation, the choice is yours.

The World of Ice and Fire: 10 Game of Thrones Filming Locations in Europe

Discover a New and Exciting European Destination With a Croatia Vacation

Make the Most of Your Adriatic Adventure in Sensational Croatia

See More on Your Europe Vacation with Our Back-Roads Experiences

At Goway we believe that a well-informed traveller is a safer traveller. With this in mind, we have compiled an easy-to-navigate travel information section dedicated to Croatia. vacation.

Learn about the history and culture of Croatia, the must-try food and drink, and what to pack in your suitcase. Read about Croatia's nature and wildlife, weather and geography, along with 'Country Quickfacts' compiled by our travel experts. Our globetrotting tips, as well as our visa and health information,  will help ensure you're properly prepared for a safe and enjoyable trip. The only way you could possibly learn more is by embarking on your journey and discovering Croatia for yourself. Start exploring… book one of our Croatia tours today!

Consider an additional stopover to your Croatia vacation at one of Goway's other European destinations. You can choose from a Paris vacation, a London vacation or an Amsterdam vacation. This can be done stopping over en route to or from Croatia.

DELUXE | TAILOR-MADE: Start in the capital, Zagreb, Croatia’s centre of culture, innovation, and opportunity. Next is Split which dates back to the Roman era, where you'll enjoy a visit to River Krka Waterfalls and Sibenik. Finally, visit Dubrovnik, taking your time exploring this renowned walled city, known for its old town, bars and restaurants.