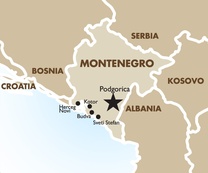 Montenegro is a small Balkan country located on the coast of the Adriatic Sea and a destination growing quickly in popularity with visitors worldwide. The attractions on Montenegro vacations are the beach resorts along a dramatically beautiful coastline of which 72 kilometres/45 miles consist of beaches, the culture and the history which can be found in many of the well-preserved ancient towns here and the natural beauty of inland Montenegro. Some of the most rugged mountains in Europe can be found here.

The Bay of Kotor which resembles a fjord is well-known for its World Heritage medieval structures including churches and fortifications and its stunning natural setting at the very edge of the mountain-rimmed Kotor Bay. It is probably one of the prettiest bays in the world. The stunning town of Kotor is a beautifully preserved fortified, medieval town with a long history. The old town of Kotor today is considered to be the best preserved medieval urban district in the Mediterranean. Wandering through its labyrinth of narrow and cobblestoned streets, you will come across lively squares, ancient churches and lots of pleasant bars and restaurants. On your Montenegro vacation, don't miss the 12th-century St. Tryphon Cathedral, the Church of St. Luke and the Orthodox St Nicholas Church. If you climb up the Upper Town Walls, they look a little like a short version of the Great Wall. Climbing up the 1350 steps will be rewarded by an excellent view of Kotor and the bay. There are many interesting old fortresses lying abandoned in the hills and mountains close to the Bay of Kotor.

Not far away, in Herceg Novi, an amazing old town. It is located on a fairly steep hill that leads all the way down to the sea. Wandering through the small stairways to the various plazas and fortresses is an adventure. The Kanli Kula Fortress dominating the old town doubles as an open-air theatre and is worth visiting mainly for the splendid views of the town and Kotor Bay. The Spanjola fortress, located higher up the mountain, dates back to the 16th century.

Sveti Stefan, a town on the Adriatic coast, previously a fishing village, with its tower, narrow streets, shops and small churches, remains unchanged. It is an unusual and unique place not only in Montenegro but in the whole of the Mediterranean. It stands on the cliff of a rocky island with amazingly red roofs. A sand isthmus connects it with the land.

Budva is the country's most popular tourist destination on Montenegro vacations and boasts some excellent beaches as well as a lovely, walled town centre which is picturesquely located on a rather small peninsula. Its narrow, winding lanes hide a multitude of historic buildings, churches and small squares. Among the most interesting monuments here is the 7th century St. John's Church, the 8th-century Santa Marija of Punta and the 12th-century Church of St. Sava. The medieval town fortress is referred to as Citadela.  Budva's over 30 kilometre/18 mile long Riviera has been called "The Riviera of Sandy Beaches" and is dotted with lovely hamlets and a wealth of historic monuments.

Perast is an old town on the coast with wonderful old architecture including many old churches. The biggest attraction is Our Lady of the Rock, a little island in Boka Bay with an amazing church and museum.

1 hour inland lies the capital, Podgorica, a mixture of the old and new and known for its café culture and nightlife. The Old Turkish Town with its narrow curved streets makes for an interesting stroll. Other landmarks are the 10th Century St. George’s Church and King Nikola’s Castle.

Cetinje is the historic capital of Montenegro located in a small valley under the Lovcen Mountain. The city is of enormous historical and spiritual value to the country. During the siege of the Ottoman Empire, Montenegro itself had, at numerous times, been reduced to just Cetinje and its surroundings. The Cetinje Monastery is the most famous Serbian Orthodox monastery in Montenegro.

The Durmitor National Park offers limestone peaks, glacial lakes, wildlife such as bears and wolves and the 1300 metre/4225 feet deep splendid Tara River Canyon. From December to March, Durmitor is a major ski resort, on Montenegro vacations while in summer it is a popular place for hiking, rafting and other active pursuits. The Tara River Canyon is the second longest canyon in the world and a UNESCO World Heritage Site. It boasts rich flora and fauna as well as snow-covered high peaks.

Lake Skadar is a vast freshwater lake, two-thirds of which is in Montenegro and the remainder in Albania. It is surrounded by dramatic karst mountains and contains an array of wildlife with more than 260 species of birds, traditional fishing villages, islet monasteries and pristine beaches. Magnificent scenery gets rave reviews in this national park where ice and water have carved a dramatic landscape from the limestone. Forty-eight peaks soar to over 2000 metres/6500 feet in altitude.

Consider a Montenegro Vacation, an Up-and-Coming Destination in Europe

Consider an additional stopover to your Montenegro vacation at one of Goway's other European destinations. You can choose from a Paris vacation, a London vacation or an Amsterdam vacation. This can be done stopping over en route to or from Montenegro.