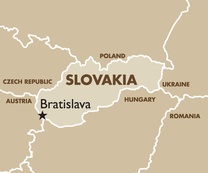 Slovakia is located in Central Europe and bordered by Austria to the west, the Czech Republic to the north-west, Hungary to the south, Poland to the north and Ukraine to the east.  The north and central areas are mountainous whereas the south is low-lying. It is a small country with beautiful landscapes to be enjoyed on a Slovakia vacation and incorporates the highest part of the Carpathian Mountains known here as the Tatras of which the highest point is 2655 metres/8710 feet in height. Slovakia features natural landscapes, mountains, caves, medieval castles and towns, folk architecture, spas and ski resorts. It has 9 national parks, 12 limestone caves open to the public, some of which are UNESCO World Heritage Sites, the highest per capita number of castles in the world and numerous mineral and thermal springs resulting in many spa centres.

The capital of Slovakia is Bratislava with its beautifully restored centre full of Gothic, Baroque and Renaissance churches, houses and palaces, cobblestone streets, fountains, pleasant cafes and a lively and cosmopolitan atmosphere. It is a historical city to be experienced on a Slovakia vacation known for its old-world charm and interesting architecture and has been part of the Roman Empire, the Kingdom of Hungary and the Hapsburg Monarchy.

Kosice is the second largest city in the country with the easternmost situated Gothic Cathedral in the World, the oldest European coat of arms, a great historical city centre with a Cathedral Complex, numerous churches, palaces and interesting museums.

Presov is another historical city to be visited on a Slovakia vacation whose wealth and influence came in the 15th to 17th centuries, the periods most remarkably represented in the historical buildings in and around the town square. The church at its centre dates from the 13th century, but its prize feature is the slightly later Crucifixion carved by Master Paul of Levoca. It has several museums, chiefly those dedicated to Judaism and salt mining.

Banska Bystrica was one of the most important mining towns of the Austro-Hungarian Empire. It has a beautifully restored square, many churches, castles and museums and a memorial to the Slovak National Uprising.

Bardejov is a spa town in north-eastern Slovakia. It has numerous cultural monuments in its completely intact medieval town centre and is a UNESCO World Heritage Site.

Bojnice has the most visited castle in Slovakia which is almost intact with beautifully preserved interiors. It is reminiscent in the style of a French chateau.

Banska Stiavnica is a medieval mining town in central Slovakia and is also a UNESCO World Heritage Site. It is a town with Renaissance palaces, 16th-century churches, elegant squares and castles. The urban centre blends into the surrounding landscape which contains vital relics of the mining and metallurgical activities of the past.

Levoca is a magnificent medieval town surrounded by walls with a unique renaissance town hall, burgers houses, numerous churches and St. James Cathedral where the biggest Gothic wooden altar in the world is located.

The High Tatras contain the largest national park in Slovakia and are a centre for winter sports and hiking. Slovak Paradise National Park is famous for beautiful canyons and ravines with many waterfalls and rocky formations created by streams.

So Many Good Reasons to Consider An Eastern Europe Vacation

Consider an additional stopover to your Slovakia vacation at one of Goway's other European destinations. You can choose from a Paris vacation, a London vacation or an Amsterdam vacation. This can be done stopping over en route to or from Slovakia.