Andalusia is a unique region in Spain unlike any other part of the country to be experienced on a Spain holiday.

Three Andalusian cities, on a trip to Spain, worth visiting are all conveniently contained within the same geographical region of Southern Spain. A mixture of cultural influences left by 3 religions, Islam, Christianity and Judaism, greatly influenced the architecture and the character of each Granada, Seville and Cordoba.

Granada has a beautiful, scenic setting with the snow-capped Sierra Nevada mountain range towering in the background. The Alhambra Palace, a UNESCO World Heritage Site, overlooks the city from the top of a hill. It has an extensive series of beautiful palaces and gardens dating back to the 14th Century. It has been a fortress, a palace and a city within a city. Its architecture is dazzling. In the centre of the Alhambra is the immensely large Palace of Charles V, a magnificent example of Spanish Renaissance architecture. This complex was the residence of the Kings of Granada. Adjacent to the Alhambra is the Generalife, the “Garden of Paradise” and a series of beautifully laid-out gardens containing courtyards, archways, pathways, pools, fountains, waterfalls and flowers.

Granada’s Cathedral dates back to 1523 and is the burial place of many Catholic Monarchs including Queen Isabella (who encouraged Christopher Columbus to sail across the Atlantic). Its stunning interior contains some wonderful sculptures and interesting glass windows. A fascinating district in Granada is the Alcaiceria close to the Cathedral, a neighbourhood of narrow streets and alleyways decorated with Moorish-styled arches. It was originally the site of the Great Bazaar of Granada in medieval times but was burnt down in 1843. Today it is home to a number of craft and souvenir shops selling ceramics, silks, jewellery and spices. A stroll along the banks of the River Darro with its 5 bridges will be rewarded with a wonderful array of distinguished Arab houses, ancient churches and mosques, lovely plaza convents as well as many pleasant bars and restaurants. The Albaicin is an old Arab Quarter made up of a labyrinth of narrow streets. A walk through this neighbourhood with its ancient Spanish/Muslim architecture will take you back to historical times on a trip to Spain.

Cordoba has been the centre of several civilizations, Roman, Arabic and Christian which have all left their mark on the city. Originally founded by the Romans, it was then taken over by the Moors and later, taken back by the Christians. For this reason, you have Roman relics which include the remains of a Roman wall, a temple, a forum, an amphitheatre and several other archaeological sites, all to be experienced on a holiday in Spain.

The Great Mosque of Cordoba, also known as the Mezquita, is one of the world’s largest and greatest Islamic buildings and is a symbol of the importance and sophistication of the Islamic period as it related to Cordoba at a time when it was Western Europe’s largest and most cultural city. The mosque is unique in its architectural style. It is a breathtakingly beautiful building inside and out. Following the conquest of Cordoba by the Christians, the Mezquita was used as a cathedral which took 250 years to complete and because of this, shows off a range of architectural styles including Gothic, Renaissance and Baroque.

Another of Cordoba’s treasures is the Alcazar (fortress) built by the Christians in 1328. This fortress, built by the Arabs, includes a castle with battlements and some attractive gardens. The gardens where you can spend some relaxing time have a wide variety of plants, palm trees, cypresses and orange and lemon trees.

Cordoba's medieval quarter is called "La Judería" (The Jewry) as it was once the home of the Jewish community. It is now a labyrinth of winding, narrow streets, shady courtyards and picturesque squares. Interesting museums in Cordoba include the Centro Flamenco Fosforito, probably the best flamenco museum in Andalusia where you can learn about the history of the guitar and all the Flamenco greats and the Museo de Bellas Artes (Museum of Fine Arts), the main art gallery of Cordoba mainly exhibiting paintings by local masters. 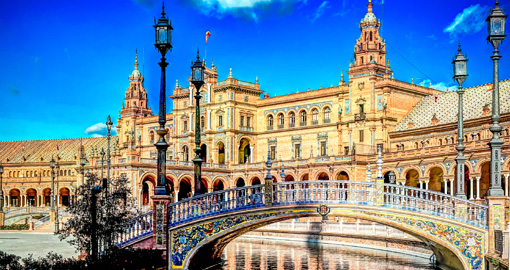 The Moorish influence in Seville is very apparent on Spain holidays. This city is larger than the other two being Spain’s 4th largest and has a vast number of attractions. The city has 3 UNESCO World Heritage Sites, the Alcazar, the Cathedral and the General Archive of the Indies. The best known is the Alcazar Palace built in the 1300s but expanded and reconstructed many times over the centuries. Today, it is still used as a Royal Palace with many rooms, magnificent halls and courtyards all hidden behind the walls. The Alcazar is divided into sections dating through a succession of eras which include Moorish (11th-12th Century), Gothic (13th Century), Mudejar (14th Century), and Renaissance (15th-16th Century). The heart of the Alcazar is the Mudejar Palace with its Mudejar architecture. (The Mudejars were the Moors who stayed on in Spain after the Christians took over the region). There are also extensive gardens which are exotic in style with both Moorish and Renaissance influences.

Seville’s enormous Cathedral is the third-largest in the world after the Vatican and St. Paul’s in London, built on the site of a 12th Century mosque, the minarets of which still exist. It is an art gallery it contains well-known works by artists such as Goya, Murillo and others. Inside the cathedral is the monumental tomb of Christopher Columbus supposedly containing his bones brought here from Cuba in 1898. The main chapel has possibly the largest altar in the world with a gold leaf design of the story of Jesus. The General Archive of the Indies is one of the most important document collections about the conquest of the New World.  It is housed in a 16th Century building and has80 millions pages of documents! This is open to the public with exhibits including maps and documents relating to Spain’s Colonial days. It is a story about Spain’s discoveries, explorations and conquests with letters written by Christopher Columbus on display.

The Museum of Fine Arts of Seville or Museo de Bellas Artes de Sevilla has a collection of mainly Spanish visual arts from the medieval period to the early 20th century. One of Seville’s most photographed landmarks is the Torre del Oro (Tower of Gold), a watchtower built in the 13th Century, located on a wide promenade near the river bank. It was part of the city's defensive walls. Seville also has a Flamenco museum which is spread over 3 floors of an 18th Century palace. The collection includes sketches, paintings, photos plus dresses and shawls. There are nightly Flamenco concerts in the courtyard of the museum to be enjoyed on trips to Spain.