The Spanish Basque region is in north-east Spain and runs along the coastline from the French border to Bilbao in the west. It has its own language, traditions and landscapes which make it a special region with much to offer on a Spain holiday. It is well-known for its outstanding distinctive cuisine. 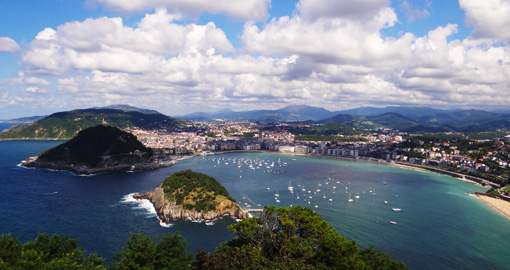 San Sebastian is a stunning and sophisticated, Internationally-renowned city and resort. It lies in a bay and has twin peaks at each end of an excellent sandy beach, somewhat reminiscent of Rio de Janeiro. The beachfront runs the length of the bay with the Old Town at one end and a modern shopping district at the other. San Sebastian has one of the best beaches in Europe. It is also known as a culinary capital of Spain with around 30 Michelin-rated restaurants   You can enjoy a walk up the twin peak of Monte Igueldo (or you can take the funicular) for great views of the city and also walk up the other twin peak, Monte Urgull through woodland to a castle. There are actually two main beaches; the central beach is La Concha (the shell) due to its shape and La Ondarreta to the west. Worth checking out is the Miramar Palace built in the late 19th Century with its lovely park. A must is a visit to the Old Town of San Sebastian. The heart of the Old Town is the Plaza de la Constitution. In this colourful district, you will find numerous restaurants and bars offering the “national” snack, Pintxos to be enjoyed on a trip to Spain. This is something edible (meat, fish, cheese) on a stick and comparable to tapas.  There are some lovely old churches from the 16th and 18th Centuries and a 16th Century monastery.

Bilbao, also, on the coast, is not a resort but more of a city with a cultural heart. It is extremely attractive architecturally oozing lots of character. There is no doubt the Guggenheim Museum is one of modern architecture's most outstanding buildings. Designed by Fran Gehry, this shining edifice, made of titanium, cannot be missed with its riverside location. Immediately outside is the whimsical puppy designed by Jeff Koons. It is a 12 metre/37 foot-tall Highland Terrier made up of thousands of begonias. The museum hosts many temporary exhibitions of modern art and design. The Casco Viejo, Bilbao’s atmospheric old quarter, is full of charming streets, numerous bars and many unusual shops. In the centre are Bilbao’s original seven streets, “Las Siete Calles”, which date from the 15th Century. The 14th Century Gothic Santiago Cathedral has a splendid Renaissance entranceway and pretty little cloister. On Sunday mornings, there is a lively flea market here selling secondhand books and records plus other paraphernalia. The Museo de Bellas Artes houses a collection that that exhibits everything from Gothic sculptures to 20th-century pop art with works by famous Spanish painters such as Murillo, El Greco, and Goya plus local Basque art, all to be visited on Spain holidays. . 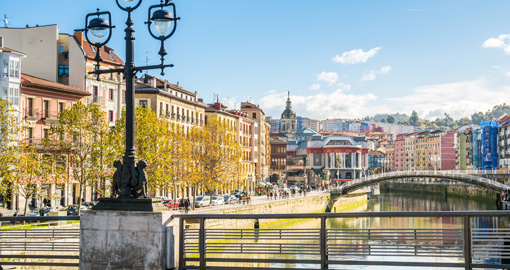 On a trip to Spain, head inland to the city of Pamplona with its narrow streets. It is world-renowned for one of Spain’s most famous festivals, the Running of the Bulls held each year in July. Pamplona is also a city full of history and tradition. Its old buildings and streets are well-preserved, dominated by churches and medieval walls. The Castle Square (Plaza del Castillo) is the central point in the Old Town, lined with restaurants, cafes and hotels. It was here that Ernest Hemingway worked on his book, “The Sun Also Rises.”. Estafa Street is where the Running of the Bulls takes place. There are many other ancient and interesting buildings which give Pamplona its character.

Vitoria-Gasteiz is the capital of the Spanish Basque region and a multicultural city emphasizing the arts and gastronomy. It was the first Spanish city to be awarded the title of European Green Capital (in 2012). The old part has some of the best preserved medieval streets and plazas in the region and is one of the very few cities to have two Cathedrals. The Cathedral of Santa Maria, known as the old cathedral, is a 14th Century Gothic building containing works by Flemish and Italian painters such as Rubens and van Dyck. The new cathedral was built in the 20th Century. Vitoria’s medieval city centre has many buildings which date back to the 1500’s and earlier. The centre is partly surrounded by a wall from the 11th Century with several impressive watchtowers. The Bendana Palace which contains a museum dedicated, unusually, to playing cards and the Escoriaza-Esquivel Palace are examples of Renaissance architecture that should not be missed. Vitoria is also home to some outstanding wineries, one designed by Frank Gehry. 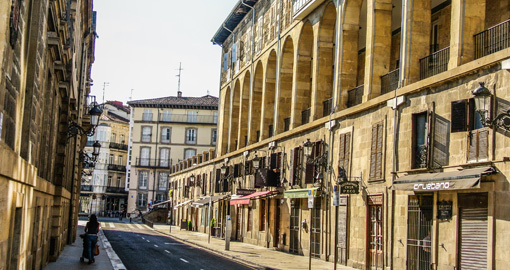 A special palce on a trip to Spain is Guernica, a town on the coast and is best known for the bombing it endured from Nazi Germany in 1937 during the Spanish Civil War when it was razed to the ground and which inspired Picasso’s famous painting of the same name. There is a reproduction of Picasso's Guernica consisting of a mosaic of tiles which shows, in puzzle form, Picasso's great work, the original of which is currently on display at the Reina Sofia Museum in Madrid. The Biscayan Assembly building and the Tree of Guernica both survived and offer an insight into the history of the Basque people such as the Basque independence movement. The Guernica Tree is the tree that was used as a meeting point for the Basque communities and the Lord of Biscay where a set of laws was established that granted the Basques autonomous rule

Consider an additional stopover to your Spain vacation at one of Goway's other European destinations. You can choose from  a Paris vacation, a London vacation or an Amsterdam vacation. This can be done stopping over en route to or from Spain.