The Canary Islands are located 100 kilometres/62 miles west of the North African coast opposite Morocco in the Atlantic Ocean. Due to their position, they offer a subtropical climate with hot summers and warm winters perfect for a Spain holiday. There are a number of islands that make up the whole of the Canary Islands. However, the principal ones and most important are Tenerife, Gran Canaria, Lanzarote and Fuerteventura. The geographic makeup of these is varied. 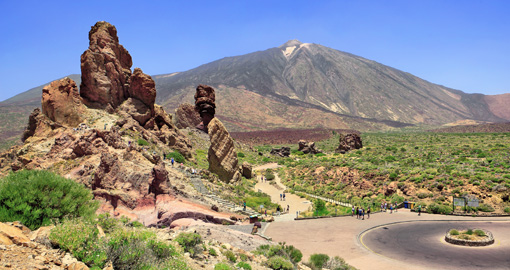 Tenerife is the largest of the Canary Islands and is the most contrasting on a trip to Spain. Not only does it have beaches but it has an amazing hinterland. The beaches, interestingly, are affected by the volcanic aspects of the island resulting in black sand beaches. There are numerous beaches located around the 270-kilometre/165-mile coastline which also is blessed with high cliffs and natural pools. Some of the best beaches are around the main town, Puerto de la Cruz and at Los Gigantes, San Juan, Playa Las Americas, Los Cristianos and Candelaria. Tenerife is one of the best places in the world for big game fishing and a number of companies offer fishing trips. One very important attraction is the Teide Volcano which is the highest mountain in Spain and the third tallest volcano on earth on a volcanic ocean island. Teide National Park is breathtakingly beautiful. On a visit to the volcano, you pass through the arable countryside, then, going higher, through pine forests, eventually reaching something of a “no man’s land” on a high plateau. A visit to the amazing Loro Parque can take nearly a whole day. This park is mainly devoted to parrots. It is home to the world’s most important parrot collection with over 300 species. It also offers seal and dolphin shows. It has the world’s largest Penguinarium where the Antarctic climate is reproduced. Puerto de la Cruz, the main town is an old fishing port full of narrow cobblestone streets and colonial architecture. 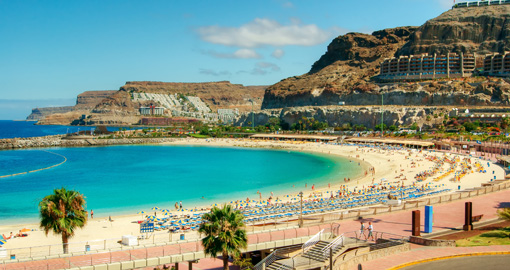 There are many reasons to visit Gran Canaria on a Spain holiday. The variety of landscapes is stunning. On its 236-kilometre/145-mile coastline, there are peaceful coves and beaches in the south of the island contrasting with the more commercial and popular tourist areas such as Las Palmas de Gran Canaria and San Bartolome de Tirajana in the north. Gran Canaria is a great place for water sports such as scuba diving, surfing, sailing and windsurfing. The capital of Gran Canaria is Las Palmas which has some historic neighbourhoods, an interesting cathedral and some colonial architecture from the 15th and 16th Centuries. The House of Columbus is a former palace of the governors of the island which was used by Christopher Columbus as a residence during his stay there. It is now devoted to Columbus with maps. Puerto de la Luz and the port and beach of Alcaravaneras are the two best places to enjoy nightlife and some of the best restaurants.

Fuerteventura is outstanding for its magnificent white sand beaches and year-round sunshine. It is much less frequented than either Tenerife or Gran Canaria. There are more than 150 beaches in the north and south of the island, spread over 340 kilometres/210 miles of coastline. There are several places to enjoy the island on a trip to Spain. In the north is Corralejo, a town with extensive beaches of dunes and the Corralejo Nature Reserve. On the east coast, you will find cliffs and small, hidden coves. The capital, Puerto del Rosario is a lively commercial city with a collection of houses on whitewashed streets and a picturesque promenade. It also offers excellent beaches such as Puerto Lajas, Jarugo and Playa Blanca plus hotels, restaurants, shops and sports facilities for surfing, windsurfing and sailing on Spain holidays. 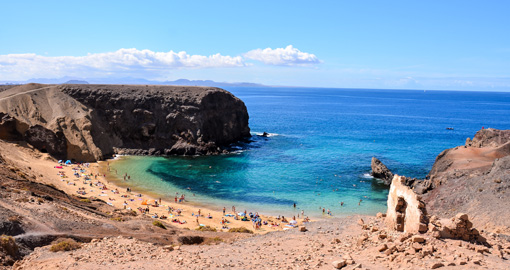 Lanzarote is the most volcanic-looking of the Canary Islands. It has a somewhat "lunar" landscape, covered in craters, canyons and valleys of solidified lava. There are beautiful beaches with black or golden sand. The major tourist centres are Costa Teguise, Playa Blanca and Puerto del Carmen. You can play golf in a protected nature area, go deep-sea fishing and surf. The waves are considered some of the best in Europe. The capital, Arrecife, is a quiet, beautiful port city situated on the eastern coast of the island with a historic centre offering museums and shopping during your trip to Spain. A long promenade runs along the coast of Arrecife. The Timanfaya National Park is a great place to view the island's volcanic ecosystem. The park is surrounded by the Volcanoes Nature Reserve where fields of ash and lava run down to the sea.