The Costa del Sol (literally the Sunny Coast) is aptly named as its climate ranges from hot in the summer to mild in the winter. The annual average number of days of sunshine is 320. One of the main attractions of a Spain holiday is the variety of beaches over a coastline stretching 160 kilometres/100 miles. The resorts vary from touristy to quaint. For golfers, this is a haven as the region has the highest concentration of world-class golf courses in Spain – more than 60.

Malaga is the capital of the Costa del Sol. It is the main gateway to the region and is a city well worth spending time in. It is a cosmopolitan centre with an excellent selection of museums (around 30 in total) including the Picasso Museum (Malaga is the birthplace of the artist), great seafood restaurants and lively nighttime entertainment. It also has a number of good beaches close to the city to be enjoyed on a trip to Spain.

Marbella is probably the best-known resort on the Costa del Sol due to its reputation for elegance and style reflected in its attraction to the rich and famous.  It has been likened to St.Tropez on the French Riviera. Marbella offers a harbour for yachts, first-class golf courses, fine dining, nightlife and great beaches. The old town, with its narrow cobblestone streets and flower-filled plazas, has many excellent shops and art galleries.

Torremolinos was one of the first resorts to be developed. Once a sleepy fishing village, it is a contrast today with its extensive selection of hotels and rental apartments. It is a fairly busy resort with clean sandy beaches, lots of entertainment, activities and nightlife. The Calle San Miguel is a pedestrian thoroughfare lined with shops attracting many visitors. The old fishing district of El Bajondillo is a picturesque area full of restaurants and a beach. Another nearby fishing village is La Carihuela with attractive houses and gardens with magnolia, rose and azalea trees. Also, close by are golf courses.

Fuengirola is another very popular resort on trips to Spain and suitable for families, mainly due to its fantastic beaches which stretch some 7 kilometres/4 miles. Water sports are popular here. Once a fishing village, it has been transformed into a resort with character offering many upscale tapas bars, good cafes and restaurants and fashionable boutique stores. It is also a town worth exploring with its narrow streets.

It is a resort which has three distinct areas. There is the old village, the commercial centre of Arroyo de la Miel and the coastal area with its many hotels, beaches measuring 10 kilometres/6 miles in length, amazing nightlife and a marina with excellent port facilities. Lake Paloma Park has a central lake which attracts many different types of birds. The aquarium here is well worth a visit on a holiday in Spain. There is also an art gallery showcasing local works of art at the Cultural Centre.

Estepona, although very popular, has been able to retain its charm and character. For example, the tapas bars serve traditional Spanish dishes. There are cobblestone streets featuring unusual shops. When it comes to beaches, there is an abundant choice allowing you to decide on the type of beach that suits your taste from lively to quiet, from scenic to deserted. There is also a wide range of golf courses from which to choose for both novices and professionals. There are archaeological sites dating back to Roman times including an aqueduct. For cultural pursuits, there are a number of art galleries and museums including one devoted to Bullfighting. 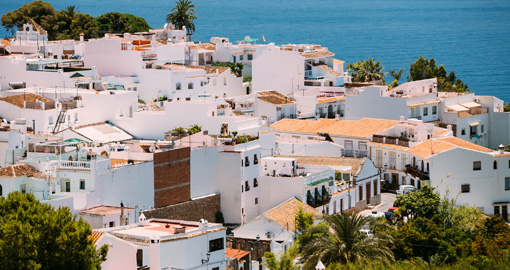 Another special and unspoilt resort is Nerja which is located to the east of Malaga. Once again, a converted fishing village, it is a resort with 16 kilometres/10 miles of sandy beaches and a major water sports centre offering water skiing, scuba diving and sailing. Nerja has a backdrop of a dramatic mountain range. The old quarter of the town is still virtually unchanged with narrow, winding streets and whitewashed houses. The Balcon de Europa (Balcony of Europe) is a magnificent promenade situated on the edge of a towering cliff with panoramic views of the Mediterranean Sea and the mountains. The 17th Century church here is a mixture of Baroque and Moorish styles. A major attraction in Nerja is the caves which include archaeological treasures such as prehistoric paintings. One very large cave has been converted into a concert hall.

Puerto Banus is a man-made trendy and chic resort, known for its luxury marina and upscale designer shops. It is also known as Costa del Sol’s playground for the rich with its energetic nightlife and expensive restaurants and lively bars. It is a great place to “people-watch” on the Spain holidays.

Inland are two very attractive towns easily reached from the Costa del Sol on a trip to Spain. Mijas is a beautiful small village tucked into the mountains of the Sierra Nevada which has been able to retain its traditional Andalusian way of life. Many artists and writers have made their homes here. You can wander through its cobblestone streets checking out the crafts stores selling hand-made pottery and affordable paintings and prints by local artists. 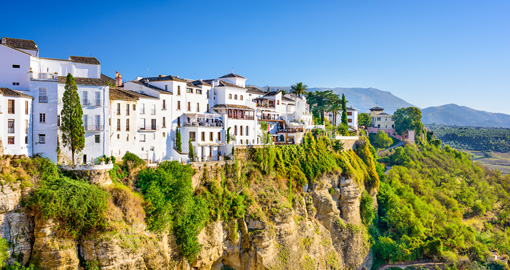 Ronda is one of Spain’s oldest towns located in and around a deep gorge spanned by an impressive bridge. It is a very pretty town with beautiful architecture from the Moorish period up to the 19th Century and winding streets with white-washed houses. There are some interesting museums and many good places to eat and drink. The town is divided into two parts, La Cuidad, with its maze of narrow streets, beautiful churches and architecture and El Mercadillo which has broad streets and buildings dating back to the 18th  and 19th Centuries. It has been home to artists and writers such as Alexandre Dumas, George Eliot and Ernest Hemingway and Orson Welles.