A World in One Country: Kruger, Hluhluwe, Cape Town & More 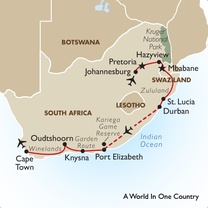 See the best of South Africa on this 14 day group tour from Johannesburg. Spot the Big 5, sun yourself on Durban’s beaches and explore the famous Garden Route on your way to the Cape.

The bustling nerve centre of South Africa’s economy, Johannesburg is the entry point of your tour. Consider arriving a day or two early to visit fascinating attractions such as the Military History Museum or the Apartheid Museum. Depart for nearby Pretoria and enjoy an orientation tour of South Africa’s de facto capital.

Onward to Mpumalanga, the gateway to Kruger National Park. Stop at spectacular God’s Window and Blyde River Canyon – the world’s 3rd largest – where fiery red cliffs look out over the surrounding forest. See them from a different angle on an interpretive boat cruise along the River, with a stop at the famous Three Rondavels. On reaching Kruger, get an early start for your best chance at glimpsing the Big Five. Then take another drive in the afternoon, before an elephant interaction experience brings you up close and personal with one of Africa’s most magnificent animals.

Cross into Swaziland and visit the thriving markets of Mbabane before spending the night in Ezulwini Valley, also known as ‘The Valley of Heaven’. Nearby Zululand conjures images of brightly coloured, fearless warriors, and the reality – though more modern – is no less colourful. At charming St Lucia, see hippo, crocodile and over 360 bird species, then go on to Durban to enjoy magnificent beaches. With a full afternoon at leisure, consider a city tour or a trip to U-Shaka Marine World.

Fly to Port Elizabeth for your transfer to Knysna, your first stop along South Africa’s famous Garden Route. Built around a tranquil estuary, the city’s attractions include the spectacular ‘Heads’ that form a gateway to the sea and nature reserves dedicated to the area’s amazing bird life.

Arrive in Cape Town for 3 nights in South Africa’s most beautiful city. You’ll explore the many sights of the Cape Peninsula, such as breathtaking Chapman’s Peak and the penguins of Boulders Beach. The following day is devoted to the Cape Winelands, for a taste of South Africa’s increasingly popular Stellenbosch and Paarl wine regions. Try some of the area’s famous Cabernet Sauvignon, along with many other varieties grown here.

On arrival in Johannesburg at OR Tambo International Airport, you'll be met by your representative and transferred to your hotel. Johannesburg is the largest and most populous city in South Africa. It is also the source of a large-scale gold and diamond trade due to its location on the mineral-rich Witwatersrand range of hills. The remainder of the day is at leisure and unescorted. Why not enjoy an optional (own account) sightseeing tour of Soweto, learn more about the struggle for freedom in South Africa, or simply relax at your hotel? At 7:00 pm we will meet at reception for a briefing on the tour and a chance to meet fellow travellers.

Depart Johannesburg after breakfast and head for Pretoria, South Africa's capital city, for a short orientation tour, before continuing to the Mpumalanga Province, known as "Paradise Country". Dropping several hundred feet into the lush subtropical region of the Lowveld, we travel via the historic towns of Dullstroom and Lydenburg. After traversing the famous Long Tom Pass, we travel via Sabie and arrive late afternoon in Hazyview, the safari hub of the Kruger National Park.

After early morning breakfast, we'll drive along the spectacular 'Panorama Route', offering views of amazing scenery including the 26-kilometre long Blyde River Canyon (home to the Three Rondavels), Bourke's Luck Potholes, and historic God's Window, a breath-taking view (weather permitting) of the edge of the escarpment taking in the Kruger National Park. We arrive back in Hazyview in the late afternoon where the remainder of the day is at leisure to relax. Consider joining (for own account) a Shangaan Cultural Dinner experience, for an African dinner feast and an evening of traditional Shangaan storytelling and entertainment.

The day begins with early morning coffee or tea, followed by a thrilling open vehicle game safari (with English speaking game ranger) through the Kruger National Park with a pre-packed breakfast. Kruger is one of the world's greatest national parks, home to a stunning array of wildlife. Search for the 'Big Five' (rhino, buffalo, lion, leopard, and elephant) as well as prolific birdlife and numerous other game species. The game safari includes a visit to the Anti-Poaching Dog Unit (Project Watchdog), that was established because of the increase in rhino poaching worldwide. Meet the dogs that are trained to track poachers in the field, and detect firearms, ammunition, and wildlife products that enter and exit through the Kruger National Park gates. A portion of the trip price of this MAKE TRAVEL MATTER Experience goes towards ensuring that these dogs receive the best possible care in support of the vital work they do. The experience directly advances UN Global Goal 15: Life on Land. The afternoon is at leisure at your hotel. An afternoon open vehicle game drive is available as an extension to the morning game drive (optional and for own account). Why not experience an exclusive el fresco bridge dinner, overlooking the magnificent Sabie River under a star-studded sky (for own account)?

After breakfast, we will continue south through eSwatini (Swaziland), before re-entering South Africa. Travel into Zululand, passing traditional round huts and endless vistas. There is an option to enjoy an afternoon open vehicle game safari (optional and for own account with an English-speaking game ranger) in the Hluhluwe-Umfolozi Game Reserve, which contains an immense diversity of fauna and flora and is particularly famous for its conservation of black and white rhino.
Overnight in Hluhluwe-Umfolozi region.

This morning we will join a cruise on Lake St Lucia (depending on favourable weather conditions) before departing for Durban.

Our journey takes us past traditional Zulu Kraals, Eucalyptus plantations, and sugar cane fields. We arrive early afternoon and the remainder of the afternoon is at leisure to enjoy the golden beaches of the Indian Ocean. Overnight in Durban (Umhlanga).

After breakfast, transfer to Durban (Umhlanga) airport for the short southward flight to Gqeberha (Port Elizabeth), where we will be met by our representative and once everyone has arrived, we set off to explore the magnificent beauty of the indigenous Tsitsikamma Forest. Visit the spectacularly beautiful Tsitsikamma National Park and Storms River Mouth (weather permitting). We'll arrive at our hotel in Knysna, known as the oyster box of South Africa, nestling on the banks of a beautiful lagoon in the heart of the Garden Route. Overnight in Knysna.

After breakfast, journey into the magical Knysna Forests, the stamping ground of the elusive Knysna elephants. Discover the stories of the woodcutters who worked the forests, the elephants that were hunted to extinction, and the discovery of gold.

Our expedition into the forest starts with a visit to the Dalene Matthee Big Tree Memorial. The enormous Yellowwood tree of over 880 years was named after Matthee, the best-known author of four books on the Knysna Forest. Enjoy a delicious lunch, in the forest, of traditional cuisine and local treats at the Diepwalle Tea Garden. The afternoon concludes with a visit to the Forest Legends Museum, that exhibits tools and household items used by the woodcutters, the colourful Old Suzie steam engine, that was used to generate power, and the stately Old Forester's House, home of forester David Ernest Hutchins, who was the first person to manage the indigenous forest in a sustainable manner. Overnight in Knysna with dinner at Drydock Restaurant, renowned for dishes with glorious aromas and flavours, using the finest local ingredients and freshly picked herbs from the region.

Travel through the Outeniqua Pass to Oudtshoorn, known as the 'ostrich capital' and the centre of the world's Ostrich farming industry. Along the way, visit the 'Map of Africa', an extraordinary viewpoint in Wilderness. In Oudtshoorn, we'll visit an Ostrich Farm for a fun-filled interactive tour and light lunch that includes local specialities such as Ostrich Steak, before taking a tour of the spectacular limestone caverns of the Cango Caves, one of the world's great natural wonders, sculpted by nature through the ages. We arrive at our hotel in the late afternoon to check-in and relax before dinner (for own account). Overnight in Oudtshoorn.

There is an option (for own account and subject to availability) to enjoy an early morning Meerkat Safari. Witness these incredible wild habituated creatures emerging out of their burrows, in time to soak up the sun before they head about their daily activities (weather permitting). A portion of the monies paid by guests for this MAKE TRAVEL MATTER Experience go towards the Buffelsdrift Foundation, that focuses on Wildlife conservation in the Klein Karoo region, habitat conservation, and the local community. The experience directly advances UN Global Goal 15: Life on Land. After this thrilling experience, head back for a delicious breakfast. After breakfast, the journey continues through the 'Little Karoo' to Barrydale, where you will have the opportunity to visit a local farm school, interact with the children and teachers, spend time with them in the classroom, learning more about this rural community. A portion of the trip monies goes towards our Barrydale Farm School Development Fund, that supports the local education of underprivileged children in rural communities. (The school visit is subject to the school being open). Continue to Cape Town, spectacularly set at the foot of Table Mountain. Overnight in Cape Town.

Enjoy a full day at leisure. Perhaps join a sightseeing tour of Cape Town and Table Mountain (own account) or join us for a Marine Big Five Safari (own account), where you may see great white sharks, whales, Cape fur seals, and a variety of seabirds on a 2-hour boat cruise with marine biologists on hand to explain more about these amazing animals that visit our shores.

Although a small city, Cape Town is packed with sightseeing attractions, excellent bars, cafés, and restaurants as well as colourful craft markets. Enjoy a fun-filled evening with interactive entertainment and delectable food at Gold Restaurant.
Overnight in Cape Town.

Enjoy a full-day tour of the Cape Peninsula, offering some of the most spectacular coastal scenery in the world. Drive through Sea Point, the seaside village of Hout Bay (where you can enjoy an optional and for own account seal island boat cruise), and then on to Cape Point where (by tradition) it is said that the Atlantic and Indian Oceans meet. We'll return to Cape Town by way of Simon's Town, where we visit the Penguin colony at Boulders Beach (entrance fee for own account) and Fish Hoek fishing village. Overnight in Cape Town.

Enjoy some last-minute shopping (unescorted) or sightseeing (own account). The Robben Island Tour (for own account &amp; time permitting), which departs from the Victoria &amp; Alfred Waterfront, offers a fascinating excursion, or perhaps just wander through the variety of shops and boutiques catering for all tastes and budgets. Later you will be transferred to the airport, harbour, or railway station for your onward journey.

Alternative accommodation may be confirmed due to availability, these will always be in the same category or higher, at no additional charge.

If Goway is not booking your airfare, please ensure that the flight booked from Durban to Port Elizabeth on day 8 is no later than 10h30.